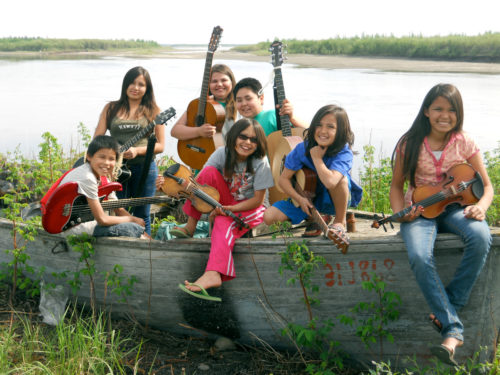 [Episcopal News Service] They say music’s a universal language. To the Rev. Belle Mickelson of the Diocese of Alaska, it’s also a healer and community builder.

Almost two decades ago, she spent an evening drinking tea and playing music with the elders of Galena, a central-Alaskan village along the Yukon, after leading a 4-H fisheries workshop there. “I asked, ‘How are things in Galena?’ They were so depressed and discouraged because of all the suicides.”

The suicide rate in Alaska is twice the national average and even higher among native Alaskans. The state also has one of the country’s highest per-capita alcohol-consumption rates.

“I thought … what could I do to help?” Mickelson recounted. Noticing music’s positive impact on children, she launched a 4-H music camp for children in Cordova 18 years ago. “After five years, I knew every place should have one.”

“In the midst of all this, I got the call to become a priest, and that’s what I wanted to do, was to take this program, this music, out to the villages to help with suicide and drugs and alcohol [abuse prevention].” 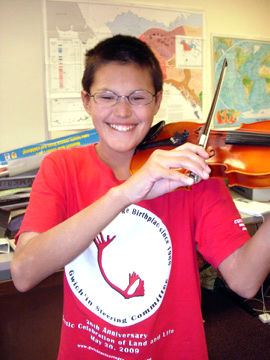 In the five-plus years since graduating from seminary, she’s been running music camps in the diocese’s native villages in a program called Dancing with the Spirit. She spends half her time in Cordova, where she works part-time at St. George’s Episcopal Church, half her time traveling. “My parish is basically lay-led half of the time.”

While running music camps, Mickelson also helps at the local churches, leading services if they don’t have a priest.

“I feel, really, that I have two calls. My main one is to take the music program out in the villages,” she said.

Schools, tribal councils and individual donations fund Dancing with the Spirit, which so far has reached 22 native villages and held camps in the larger Alaskan communities of Fairbanks, Anchorage, Cordova, and Juneau. In 2008, a $10,000 Episcopal Church Native American/Indigenous Ministries grant and $20,000 Lutheran Deaconess Society grant helped expand the program’s reach.

A $10,000 grant from the Episcopal Church’s Domestic Missionary Partnership in 2011 allowed the program to team with the Yukon Flats School District and offer a residential gospel guitar retreat in conjunction with a district volleyball tournament. “I really like the idea that we were the pep band for the volleyball game,” Mickelson said.

More than 100 youngsters continue to attend the original 4-H camp each summer, with many families coming from out of town and spending the week in Cordova. The 6- through 8-year-olds learn about Hawaiian culture and dance and how to play the ukulele. For the 8- to 18-year-olds, there’s fiddle and guitar instruction. “It’s primarily bluegrass and old-time [music], but there’s a couple of rock and roll bands every year, too,” Mickelson said.

St. George’s also works with the local Catholic and Baptist churches to offer a gospel-music family camp, with 65 children attending this summer. Cost is $50, with scholarships available. “If you don’t have $50, you can pay what you want,” Mickelson said.

At the Dancing with the Spirit camps, students take classes in various instruments, from guitar and fiddle to mandolin, bass and ukulele. Their teaching method uses colors to code the instrument’s chords. “Any junior high or high school kid can learn to play the fiddle in a week because it’s so easy when it’s color-coded, and the same with a guitar,” Mickelson said.

The instructors lead camp for a week each year but hope to visit more often. “Our goal is to go to each place two or three times a year,” she said.

Instructors receive pay, food and housing. Local instructors are paid an hourly rate to teach. “We always have at least two [teachers], depending on the size of the school.”

The instructors work with elementary school children in the morning, older students in the afternoons. At week’s end, the students perform in a concert, usually in conjunction with a “potlatch” or covered-dish supper, complete with square-dance instruction and Athabaskan fiddle tunes. “We just celebrate, and we try to have a community dance,” Mickelson said.

Dancing with the Spirit works with local musicians and teachers and tries to leave instruments behind at each village school that hosts a camp. “Our goal is to have every school stocked with instruments,” she said.

They want to see local people continue the program after they leave, she said. “I know that in a lot of schools, that’s what the kids do on their breaks: They go and play music. … What I would like to see is these local musicians hired like teachers’ aides to come in and work with the kids when we’re not there.”

Music typically is not part of the curriculum in small schools, “unless the teacher happens to be a music person,” she explained.

Shelby Fisher-Salmon, one of two native students on the Dancing with the Spirit board, is the lone senior among about a dozen students who attend the pre-K through 12th-grade Cruikshank School in Beaver, where her mother is the principal. Her hometown is a rural, native village of about 70 people about 100 miles north of Fairbanks. It’s reachable by boat, but people usually arrive via Navajo airplane, she said.

Fisher-Salmon started attending a Dancing with the Spirit camp at her school when she was about 12, learning to play guitar.

“I think everyone enjoys it,” she said of the camp. “When Belle comes … the whole school usually participates.”

Dancing with the Spirit and its mission to build community through music instruction for children has spread far beyond the diocese.

Students at the Cordova summer camp launched a band, Bearfoot Bluegrass, that’s “been successful beyond our wildest dreams,” Mickelson said. Started in 1999, the band won the Telluride, Colorado, bluegrass band contest in 2001. Today, it continues performing and leading workshops nationally under the name Bearfoot.

Cordova’s camp director, Kate Hamre, 27, played in the band from 1999 to 2010, starting at age 14. She now runs an Anchorage-based program called Bluegrass Camps for Kids that teaches music to 300 to 350 kids a year in eight to 10 camps in Alaska and elsewhere in the country, including Hawaii. She spends summers in her native Alaska and teaches during the school year at a private girls’ school in San Francisco.

Hamre’s first music camp experience came in Anchorage with another program, the Alaska Folk Arts Music Camp, directed by Mary Schallert and hosted by St. Mary’s Episcopal Church. Then she learned about the Cordova camp and joined a group of students who attended both.

“I learned fiddle and guitar and bass and all these different instruments,” she said. Every year, she’d look forward to seeing her friends and teachers. “It’s a great community to grow up in.”

That’s Dancing with the Spirit’s greatest benefit for children, she said, noting she’s still friends with people she first played music with as an 8- or 9-year-old. “First and foremost, it provides a great sense of community with adults and their own peers. Being a musician is just something that they will always have.”

Hamre sees academic benefits as well. “A lot of people don’t realize that music is pretty mathematical and creative at the same time. You’re using both left and right brains.”

Said Mickelson, “I think music and art are two ways that kids build up their self-esteem so that they can have the courage to tackle math and science and these kinds of subjects.”

While the program’s success is difficult to measure, she sees “the joy that comes into the community when you’re doing this,” she said, adding, “I can just tell you how healing it’s been, when there has been a suicide, for us to come in with our music.”

It’s a joy and healing she’d like to spread even further.

“I really dream of this as a worldwide program,” she said.