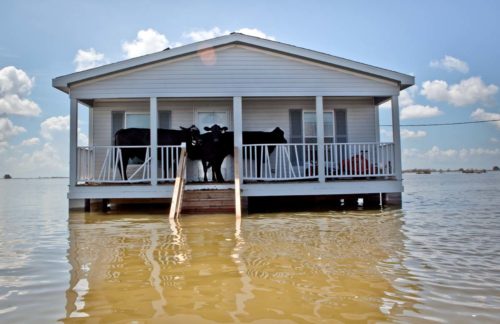 Updated Sept. 7 at 3:00 p.m. EDT to include information about flooding in Slidell, Louisiana.

[Episcopal News Service] It’s not always the hurricanes themselves that hurt south Louisiana, it’s the aftermath, and the recent Hurricane Isaac was no exception.

“It’s often not the falling water or wind that gets us; it’s the rising water after the storm that gets us,” Episcopal Diocese of Louisiana Canon to the Ordinary Mark Stevenson said Sept. 5 during a telephone interview with ENS. “Water should really only go one direction and that’s down, but it does have a tendency to come back up here.”

That rising water meant “there are some people who are really hurting out there and some people have been deeply affected by this storm,” Stevenson said.

“That being said, we’re also very fortunate in that we did not see the widespread regional damage that we saw with [Hurricane] Katrina in ’05 or even with [Hurricane] Gustav in ’08,” he said.

Isaac came ashore in Louisiana near the mouth of the Mississippi River as a Category 1 storm. According to the Associated Press , Isaac dumped as much as 16 inches in some areas, and about 500 people had to be rescued by boat or high-water vehicles. At least five storm-related deaths were reported.

The storm hovered over southern Louisiana and pushed a storm surge up the Mississippi River delta. It caused significant flooding in Plaquemines and St. John the Baptist parishes. Isaac inundated homes and left residents awaiting rescues from rooftops. About 6,353 people evacuated to state-run shelters, according to the Times-Picayune newspaper.

The Associated Press reported that Louisiana officials have preliminarily estimated that Hurricane Isaac damaged at least 13,000 homes in the state.

There was no major damage to diocesan churches or other properties, Stevenson said, although St. Timothy’s Episcopal Church in LaPlace was flooded.

Christ Episcopal Church in Slidell, another town that experienced flooding, did not take on water and most of its parishioners’ homes fared well, according to the Rev. Harry Jenkins, rector. Many residents had storm debris in their yards, he told ENS, and many were without power for several days and lost all of their refrigerated food.

Jenkins said his own home, which is elevated about 10-12 feet, had four feet of water underneath it. He and his family had stayed in a house adjacent to the church during the storm.

A few subdivisions in low-lying areas of Slidell did flood, and those families suffered much loss of property. Throughout those communities there are now piles and piles of damaged furniture, appliances, mattresses, carpet and other debris, Jenkins said. Old Town, a historic area of Slidell containing businesses and homes also flooded.  Many of these areas also flooded during Hurricane Katrina.

A sizable number of people suffered greatly, Jenkins said. “The people of Slidell are resilient and will pull together supporting each other,” he added. “The local churches are also working hard to reach out to help those people who are hurting. ”

Many of the people whose residential or business property suffered significant damage are finding that the repair costs “are not significant enough to get over the deductible level” of their insurance, Stevenson said.

Even in areas that escaped storm damage, Isaac took a toll on those Louisianans who live paycheck to paycheck, Stevenson said. “Folks were sort of living on the edge economically before the storm and the costs involved in preparation for a storm are just tremendous,” he explained. “And then afterwards with the economy being slightly more depressed because of the storm [it’s challenging] to stay on your feet.”

That economic impact is influencing the diocese’s approach to its post-storm recovery efforts. Stevenson said that while the diocese has gotten many offers of supplies and people willing to come to Louisiana to help, “we’re not really sure that is what we ought to be doing.”

Instead, diocesan staff is assessing the needs of people, partnering with other organizations in the hardest-hit areas where there is not a strong Episcopal Church presence and being “very targeted and very surgical” in its response.

Stevenson said the diocese wants to spend donated money locally to help people buy the supplies and repair materials they need, even including gas and food cards. Those local purchases have a “double benefit.”

“You can distribute [what’s been purchased] to people who are in need and you also get the economic boost locally,” he said. “That’s a really important part of all this. The economics weave throughout all of it.”

The diocese is working with Roman Catholic, Baptist and interdenominational organizations with whom it has partnered in the past to help as many people as possible in the days after Isaac. “We will leverage those relationships to reach the people where we don’t have a physical presence,” he said.

In addition, Episcopal Relief and Development has been working with Central Gulf Coast, Louisiana and Mississippi, building on partnerships established after Katrina slammed the Gulf Coast in 2005.

“They have been great,” Stevenson said, adding that in Louisiana, the organization is working with the Episcopal Community Services of Louisiana.

And, while Isaac was not as bad a storm as the Gulf Coast has experienced, the hurricane season is not technically over until the end of November.

“That’s a very important psychological – even spiritual – issue,” Stevenson said. “This idea of hurricanes is numbing,” especially to those who experienced the devastation of Katrina.

The memories of that storm “are so much in the system here that when this storm started to come, it’s everything you can do to put every ounce of energy into preparation and taking care of yourself that, when the event comes through and that adrenaline burns off, it’s exhausting. It’s exhausting physically, emotionally and even spiritually,” he said.

The diocesan staff discussed during a Sept. 5 staff meeting the need to meet with counselors and spiritual advisors to “just really get ourselves as individuals and as a group of staff and diocesan-wide leadership to get ourselves focused and fed by God so that we can do the work that he’s put before us.”