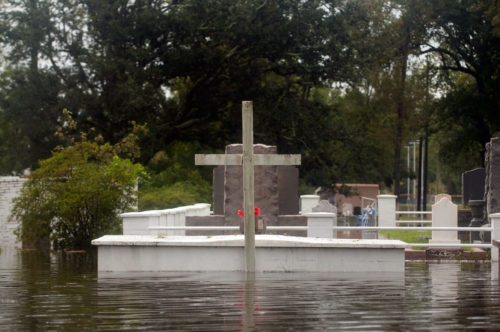 [Episcopal News Service] Editor’s note on Sept. 3: Since this article was published, the situation in some parts of Louisiana has deteriorated due to continued rising water and ongoing power outages. ENS plans updated coverage as new information is verified by the impacted dioceses.

Seven years after the catastrophic Hurricane Katrina, clergy in the Episcopal Diocese of Louisiana were mostly thankful as they began to assess the impact of Hurricane Isaac while the remnants of the storm, as it moved north, continued to drench parts of the state and neighboring Mississippi.

The worst reports from the diocese were of a tree falling onto a rectory and a church and church school taking in a couple of inches of water. Other reports mostly concerned power outages, shingles off roofs, minor water damage and glass breakage from high winds.

Some parishioners’ homes had several inches of floodwater and “the usual debris” associated with heavy storms, according to diocesan clergy who reported their assessments on an Aug. 30 conference call.

[At press time, no updates had been received from the Diocese of Mississippi.]

Although the recently fortified levees that protect New Orleans stood firm during Isaac’s pummeling, beyond the city hundreds of homes were underwater. At one point, half of the state was without power. Of the 60,000 New Orleanians who evacuated, several thousand are staying at shelters.

According to the Associated Press, Isaac dumped as much as 16 inches in some areas, and about 500 people had to be rescued by boat or high-water vehicles. At least five storm-related deaths have been reported.

Moderating the Louisiana diocesan clergy conference call, the Rev. Canon Mark Stevenson, canon to the ordinary, said that an adjuster for church insurance was already in the New Orleans area to help facilitate damage claims.

As the storm brought chilling reminders of the disastrous consequences of Hurricane Katrina exactly seven years ago, most of the clergy were relieved by the extent of Isaac’s impact throughout the diocese.

The Very Rev. Ken Ritter, president and CEO of St. James Place Retirement Community in Baton Rouge South, said there was no significant damage. Some parishes may not have power “but we seem to have been largely spared,” he said.

The Rev. Karen Gay, rector of Church of the Holy Communion in Plaquemine, an area impacted by significant floodwater, said: “We’re fine, we’ve lost a few shingles but we have power.”

The rectory at St. Matthew’s Episcopal Church in Bogalusa sustained some damage after a tree feel onto its roof, and the Very Rev. Canon Stephen Chad Jones reported that the Episcopal Day School at St. Patrick’s Episcopal Church in Zachary, where he serves as rector, is ankle deep in water in several of the classrooms. He said they were planning to pump the water out.

At Episcopal Church of the Annunciation in New Orleans, the roof developed a leak and the air conditioning unit fell off.

The Rev. Ron Clingenpeel, priest-in-charge at St. John’s Episcopal Church in Thibodaux, reported that some of the shutters had blown off, and glass panes broken.

Anticipating ongoing power outages, St. Philip’s Episcopal Church in New Orleans was planning a function where everyone could cook any perishable food before it spoiled.

Diocese of Louisiana Bishop Morris Thompson, along with 60,000 others, evacuated New Orleans before Isaac made landfall. He thanked his clergy “for paying attention to your folks. It is nice to be connected; thanks for your work.”

Thompson hopes to return to New Orleans on Sunday. The diocesan offices in New Orleans will be closed until Tuesday.

The Diocese of Louisiana has published an Isaac webpage that will be updated as new information becomes available.

In the coming days, Episcopal Relief & Development will be standing ready to assist as diocesan teams are able to assess the situation.

Episcopal Relief & Development has longstanding partnerships with the dioceses of Louisiana, Mississippi and the Central Gulf Coast that began with Hurricane Katrina recovery efforts in 2005. “For the past two years, all three dioceses have received disaster preparedness training and have continued to hone and exercise response strategies, including communications plans,” the agency said in a recent release. “Because of this preparation, the dioceses are positioned to effectively assess and respond to needs when weather conditions allow.”

Meanwhile, the Episcopal Church’s National Altar Guild Association has prepared portable eucharistic kits to send to those who need them in the storm-impacted areas.

The ninth named storm of the 2012 Atlantic hurricane season, Isaac developed on Aug. 21 in the Lesser Antilles. It first touched down as a tropical storm in Haiti and the Dominican Republic, where it is responsible for at least 24 deaths. The storm then skimmed Southeast Florida and the Florida Keys before heading towards the Gulf Coast.

In the Dominican Republic, more than 30,000 people have fled their homes due to flooding, and are now in need of basic supplies such as food, water and bedding, according to a plea from Bishop Julio Holguin.

“Members of our congregations and students at our schools are collecting food and clothing to donate to those most affected by Isaac,” said Holguin. “May God bless all those who in one way or another are demonstrating their generosity towards these victims.”

In Haiti, where Isaac caused extensive flooding in a number of areas, the Episcopal diocese has provided pre-positioned supplies of clean drinking water to 500 families in Léogâne, and will distribute potable water in up to five additional areas, according to Episcopal Relief & Development, which will provide additional support for emergency needs or recovery as the diocese completes its assessment. The World Health Organization reported new outbreaks of cholera in the in the aftermath of the storm.

Donations for hurricane relief can be made via Episcopal Relief & Development’s website here.