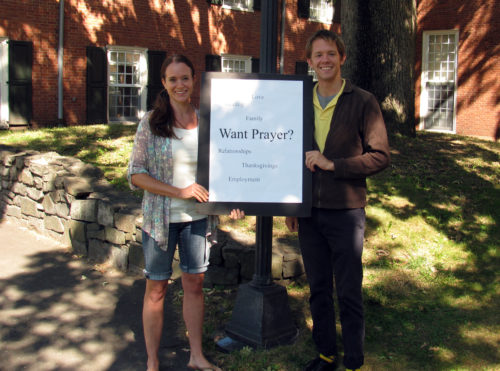 [Episcopal News Service] Progressive lay evangelist Adrian Dannhauser has been known to stand on a busy Stamford, Connecticut street at lunchtime with a sign: “Want Prayer?”

Sometimes she’d add a verbal invitation to those who approached. Others sometimes passed her by, slowed, turned around and returned.

“You’d hear about the loss of a loved one just the day before,” she recalled during a recent telephone interview. “Or, ‘my wife is having trouble getting pregnant.’

“It’s a beautiful form of evangelism,” she said, her voice breaking. “To bear witness to people’s souls is such a privilege. You’re looking to share an experience. You try to facilitate an encounter with God.

“Progressive evangelism is connecting my story, your story and the great story.”

The former Wall Street bankruptcy and restructuring attorney now attends Berkeley Divinity School at Yale and, along with her “partners in evangelism” Otis Gaddis III and Matthew Lukens, is among a growing number of progressive evangelists in the Episcopal Church who are taking church to the streets and the people.

“You’re not trying to change anyone’s mind or belief system,” said Dannhauser, 34. “I will pray with anyone of any faith in whatever mode they’re comfortable.”

Progressive evangelism, says Gaddis, now a transitional deacon and chaplain at the University of Maryland at College Park, means first and foremost, living out in a very visceral way, the baptismal promise “to seek and serve Christ in all persons and loving your neighbor as yourself.”

“It assumes that Christ is already present,” Gaddis said during a recent telephone interview. “The goal is not to bring people to church but to reveal the presence of church between you and the person you’re talking to.”

It can be as simple as striking up a conversation with the person beside him in line, or on an airplane, or in a café — something he has done many times.

“To be a progressive evangelist means that I am ready and able and desire to hear someone else’s spiritual story and their authentic being through that story and to reply with a story of my own that shows that I was really present.

“Most people don’t have people to talk about that with,” said Gaddis, 32, a former lawyer. He founded the Episcopal Evangelism Network (EEN) in 2009 while a Berkeley seminarian.

Initially, the organization grew out of the students’ own practice of getting together and creating a safe place to share their own personal experiences of God, their spiritual stories.

“We built a lot of pastoral care skills in a lot of ways, we started hearing each other in a way we didn’t anticipate. We became the community, we discovered that the issue is that we don’t talk to each other about stuff that really matters, including our spiritual matters,” he said.

By May 2010 the EEN had spread to the Church Divinity School of the Pacific in Berkeley, California. Presently there are chapters at the Seminary of the Southwest in Austin, Texas, at the General Theological Seminary in New York, and at Virginia Theological Seminary in Alexandria. Gaddis hopes EEN will have a presence at all the Episcopal seminaries and also to involve laity and clergy in creating new Episcopal spiritual communities.

The EEN is convening a missional development conference Sept. 20-22 at the General Theological Seminary, aiming to equip leaders in the church to develop spiritual communities, and to witness to and share the image of God in one another, engage people and communities across lines of difference, and form missional leaders who can nurture others’ pursuit of their authentic vocation, Gaddis said.

The conference is sponsored by: the Berkeley Divinity School at Yale; Episcopal Young Adult and Campus Ministries; and the dioceses of Connecticut, Long Island, Maryland, Newark, Washington and Virginia.

Progressive evangelism is part of Matthew Lukens authentic vocation; he spent much of the summer giving away lemonade and engaging passersby in conversation on the steps of the Cathedral of St. Paul in Boston.

He served as an intern with The Crossing, an emergent worship community of St. Paul’s.

“The goal was to try and create a moment where people could stop and have this different thing encounter them in their day, to simply have a conversation with someone and give them something, usually lemonade. Also water. We wanted to know who they were, how they were doing and how far we could get into that conversation with them.”

Lukens, 25, was raised Southern Baptist in Alabama and is well aware of the connotations the word “evangelist” can evoke. “In some traditions it is the job of the evangelist to transform you into being my way. But in progressive evangelism, I need to have an openness to being transformed because other people are bringing God’s light to the conversation in the way they’ve experienced it.”

He recalled, laughing, that after his first “want prayer” street experience with Gaddis and Dannhauser, he realized that “it took the Episcopal Church to get this former Southern Baptist out on a street corner praying for people.”

Progressive evangelism is not, however, about converting or getting people to church, he said.

“To me, progressive evangelism is primarily a posture toward encountering other people. I think of it as a spiritual practice. The opportunity to go deeply into conversation with other people, to hear their passions, where do they hear God speaking to them, whether or not they become an Episcopalian. Those conversations get at precious places in our lives that I find people don’t have an opportunity to share.”

Mostly, it is about forming spiritual community. “It’s something people are also hungry for,” he added. “One hears about the large number of people that don’t identify with any religion or say they’re spiritual but not religious, but the thing that’s always missing in those places is a community to have that conversation.”

Gaddis agreed. “Your listening ears become the soil for the word that is already there,” he said of the spiritual conversations. “And it’s fun, because you’re watching people literally become alive in front of your face, and that’s what church can be.”

Bishop Eugene Sutton has commissioned a lay evangelist in the Diocese of Maryland, Buddy Coffey.

He had been in the discernment process but had concluded that, “ordained ministry was not for me,” said Coffey, 62, a former engineer.

But Sutton recognized Coffey’s “extraordinary gifts in introducing the gospel to people,” and commissioned him to serve as a lay evangelist, teaching, preaching and writing about evangelism, as well as engaging others in spiritual conversation and how to communicate their faith to others.

“I’d like to commission more lay evangelists,” Sutton said during a recent telephone interview. “For one thing, it helps the whole church, it helps individuals, because a number of these individuals are seeking a way for the church to recognize their gifts and even support them in some way, even if not financially. It could ease the pressure we have on the ordination process.”

Coffey describes his vocation as being a lively witness who proclaims by word and example the good news of God in Christ. “People always ask, ‘what’s this about?’ It lets me begin a conversation that may or may not lead to a spiritual conversion.”

In Southern California, Randy Kimmler “unintentionally” helped plant the Community of the Holy Spirit in the Silver Lake district of the Diocese of Los Angeles about six years ago. Mostly, he just listened to the Holy Spirit, he said.

“It’s not a church. It’s not a mission. It’s an anomaly and dioceses around the country are trying to figure out what to do with groups like us that are springing up all over the place,” he said during a recent telephone interview.

The Community of the Holy Spirit (CHS) “started off as a Lenten study group for about six or seven lay people,” he recalled.

It was so much fun that they wanted to continue after Lent. And they wanted to add Eucharist. A local priest celebrated and “then we said, ‘why don’t we keep doing this?’” Kimmler recalled.

Lay-organized and led, the group is considered an emergent progressive Christian community, he said during an August 28 telephone interview.

CHS continues to meet regularly on Thursday evenings in a space above a local restaurant. “We call it the Lord’s Supper in three courses. The first thing we do is offer them bread and wine.”

The first course is a gathering time, with beverages and hors d’oeuvres, fellowship and conversation. Newcomers are greeted and introduced to the group by those with whom they’ve been speaking.

The second course includes hearing the word, a five-minute response or reflection to it, followed by time for sharing by group members. A priest — from an established rota of about 20 — celebrates the Eucharist.

The final course “is dessert. We clear the altar and set it up with dessert and people can stay and talk as long as they want,” Kimmler said.

The group’s evangelism is also unique — by sharing their space for monthly art exhibits featuring the work of local musicians, writers, sculptors and painters, he said.

Kimmler will be presenting a workshop at the EEN about church planting by the laity.