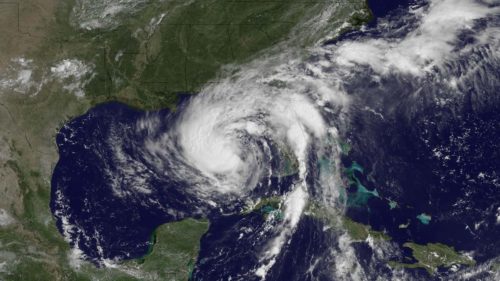 [Episcopal News Service] Episcopal dioceses along the U.S. Gulf Coast were initiating disaster preparedness plans Aug. 27 as Tropical Storm Isaac emerged into the Gulf of Mexico’s warm waters after drenching Haiti and the Dominican Republic and skimming Southeast Florida and the Florida Keys over the weekend.

The U.S. National Weather Service has issued hurricane warnings for the Gulf Coast from Morgan City, Louisiana, to Destin in the Florida Panhandle, including the city of New Orleans, Lake Pontchartrain and Lake Maurepas.

The National Hurricane Center said it expected the tropical storm to gain strength, possibly becoming a category two hurricane, before it makes landfall sometime late Tuesday or early Wednesday morning, Aug. 29, the seventh anniversary of the devastating Hurricane Katrina. The four coastal Episcopal dioceses that could be affected are Louisiana, Mississippi, Central Gulf Coast and Florida.

In Haiti, Episcopalians were mobilizing efforts to respond to those most in need after Isaac bore down on the island of Hispaniola Aug. 24, claiming at least 12 lives and temporarily displacing at least 40,000 people.

Despite the losses, Diocese of Haiti Bishop Suffragan Oge Beauvoir, who is based in Cap Haitien in the northern region of the diocese, wrote in an e-mail Aug. 27 that Haiti appeared to have been “spared” from the worst of Isaac. “God has heard your prayers … There is not too much damage, so far … We thank God for that.”

“We got some heavy rains and bad winds. But by the grace of God, we are safe,” Beauvoir told ENS. “I have been in permanent contact with the clergy, and lay pastors of the Northern Region where I am working, and all the reports look good, all things considered.”

Ahead of the storm, diocesan clergy had been asked to make provisions for themselves and, where possible, their parishioners. Clergy were reminded to urge parishioners who live near the coast or near rivers to move inland and stay with friends, and to try their best to stockpile basic necessities such as water.

The Miami-based offices of the Episcopal Diocese of Southeast Florida were closed Aug. 27 as a precautionary measure because the outer bands of the storm were still producing heavy rain and squalls in the area.

Mary Cox, director of communications for the Southeast Florida diocese, which also includes the Florida Keys, said she was not aware of any significant problems in the region. “Our major concern, of course, is for our companion dioceses of Haiti and the Dominican Republic. As soon as we hear from them about specific needs, I’m sure we’ll be organizing assistance. And like everybody else, we’re praying for our neighbors on the Gulf Coast,” she wrote in an e-mail to ENS.

Cox said the diocese had heard from partners in the Dominican Republic to say that they are all OK but that they were cleaning up after “lots and lots of rain.”

The National Hurricane Center, in an advisory at 1 p.m. EDT, warned of dangerous surf and rip currents that would continue to affect the Florida Peninsula and the Florida Keys during the next day or so, and would begin to affect portions of the Gulf Coast later today. Isolated tornadoes also are possible from Central Florida through the northeastern Gulf Coast today and tonight, the advisory noted. Maximum sustained winds are currently recorded at 65 mph with tropical-storm-force winds extending up to 240 miles from the center. Storm surges are expected to reach 12 feet along some coastal areas.

The ninth named storm of the 2012 Atlantic hurricane season, Isaac developed on Aug. 21 in the Lesser Antilles.

As Isaac continues on its path towards the Gulf Coast, Bishop of Louisiana Morris K. Thompson Jr. wrote to diocesan leaders Aug. 27, saying that while the forecast likely “brings with it more than just the normal anxiety associated with hurricanes, as it comes on the anniversary of Hurricane Katrina, in times like this it is important that we keep strong in our faith and know that God is still God. So, as people are fond of saying, we prepare for the worst and pray for the best.”

Thompson underscored the importance of taking precautions now “to protect ourselves and those in our care. We should know where our family members, our close friends and (for those in church leadership positions) our parishioners are going to be over the coming days, and they should know our plans.”

Conference calls have been scheduled for diocesan clergy to assess the needs immediately after the storm has passed. Meanwhile, a special webpage on the diocesan website  has been created where useful and important information may be posted in the coming days.

In Mississippi, the Rev. Carol Borne Spencer, diocesan coordinator for disaster preparedness and response, is not taking any chances.

Spencer told clergy in an Aug. 27 e-mail that the diocesan disaster and preparedness task force is available to offer assistance as needed and reminded them to refer to a booklet on personal and congregational preparedness for disasters provided to each Mississippi congregation.

“I know this is ‘old news’ to some of you who have been through this drill before,” said Spencer, but “I would rather err on the side of caution. I pray that each of you on the coast err on this side of over-preparedness as well.”

Spencer, coordinator for outreach and mission at St. Andrew’s Episcopal Cathedral in Jackson, also asked the clergy to keep Mississippi Bishop Duncan Gray III “informed of your status, personal and congregational, after the storm passes … Please don’t forget to check on your most vulnerable members who may not have others to help them prepare … I am praying for everyone’s safety.”

The Rev. Scott Lenoir, editor of The Mississippi Episcopalian and assisting priest at St. John’s Episcopal Church in Ocean Springs, told ENS that he will be in “full prep mode like everyone else” in the diocese. He said that his church would stay open Tuesday night and Wednesday morning, when the storm is expected to make landfall, as several parishioners live in flood-prone areas and his church sits at a higher elevation.

Lenoir, who serves as co-chair of the diocesan disaster and preparedness task force, said that during the last 12 months the team has compiled a detailed database that can be used as a resource for relief efforts in the event of a crisis. The team also has met with every convocation (groups of parishes) in the diocese in an effort to educate, prepare and gather resource information.

Although the Diocese of Alabama, which is located further inland and runs from Montgomery north to the Tennessee border, will likely avoid the brunt of the storm, it is standing ready to provide assistance to the coastal dioceses should that become necessary, Communications Coordinator Dave Drachlis told ENS.

Episcopal Relief & Development continues to be in regular contact with partners in the affected dioceses and is standing by to offer support and assistance.