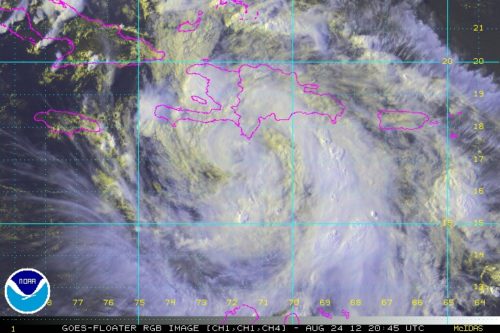 Tropical Storm Isaac is due to make landfall in Haiti, possibly as a hurricane, some time overnight Aug. 24-25. This satellite photo, taken at 4:45 EDT, shows Isaac spreading over Haiti and the Dominican Republic. Photo/Nation Oceanic and Atmospheric Administration

[Episcopal News Service] As Tropical Storm Isaac bore down on the island of Hispaniola Aug. 24, residents of Haiti and the Dominican Republic were warned to take shelter as best they could.

Diocese of Haiti Bishop Suffragan Oge Beauvoir told Episcopal News Service at midday that he had been in touch with clergy in the northern part of the diocese (which he supervises) telling them to make provisions for themselves and, where possible, their parishioners.

“It’s going to be very fierce,” he told ENS via telephone en route to his Cap-Haitien office in the Greater North Region of Haiti.

Beauvoir said he told the clergy to urge parishioners who lived near the coast or near rivers to move inland and stay with friends. He also reminded them to try their best to stockpile basic necessitates such as water.

The U.S. National Hurricane Center reported at 5:00 p.m. EDT that Isaac was 100 miles south-southeast of Port-au-Prince, the capital of Haiti. The storm was moving toward the northwest at 16 miles per hour.

Tropical storm-force winds extend outward nearly 185 miles from Isaac’s center, the hurricane center said. Thus, portions of both Haiti and the Dominican Republic, the two nations on Hispaniola, could experience tropical storm conditions for the rest of the day and into the night. Maximum sustained winds of 65 miles per hour had been recorded, according to the advisory.

A hurricane watch had been posted for Haiti and the advisory said Isaac could be near hurricane strength by the time it makes landfall in Haiti overnight.

The storm is expected to bring with it eight to 12 inches of rain with some parts of Hispaniola receiving up to 20 inches. “These rains could cause life-threatening flash floods and mudslides,” the hurricane center warned.

Beauvoir said the main worry for Haiti in the face of Isaac is the nearly 400,000 people in the Port-au-Prince area who still live in tents more than two and half years after the January 2010 earthquake. “It’s very scary and it’s very serious,” Beauvoir said of the situation in and around the capital.

“Residents of Haiti are deeply concerned about the people living in tents, who are at great risk from rain, wind and mudslides,” the Rev. Joseph M. Constant, the Episcopal Church’s special coordinator for Haiti, told ENS via email. “Haitians are hoping that the local authorities will intervene in the lives of these people and provide them with shelter. Unfortunately, there are not enough large institutions (schools, community centers) that are structurally sound and can provide shelter to those at risk. On behalf of the people of Haiti, Dominican Republic and others who may be affected by Isaac, we ask for continued prayers.”

Some observers expressed concern that the storm could bring an increase in cholera infections. The country has been fighting a cholera epidemic since the fall of 2010, although the infection rate has slowed recently, according to a United Nations report. Close to 582,000 cholera cases have been recorded since October 2010 and there have been nearly 7,500 reported deaths. In late July, the UN Office for the Coordination of Humanitarian Affairs warned that Haiti’s “national capacity to respond to potential outbreaks, especially during the rainy season, remains very weak.”

According to the Associated Press, the Haiti government and international aid groups announced plans to evacuate several thousand people from one of the settlement camps that sprang up in the aftermath of the 2010 earthquake. Dominican Republic authorities began to evacuate people in low-lying areas but were reportedly encountering resistance from people who feared their homes would be burglarized.

In Haiti, government officials said they had set aside $50,000 in emergency funds and that 118,000 bottles of water and 100,000 hygiene kits were available. Some 1,500 temporary shelters had already been identified while buses and 32 boats were on stand-by for use in evacuations, according to the Haiti Libre news website and the Associated Press.

The AP reported that the government’s announcements and warnings were met with shrugs by some. “We don’t have houses that can bear a hurricane,” Jeanette Lauredan, who lives in a tent camp in the crowded Delmas district of Port-au-Prince, told an AP reporter.

Beauvoir told ENS that Haitians need to take a longer view, despite their disaster-plagued past. Warnings are issued but not everyone heeds them and “when the disaster is passed, we sit back and wait” for the next one.

“If we continue to live like that, the Kingdom of God will never come to Haiti,” he said.

Instead, he urged a long-term and systemic approach of on-going education that can lead to empowerment, especially economic empowerment. Whether those changes will come about in five, ten or 15 years is not certain, Beauvoir said, “but we have to start somewhere.”

And, he said, “at least as the church we must plant the seed.”