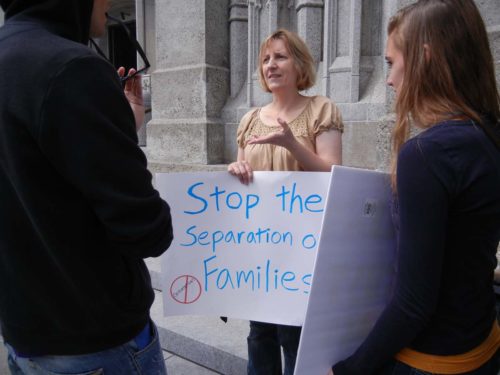 Sarah Lawton, vice chair of the Standing Commission on Social Justice and Public Policy, and a member of St. John the Evangelist in San Francisco’s Mission District, during a press conference Aug. 15 at Grace Cathedral. Photo/Francesca Pera

[Episcopal News Service] Clergy, community members and young immigrants gathered at Grace Cathedral in San Francisco on Aug. 15 to celebrate a nationwide temporary reprieve from deportation for young, undocumented immigrants. But while applauding the limited measure that provides a legal pathway to work for young people brought to the United States as children, the crowd urged California Governor Jerry Brown to sign the TRUST Act to extend some protection to family and community members.

Diego and Jose Hernandez, 18-year-old twins and high school seniors who came to the United States with their parents from Mexico when they were 7, for example, spoke at the press conference at the cathedral. They are eligible for the two-year temporary reprieve, but their parents are not.

The twins were among thousands of young immigrants who stood line Aug. 15 to take advantage of President Barack Obama’s “deferred-action plan,” a program by which “… eligible individuals who do not present a risk to national security or public safety will be able to request temporary relief from deportation proceedings and apply for work authorization.”

The Rev. Richard Smith, priest associate at St. John the Evangelist Episcopal Church, delivered prepared remarks on behalf of California Bishop Marc Andrus to the more than 50 people, including major media, present at the cathedral.

“This has not been an easy road for you, coming forward time and again to speak the truth and tell your stories. Sometimes it has been risky, but you have been brave, and you did it. We are so proud of you, and we are proud to continue standing with you until together we have achieved justice for all of your families as well,” said Smith. He is a clergy leader with the San Francisco Organizing Project, a grassroots community network representing more than 40,000 families.

“A word about the TRUST Act that is about to arrive on Governor Brown’s desk: We know that the overwhelming majority of immigrants in our churches and communities are law-abiding people working hard to support their families,” he continued. “They make enormous contributions to our economy, our society, our culture and, yes, our own lives of faith.”

“And that is why this diocese and our bishop today call upon Governor Brown to sign the TRUST Act when it arrives on his desk,” Smith concluded.

D059 calls for a halt to the Immigration and Customs Enforcement’s Secure Communities Program, which was intended as a way for federal officials to deport undocumented immigrants with criminal records.

“[Instead] we are deporting anyone in violation of immigration laws, not just criminals,” said Smith in an earlier interview with ENS. He knows of cases where an undocumented immigrant was pulled over for a broken tail light, taken into custody and, despite the absence of a criminal record, deported, he said.

California’s TRUST Act is meant to re-establish trust between local law enforcement in immigrant communities – trust that has been eroded by Secure Communities, according to the fact sheet.

ICE’s Secure Communities program, according to the resolution DO59’s text, “…leads to lengthy detention at the public expense of unrepresented immigrants who have no serious charges pending against them, and effectively discourages victims of various crimes, such as domestic violence, from reporting those crimes.”

“They say that it is to protect communities,” said the Rev. Paula Jackson, rector of the Church of Our Savior in Cincinnati, Ohio, and the resolution’s proposer. “It tears apart communities.”

Jackson recently baptized the three children of an unmarried couple (turned away by the Roman Catholic Church), a normally happy occasion overshadowed by the father’s deportation back to Guatemala.

“What should have been a celebration was fraught with grief,” she said while speaking to Resolution D059 at General Convention.

In the first half of 2011, more than 46,000 parents were deported, leaving their U.S. citizen children behind. Of those left behind, it is estimated that more than 5,000 children were placed in foster care – often without the consultation of parents, and when they could have been placed with family or close family friends – according to an Aug. 1 Episcopal Public Policy Network Action Alert quoting federal data obtained by racial justice think tank, the Applied Research Center, through a Freedom of Information request.

In the 22 years that Jackson has served Our Savior, the parish has become something of a safe haven for immigrants. During a post-convention telephone interview, Jackson described the population Our Savior serves and explained that she once accompanied an illiterate, indigenous woman who along with her three children lost an appeal for asylum back to Guatemala, navigating the journey through big city airports, the U.S. Embassy and back to her remote village.

“The immigrants that come to our church are a select group – much more recent immigrants –and the ones who come to Church of Our Savior tend to be the indigenous people whose second language is Spanish, their first language is an indigenous language, Mam, a Mayan language, and most were second class citizens where they came from,” said Jackson. “They have come from not just poverty; poverty is sort of like, take that for granted, though some are highly educated and can’t make living. They are fleeing brutal oppression and violence.”

Disparity in immigration law also adversely affects same-gender couples, especially where one partner is foreign born. That led Sarah Lawton, a deputy from California and vice chair of the Standing Commission on Social Justice and Public Policy, to propose D011.

Her husband is an immigrant, a naturalized citizen. But if he weren’t a citizen, she could sponsor him – an option same-gender couples don’t have, said Lawton. The resolution encourages legislation to allow same-gender couples the same rights as opposite-gender couples when it comes to a U.S. citizen’s or lawful permanent resident’s ability to sponsor his or her partner in the immigration process.

Lawton explained in a telephone interview with ENS that her parish, St. John the Evangelist in San Francisco’s Mission District, where Smith serves, has lost members, many to Canada, which allows same-gender sponsorship.

The Episcopal Church historically has supported comprehensive immigration reform; the resolutions passed at the 77th General Convention strengthen that position.

“The resolutions passed at General Convention give my work in Washington both its focus and its legitimacy,” said Katie Conway, the Episcopal Church’s immigration and refugee policy analyst. “It is very compelling for administration staff or members of Congress to see how an immigration resolution proposed by a diocese in Ohio, in one district, can then aid advocacy across the country in California or New Jersey or Arizona, in other dioceses and other districts.”

“These resolutions offer an opportunity to educate lawmakers about these issues through the work and passion of Episcopalians and ensure that the Episcopal voice remains strong and clear as we continue to push for humane and just immigration policies.”

Locally, Lawton said, having resolutions such as D059 helps rally support for such initiatives as the TRUST Act.

General Convention passed a third immigration-related resolution, D067, expressing “support the passing of federal legislation that presents a pathway to citizenship for undocumented youth and young adults” and encouraging scholarships for DREAMers, or young undocumented youth.

The DREAM Act, bipartisan legislation that would provide a pathway to citizenship for people who arrived in the United States as minors, is stalled in Congress. On June 15, President Barack Obama, who has encouraged its passage and said he would sign it, announced the deferred-action plan.

In the past, the federal government has granted amnesty to undocumented immigrants meeting certain criteria.

If not for the Immigration Reform and Control Act of 1986, Ariana Gonzalez-Bonillas of the Diocese of Arizona said she could not have attended General Convention as part of the Official Youth Presence in 2012.

“My father was not born here. He was born in Mexico City to a poor family, and they moved to California when he was 7, and he stayed there undocumented for the next 10 years,” she testified during a July 9 National and International Affairs Committee meeting. “He lived in the San Fernando Valley in Los Angeles, and he was surrounded by other undocumented people. In high school he considered going into the military, seeking residency and eventually citizenship, even though he was well on his way to become valedictorian. He could go to any school he wanted if only he was documented.”

The 1986 law allowed her father to attend the Massachusetts Institute of Technology. Two years later, he met Gonzalez-Bonillas’s mother, who was studying at nearby Wellesley College.

“They were married by an Episcopal priest when she graduated,” she said. “Two years after that, he became a U.S. citizen one week before I was born. When I was 6 months old, I was baptized into the Episcopal Church. I could say it was because of the amnesty that allowed my father to go to college that I stand before you today, and it is why I want to help other undocumented youth to go to college, to have an amazing education, to eventually gain citizenship along with a better life and to know that we support them wholeheartedly.”