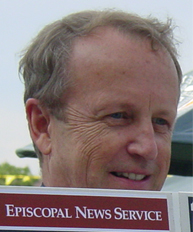 James E. Solheim – the Episcopal Church’s news director in an era bookended by the election of Anglicanism’s first female bishop and the ordination of its first openly gay bishop – died August 8 after several weeks’ hospitalization. A resident of Trenton, New Jersey, Solheim was 73 and suffered respiratory failure, said his nephew, Kurt Kaisler.

Of his career, Solheim said he “followed an ecumenical path, working first for the Lutherans, then the Presbyterians and the United Church of Christ.” Later, “when the Lutherans went off to Chicago to form a new church in 1988, I accepted the position as director of communications in the Episcopal Diocese of Massachusetts,” he recalled in November 2003, shortly before his retirement.

“Of course I had no idea that, a few weeks after I moved to Boston, the diocese would elect Barbara Harris as the Anglican Communion’s first female bishop. The next year was a blur but it provided a dramatic introduction to the Episcopal Church.”

Solheim deftly fielded the unprecedented media response to Harris’s election and ordination as bishop, the late Sonia Francis, the Episcopal Church’s executive for communication, said at the time. “He became a familiar figure to many… and played a major role in disseminating and interpreting the news generated by this international event.”

Francis joined Presiding Bishop Edmond L. Browning in announcing Solheim’s appointment on April 27, 1989 as the Episcopal Church’s director of news and information. He began work in June of that year, succeeding the Rev. William Dearnaley, and soon rebranded the former Diocesan Press Service as the Episcopal News Service, assisted by then-deputy Jeffrey Penn.

“I have such admiration for Jim’s professional skills as well as his friendship,” Browning said after learning of Solheim’s death.  “He was someone always willing to be helpful to colleagues on the staff.  He certainly was that to me.”

Solheim served “as the principal church spokesperson and acting as a key figure in the dissemination of news to the secular and religious media — and to the communication network of the Episcopal Church,” the news service reported at the time of his appointment.

Solheim supervised media relations surrounding Bishop of New Hampshire Gene Robinson’s 2003 election, confirmed by the General Convention meeting later that year in Minneapolis. By this time, Solheim’s byline had appeared on hundreds of ENS articles, many with companion photo credits, dozens of which won leading awards in national competitions. His 1999 book Diversity or Disunity: Reflections on Lambeth 1998 captured the tone and highlights of that summer’s Lambeth Conference.

“Jim was a consummate professional, a journalist who was widely trusted across the church to interpret the events of the Episcopal Church in a fair and comprehensive way,” said the Rev. Canon Brian Grieves, whose tenure as the Episcopal Church’s director of peace and justice ministries closely paralleled Solheim’s own.

“He made the Episcopal News Service ‘the’ source to go to for accurate information,” said Grieves. “He was also a great colleague, and I was so fortunate to travel with him on several occasions when we accompanied the presiding bishop on overseas jaunts.

“I especially remember his coverage of the Palestinian-Israeli conflict,” Grieves said. “He helped the church understand the injustice of the occupation through his spot-on reporting.

“His byline on a trove of stories is his legacy that will be mined for decades to come, along with the incredible photos he took that also told their own stories,” Grieves added. “Most of all I’ll miss his wit, his straight forward honesty, and his engaging insights into all manner of subjects. He was a great raconteur.”

Barbara Braver, whom Solheim succeeded as communication director in the Diocese of Massachusetts, recalled first meeting him through the Associated Church Press, an organization that he served as a volunteer and past president.

“Jim insisted on the importance of quotes in his reporting, which not only made for good reading, but also brought the newsmakers to life — and made them accountable for their own words,” said Braver, who retired in 2006 after 18 years as communication assistant in the Presiding Bishop’s Office, serving both Browning and his successor, Frank T. Griswold III.

“Jim had opinions, most assuredly, but was never a partisan, holding himself to a high standard of fairness, clarity and impartiality,” she added. “His work was greatly respected by his colleagues in a broad ecumenical network of journalists worldwide, who valued as well his good humor and his friendship.”

Griswold recalled how Solheim, “in the midst of highly charged and emotional issues, always managed to remain focused and objective in his reporting. These were important gifts to the church, and signs of his own integrity both as a person and a communicator. He was also immensely wise and able to take a long view of things and, when appropriate, able to view ecclesial goings-on with a sense of humor. Jim was a valued friend and colleague: may he rest in peace and rise in glory.”

Jerry Hames, editor of the church’s official newspaper Episcopal Life, formerly The Episcopalian, from 1990-2007, said that he “prized the opportunity to work alongside Jim” whom he described as “a professional in every way, dealing skillfully with the secular media, responding quickly to and interpreting accurately — often under difficult circumstances — the many complex issues that confronted the church over the years he served as its news director.”

Solheim was “highly regarded, not only by communicators within the Episcopal Church, but also by his colleagues in ecumenical circles and the secular media,” said Hames. “He was often the first point of contact for religion writers of such publications as Time magazine and the New York Times when they needed background or an official comment for an article.

“I know I speak for many others whose publications also benefited from his direction and leadership of the news service, his personal support for our work and the integrity by which he carried out his responsibilities.”

President of the House of Deputies Gay Jennings said that Solheim “was a great journalist and an even better human being. He will be deeply missed by many in the Episcopal Church and beyond. May he go from strength to strength in the life of perfect service.”

Bonnie Anderson, former House of Deputies president, said: “Jim contributed his many skills and gifts to the work of God’s church and was a strong, creative and professional advocate for journalistic excellence and truth-telling. He could always be counted on to brief Executive Council accurately and report with the same sense of clarity and fairness.”

In Massachusetts, Solheim served as editor of the diocesan paper, Episcopal Times, in addition to his work as communication director under the administration of then-Bishop David E. Johnson.

Solheim brought to this diocesan work wide experience in religious journalism. He was the founding editor and designer of Event, a monthly magazine dealing with social issues (1968-74); associate editor of A.D. Magazine (1977-83); editor of World Encounter (1984-88), and associate director of interpretation for the world mission office of the Lutheran Church in America. He was, starting in 1983, editor of Grapevine, the monthly newsletter of the Joint Strategy and Action Committee (JSAC), a coalition of the national mission agencies of 14 Protestant churches.

Born May 16, 1939 in Thief River Falls, Minnesota, Solheim was a graduate of St. Olaf College in Northfield, and held graduate degrees from Luther Seminary in St. Paul, Minnesota, and Columbia University in New York.

Memorial services in New Jersey and Minnesota will be private. A remembrance will be offered by the Episcopal Communicators at its 2013 conference in San Diego.

— Robert Williams is canon for community relations in the Diocese of Los Angeles. In 2004 he succeeded Solheim as director of the Episcopal News Service.