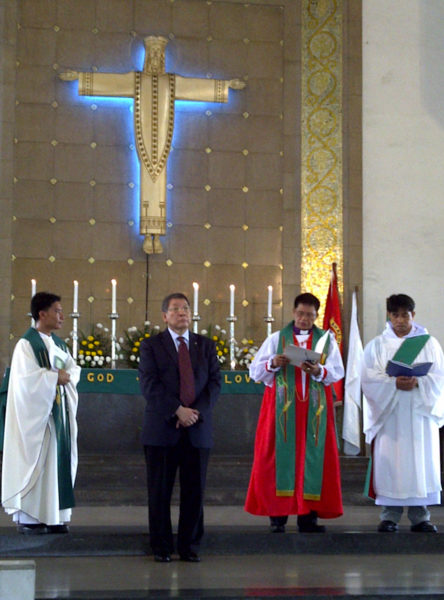 The appointment was formally conferred by the Most Rev. Edward P. Malecdan, prime bishop of the Episcopal Church in the Philippines (ECP), during Holy Eucharist on Aug. 5 at the cathedral.

Introducing Ng to the cathedral congregation, Malecdan described Ng as a very close friend to the ECP, acknowledging “his huge task” in taking care of “cooperation and companionship between TEC and other Anglican/Episcopal churches in our region.

“According to Anglican and Roman Catholic tradition, the ceremonial position of an honorary lay canon ‘is conferred or given to a person who performs distinguished services such as establishing and strengthening relationships and partnerships between governments or churches, and between groups and individuals,'” Malecdan said. “In short, the person is an ambassador of friendship and reconciliation, to say the least. Peter Ng has been more than that to us in the ECP.”

Malecdan said that Ng has “played a major role in solidifying and cementing the relationship of our two churches. It is in recognition of this long, dedicated and continuing service to the ECP that the title of honorary lay canon of this national cathedral is conferred upon Peter Ng. He more than deserves to be our canon.”

Ng becomes the second U.S. citizen to be appointed as honorary canon of the ECP National Cathedral. In 2005, then Prime Bishop Ignacio C. Soliba appointed the Rev. Mark Harris as honorary canon. Harris was then a long-time member of the Joint Committee on the Philippine Covenant, an agreement between ECP and the U.S.-based Episcopal Church, which primarily monitored the work towards the financial autonomy of the Philippine church.

The two churches have since shared a global covenant, which was last renewed in 2007. Through the covenant the churches rejoice in their common history and heritage and share a common commitment to full partnership in mission.

— Floyd Lalwet is national development officer for the Episcopal Church of the Philippines.