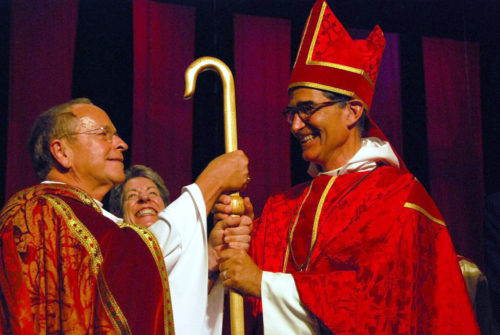 Diocese of New Hampshire Bishop Gene Robinson, left, presents newly ordained Bishop Coadjutor Robert Hirschfeld with a crosier made from the remains of an ash tree that lived on the grounds of the White Mountain School. The two playfully go hand over hand on the staff, the way opposing sides in an impromptu baseball game determine who bats first, while Presiding Bishop Katharine Jefferts Schori reacts in the background. Photo/Richard Schori

[Episcopal News Service] In a liturgy marked by both solemnity and good humor, the Rev. A. Robert Hirschfeld was ordained and consecrated Aug. 4 as bishop coadjutor of the Diocese of New Hampshire.

Hirschfeld, 51, the former rector of Grace Episcopal Church in Amherst, Massachusetts (Diocese of Western Massachusetts), will work with diocesan Bishop Gene Robinson until the latter retires and Hirschfeld is installed Jan. 5 as the 10th bishop of the diocese.

Hirschfeld was elected May 19 on the first ballot out of a field of three nominees.

“I’ve heard some people say that Rob is a safe choice for the next bishop of New Hampshire – after all, he’s white, he’s a man, and he’s straight,” the Rev. Margaret Bullitt-Jonas noted during her sermon, referring in part to the controversies that surrounded Robinson’s election in 2003.

“Well, I’ve known and worked with Rob for a good long while, and I have to say that he is not safe – no, really, he’s not,” said Bullitt-Jonas who worked with Hirschfeld as a priest associate in Amherst. “By which I mean that Rob’s fundamental intention is to liberate the love and creativity of the Holy Spirit. Rob is a person of prayer, and anyone who returns day after day to the holy mountain of prayer and lets God’s creative life pour into him or her is going to be less and less satisfied with the status quo, less and less willing to settle for doing things the same old way, the way we’ve always done them.”

The readings for the service were those for the Feast of the Transfiguration (celebrated Aug. 6) and Bullitt-Jonas carried the theme of the radiance and the transforming power of the Holy Spirit through her sermon.

“In becoming a bishop, Rob is committing himself to his own path to transfiguration, not just for his own sake and for the salvation of his soul, but also in service to the light that shines in you,” she told the estimated 1,100 people gather in the Capitol Center for the Arts in downtown Concord.

Prior to the solemnity of the consecration, the congregation broke into laughter as it began to chant Psalm 99 with a combined choir made up of singers from congregations in New Hampshire and Grace Amherst. As the first verse ended with the words “he is enthroned upon the cherubim; let the earth shake,” either an organ cipher or a glitch in the sound system caused a prolonged and very low tone to reverberate throughout the theater. As the altar party and congregation began to note the irony of the rumbling tone in response to their call of the earth the shake, they burst into laughter.

After the rumbling and the laughter subsided, the choir began the psalm again without interruption.

Prior to becoming rector of Grace Church, Hirschfeld was vice chaplain at St. Mark’s Chapel at the University of Connecticut in Storrs, and was assistant priest at Christ Church, New Haven. He spent a year as pastoral assistant at the Cathedral of the Holy Trinity in Paris, France. He served on diocesan council and as a regional dean in the Diocese of Western Massachusetts.

He is a 1983 graduate of Dartmouth College, where he received his B.A. in literature. In 1991, he completed a Master of Divinity degree at Berkeley Divinity School, Yale University in New Haven, after having spent time at the General Theological Seminary in New York. Born in Minnesota, he moved to Connecticut in childhood.

Hirschfeld is married to Polly Ingraham, a teacher at the North Central Charter Essential School in Fitchburg, Massachusetts, and writer. They are the parents of two sons, William and Henry, and a daughter, Cora. Hirschfeld enjoys painting and outdoor activities, including cycling, rowing, hiking, and skiing.