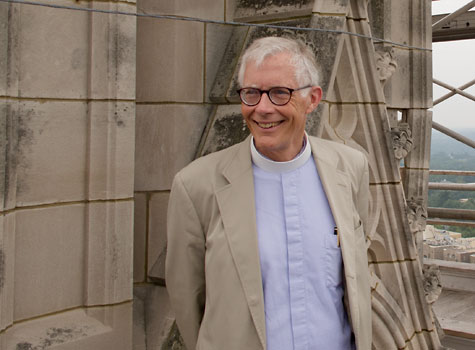 The cathedral chapter made the announcement on July 30 after a search committee recommended Hall from “a diverse pool of candidates from across the country in a process that spanned more than seven months,” a cathedral release said.

The Protestant Episcopal Cathedral Foundation Board of Trustees is expected to approve the nomination on August 17. A 20-day review is mandated by the foundation’s bylaws.

Hall, 62, is then expected to begin as dean on Oct. 1, succeeding the Rev. Samuel T. Lloyd III, who stepped down as the cathedral’s dean in September 2011 to return as priest-in-charge of Boston’s Trinity Church in Copley Square, where Lloyd had previously served as rector. The Rev. Dr. Francis H. Wade has served as the cathedral’s interim dean on a part-time basis since January. Hall’s installation service is expected to take place later in the fall.

Prior to his post in Michigan, Hall served as dean and president of Seabury-Western Theological Seminary in Evanston, Illinois, from 2005 to 2010. Before that he served as rector of the Church of the Redeemer in Bryn Mawr, Pennsylvania, from 2000 to 2005. And for 11 years prior, he served as the senior associate for education at All Saints Episcopal Church in Pasadena, California. He started his ordained ministry in 1976 as a deacon intern and bishop’s chaplain in Los Angeles.

In a letter to the cathedral community, Bishop Mariann Edgar Budde of Washington, David J. Kautter, chair of the cathedral chapter, and Canon Kathleen A. Cox, cathedral’s executive director, said they are “thrilled” by the nomination, noting that Hall “joins us at a pivotal moment in the life of the cathedral, and we are confident that the Holy Spirit has led the search process to this joyous conclusion.”

The letter said that Hall “possesses the spiritual and personal strengths to guide the cathedral toward the fulfillment of its great purpose” — in service to God’s reconciling mission in Christ.

In the letter, Hall called Washington National Cathedral “an architectural treasure and a living symbol of worship and ministry in the nation’s capital … I am eager to begin conversations with all the cathedral’s friends about how we can strengthen our historic ministries and imagine and enact new ones. I look forward to working with Bishop Budde, Cathedral staff and volunteers, the entire Cathedral Close, the Diocese of Washington, and with the extended community of supporters across the nation both to advance the cathedral’s interfaith and national mission and to expand its ministry in Washington.”

As dean, Hall will serve as the ecclesiastical leader of the cathedral and be its public voice, the letter noted. “He will preach regularly and lead the cathedral in convening people of all faiths and perspectives to examine and respond to important issues in the world. Gary will also lead the significant fundraising effort to restore and preserve the cathedral following $20 million of damage incurred from the August 2011 East Coast earthquake, in addition to responsibility for an annual operating budget of $12 million and approximately $30 million of pre-existing preservation needs.”

Gary has been married to his wife Kathy for 34 years. She has more than 30 years of experience as an elementary school librarian and teacher. They have one adult son.