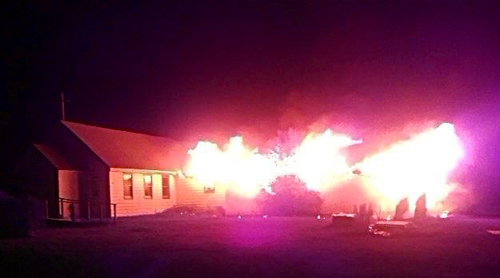 “At 10 p.m. Central Time a parishioner who lives across the road from St. James’ saw that there was smoke and fire coming from the church,” said the Rev. Canon John Floberg, who has served as St. James’ rector for 21 years and is canon missioner for native ministry in the Diocese of North Dakota. “Flames spread quickly through the parish hall to the church itself, and by quarter of eleven the whole structure was engulfed in flames. It’s all ash today.”

July 25 is a major feast day on the Episcopal Church calendar; it is the day it commemorates St. James the Apostle.

The cause of the fire is under investigation, said Floberg, adding that the church was a wooden structure and at least the second church built on that site.

“I feel like I lost a family member. Very sad,” the Rev. Terry Star, a deacon who serves the Standing Rock Episcopal Community and is a member of the Episcopal Church’s Executive Council, said on his Facebook wall early July 26.

Star grew up at St. James’ and has served the congregation in the past.

St. James’ congregation was established in 1890 in Cannon Ball, which is part of the Standing Rock Sioux Indian Reservation, and has been home to generations of Episcopalians, Floberg said.

Cannon Ball, in the south central part of the state, was the first place the Episcopal Church was established on the North Dakota reservation. Three other congregations trace their roots to St. James, according to the diocesan website. Services there include hymns in the Dakota language.

“It’s a family church,” Floberg said, adding that there are about 250 members in a community of 800 people where half the population is under the age of 20. “So last night and today we’ve been dealing with the grief that people have over losing the building that has always been the building that they have called their church.”

North Dakota Bishop Michael Smith will gather with the St. James community at noon on Sunday, July 29, for Holy Eucharist at the site of the destroyed church.

Meanwhile, St. Stephen’s Episcopal Church in Fargo, in eastern North Dakota, echoed the diocese’s call for prayers for St. James and announced that it would take up a collection for the congregation on July 29.

Sioux County, where Cannon Ball is located, is one of the poorest counties in North Dakota and among the top ten poorest in the nation, Floberg said. The county has a population of about 4,200 people spread over about 1,100 square miles, all of it reservation land. Just more than 47 percent of those people lived below the poverty line during the period from 2006 to 2010, according to the U.S. Census Bureau.

Floberg said that when the church was built, the bishop at the time wanted the congregation to build a stone structure that could withstand the harsh winds, but the people of St. James’ didn’t have the money.

“Our congregation serves in one of North Dakota’s toughest towns,” St. James says in its listing on the diocesan website. “Addiction to alcohol and unemployment are both very high. But we aren’t going to give up. The church has been with us for almost 115 years and is important to us and our community.”

— Lynette Wilson and the Rev. Mary Frances Schjonberg are editors/reporters for the Episcopal News Service.