The Rev. Hiram Kano leads worship at a church in Nebraska.

[Episcopal News Service] While imprisoned in four World War II internment camps in four years the Rev. Hiram Hisanori Kano led worship, ministered to and taught those around him, including his jailers, other internees, and German POWs.

The Nebraska priest’s life and ministry are the stuff of legend, so much so that the state legislature adopted a resolution recognizing his contributions and Gov. Dave Heineman has designated July 29 as “Father Hiram Hisanori Kano Day.”

Presiding Bishop Katharine Jefferts Schori will officiate at a 4 p.m. festival Eucharist in Kano’s honor July 29 at the Church of Our Savior in North Platte, Nebraska.

Recently, the 77th General Convention of the Episcopal Church in Indianapolis approved preliminary steps to include Kano in Holy Women, Holy Men, the church’s calendar of commemorations.

“He said, well, God put me here, what does he want me to do?” Kano recalled during a recent telephone interview from his home in Cape Cod, Massachusetts. “He saw in one of the camps that his fellow prisoners were many of the leaders of the Japanese community — many professors, doctors, lawyers, dentists and other professional people — and he organized a camp college and he invited all the people in the camp, including the guards, to attend these classes as they saw fit,” Kano said.

“My father also did nature studies and took groups of people out into the swamp in Louisiana and explained about the leaves on the cypress trees and the animals — the water moccasins, the alligators,” he added.

Adeline Kano, 84, agreed, adding that although their father “was interned, he was still a very busy man, trying to continue to do his work as a priest, as a human being, trying to help other people.

“These were all men incarcerated and it was difficult, you know, for them to keep focused on staying calm and cool and positive. So some of the things my father did while he was in these camps was … to teach the prisoners about nature. It could help keep their minds off the fact that they were incarcerated and away from their families.”

Kano also conducted worship services while incarcerated. “Even the Air Force, the prisoners would talk to him. There were some German prisoners there. He always tried to give everybody hope because that’s what our belief is in.”

Kano emigrated to the United States after a youthful encounter with William Jennings Bryan in his native Japan stirred his sense of adventure, according to his daughter, Adeline Kano.

“My grandfather was the governor of the prefecture of Kagoshina,” explained Kano, 84, during a recent telephone interview from her Fort Collins, Colorado home.

“When Papa came to the United States in 1916 he went to Bryan’s home,” she said.

Initially, Kano earned a master’s degree in agricultural economics at the University of Nebraska, and just as quickly became an activist and leader among the Japanese “Issei” or the first-generation community, many of whom had come to farm or to work on the railroads.

The Rt. Rev. George Allen Beecher, then bishop of the missionary Diocese of Western Nebraska, heard about Kano’s activism in 1921, when state lawmakers were considering legislation that would preclude Japanese immigrants from owning or inheriting land, or even leasing it for more than two years. Nor would they be allowed to own shares of stock in companies they had formed.

Kano and Beecher met and traveled together to the state capitol to address lawmakers, who eventually passed a less restrictive measure, according to Kano’s memoir, “Nikkei Farmer on the Nebraska Plains.” 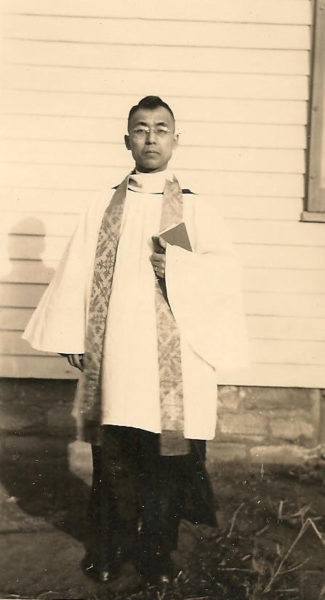 Beecher persuaded Kano several years later to become a missionary to the Japanese community, estimated at about 600. In 1925, Kano complied and the family moved to North Platte. He was ordained a deacon three years later and served two mission congregations, St. Mary’s Church in Mitchell and St. George’s Church in North Platte. He was ordained to the priesthood in 1936.

Rose Yamamoto, who translated Kano’s memoir from Japanese into English, said, “If Fr. Kano hadn’t been with us we wouldn’t be Episcopalians now. He led the Christian community in Mitchell and North Platte.”

Roy S. Yanagida was just a boy but he remembers Kano as “being very instrumental in providing leadership, especially education. He provided the leadership for my parents, along with a lot of others to receive citizenship to the United States.”

Like a lot of other immigrants, his father Toshiro Yanagida arrived in North Platte to work on the railroad, and later became a sharecropper. “North Platte was quite the city for Japanese immigrants,” he recalled.

The churches Kano pastored were “a gathering point for many of us,” Yanagida recalled. “We also had a Japanese school at the church where we studied the Japanese language.”

He also remembers the shock and sorrow that flooded the community after the Dec. 7 attack on Pearl Harbor. FBI agents arrested Fr. Kano later that day; he spent the next four years in various concentration camps.

“They took him immediately because he was the leader of the group,” Yanagida recalled. “The rest of us didn’t have to go to an interment camp because they told us we were inland enough — that if we had been on the west coast we would have had to go.”

Busy is the way Adeline Kano remembers her father. That he was always working, whether caring for others, or studying, or preparing sermons.

Even so, she didn’t realize the tremendous impact of his ministry upon the community, she said. “I just knew that he was busy, and that the went back and forth, wherever we lived, whether in the panhandle of Nebraska or in North Platte.”

Often, it was a team ministry, she added. “At that time we didn’t have babysitters,” she recalled. “We would all go to visit the families. We’d get in the car and go.”

A lot of it was accomplished with the support and assistance of her mother, Aiko Ivy Kano, she added.

She feels humbled about the upcoming celebration, which both she and her brother plan to attend.

“I knew he did a lot, but I just didn’t realize the magnitude of it,” she said. About the possibility of her father being added to the church calendar, she said: “It’s awesome. It is a humbling experience.”

The Rev. Winfred Vergara, Asiamerica missioner for the Episcopal Church, agreed. “Giving this honor would vindicate Fr. Kano and the thousands of Japanese Americans who were wrongfully herded and placed in the internment camps during World War II.

“Kano’s pastoral ministry among his fellow Japanese internees and pastoral care extended to Caucasian soldiers who were imprisoned for being AWOL and deserters, and earned him the sobriquet as ‘saint of Nebraska’ and a credible agent of the ministry of reconciliation,” said Vergara.

There will also be a celebration of the two mission congregations Kano led, St. Mary’s in Mitchell and St. George’s in North Platte. Eventually the two were folded into other congregations, like Church of Our Savior, said Steve Kay, a parishioner who organized the celebrations.

“He was an amazing man,” Kay said of Kano during a recent telephone interview.” He devoted his life to helping immigrants, he taught them. He was an agricultural advisor.

After he retired, Hiram and Aiko Kano moved to Fort Collins, Colorado, where Adeline Kano lives. He died in 1988, just shy of his 100th birthday; she passed away in 1997, two months before her 100th birthday.