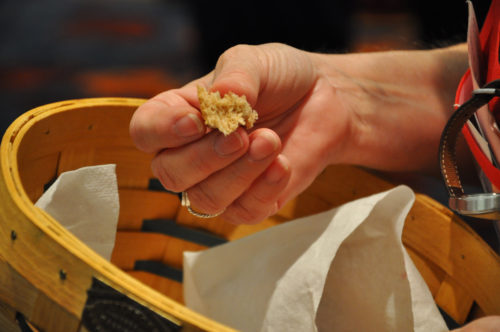 The 77th General Convention affirmed that it is “normative” for people to be baptized before receiving communion. ENS photo/Mary Frances Schjonberg

[Episcopal News Service] The seeming disconnect in some parts of the Episcopal Church between the theology and practice of admission to communion became newly apparent to the Rev. Canon Beth Wickenberg Ely on a recent Sunday morning.

Ely, canon for regional ministry in North Carolina, who was presiding at St. Martin’s Episcopal Church in Charlotte, had to consult her notes to remind herself exactly how to describe who was welcome to receive communion.

“I didn’t know whether they say ‘everybody come’ or ‘baptized Christians’,” she recalled during a July 23 interview with Episcopal News Service. “I go with what the church does, and it varies.”

For Ely, who chaired the diocesan deputation to the recently concluded 77th General Convention, that moment at St. Martin’s epitomizes why her diocese proposed (via Resolution C029) that the Episcopal Church spend the next three years studying its theology that underlies access to Holy Baptism and Holy Communion.

Convention rejected both that suggestion and one from the Diocese of Eastern Oregon (Resolution C040) that would have allowed the church’s congregations to “invite all, regardless of age, denomination, or baptism to the altar for Holy Communion” by eliminating Canon 1.17.7, which says “no unbaptized person shall be eligible to receive Holy Communion in this Church.”

Instead, the convention passed a substitute for C029 in which the Episcopal Church “reaffirm[ed] that baptism is the ancient and normative entry point to receiving Holy Communion and that our Lord Jesus Christ calls us to go into the world and baptize all peoples.”

The substitute resolution came out of the convention’s legislative committee on evangelism to which C029 and C040 were assigned.

“The committee worked very hard with the two original resolutions and it was very clear that even those who would be leaning more towards the open-table idea were not ready to change the canon at this time,” the Rev. Canon Dennis Blauser, the Northwestern Pennsylvania deputation chair who also chaired the deputies’ Evangelism Committee, recalled during a July 25 interview with ENS.

Blauser said the committee heard from nearly 50 people during its hearing on the two resolutions. Some witnesses voiced concern over East Oregon’s proposal to do away with the baptismal requirement while others gave personal or second-hand testimony of people “who had had this powerful call to go to communion — to receive communion — and [how that experience] brought them into a new relationship with Christ and with the church, and eventually being baptized into the body of Christ,” according to Blauser.

In the end, the committee members sensed from the witnesses and amongst themselves that “there was really no strong pull” to abolish the canon, but they wanted to acknowledge that unbaptized people were receiving communion in the Episcopal Church.

Thus, when the House of Deputies first considered the committee’s substitute resolution on July 9, it included a second sentence saying: “We also acknowledge that in various local contexts there is the exercise of pastoral sensitivity with those who are not yet baptized.”

That sentence remained in the version of the resolution the deputies passed, despite an attempt by the Rev. Canon Dr. Neal Michell, chair of the Dallas deputation, and others to remove it. He told the deputies that accepting the sentence would give clergy permission to violate the canons of the church.

The Very Rev. Canon James Newman of Los Angeles, who opposed removing the sentence, said those distributing communion do so amidst a tension between deciding what do when someone puts out his or her hands to receive the sacrament and knowing what Canon 1.17.7 says.

When the bishops took up C029 on the morning of the last day of convention, they eventually rejected the “pastoral sensitivity” sentence after first considering rejecting the entire resolution or referring it to their theology committee, which convention had done in 2003 (via Resolution A089) at the bishops’ behest.

Missouri Bishop Wayne Smith told the House of Bishops during its debate that the issue is “an ongoing concern” for the house’s theology committee and so “whether you tell us to or not we will keep addressing this matter.”

Bishop Duncan Gray III of Mississippi, chair of the bishops’ legislative committee on evangelism, said that the bishops and deputies’ committee chose to rewrite C029 (and eventually discharge C040) because the former “was a more appropriate vehicle for what the committee wanted to say.”

Northern Indiana Bishop Ed Little told his colleagues that “we don’t need to tell clergy in the parish to be pastorally sensitive, and this will be read as opening the door to communion of the unbaptized and will put a resolution of General Convention in conflict with the canons of the church, so I urge a no vote.”

Bishop Geralyn Wolf of Rhode Island, who converted to Christianity from Judaism and was baptized as an adult, said that when her priest invited her to consider being baptized, “I had to deal with my identity. I had to deal with what it meant to make a public affirmation of faith.”

“And for those who have found their faith through communion I say ‘Wonderful, I’m happy for you. I’m not going to turn you away if you come up to the altar rail.’ But I also want to say I’ve written a little banner here for myself that says ‘open baptism’,” she said “I rarely ever see the invitation to adult baptism expressed in our churches and if we’re talking about identity and if we’re talking about faith and mission I believe this is where it begins.”

New York Bishop Mark Sisk moved that the bishops strike the “pastoral sensitivity” sentence but approve the rest of the resolution because doing so “communicates clearly where we are.”

Blauser said the deputies’ committee then faced in the “last minute on the last day” whether to recommend that the House of Deputies concur with the amended resolution, of which he said “we thought that it really gutted the resolution as we intended it.” The committee did recommend concurrence and the one-sentence resolution was accepted by the entire house.

The Rev. Anna Carmichael, who helped write the Eastern Oregon resolution, told ENS on July 23 that she wished convention had accepted the entire substitute resolution because she found it to be a “really great example of how we try to find a middle ground and work together in this church even when we don’t necessarily always agree theologically or even pastorally.”

Carmichael, for whom this was her first foray into General Convention resolution drafting, said she was glad C040 “sparked a lot of conversation both online and actually at convention.”

“We should be proud as a church to be willing to engage in these kinds of dialogues,” she added.

Ely admitted she was “very frustrated with the disconnect that I see between the interest in the particular topic and the unwillingness of some people to have a church-wide discussion on it,” which she said was “all we were trying to do with what we sent” to convention.

“There were many people at the hearing that wanted to talk about this particular thing and I think when people show up to give their input and they show up in such numbers it’s irresponsible of the church to basically shove it aside,” she said. “It’s time for a conversation.”

Blauser told ENS that the committee rejected the idea of a study, “which was going to cost money and we felt that we did not to have another committee set up to do this [because] the study will be done by the reality that this practice has been in the church and will continue in the church at some level, and we will continue the discussion.”

Both Carmichael and Ely agree that the question of what is variously called open communion, open table and communion of the non- or unbaptized is not going to go away.

“I think we go back to meeting it head-on with a resolution in three years, again saying we’re doing one thing and we’re saying another,” Ely said.

Carmichael said she was not entirely surprised that the committee’s resolution was amended in the House of Bishops, “but I think it gives us great some food for thought and an opportunity to reflect on how we could better present a resolution like this in the future.”

“This discussion is ahead of us and we’re not going to be able to avoid it forever, particularly if we re-vision ourselves,” Ely said, referring to convention’s decision to re-imagine the work of the Episcopal Church in the 21st century.

She said that future decisions about open communion will inevitably be “a by-product of the way we’re going to be church in the future.”

Meanwhile, Carmichael says she will not change her practice of inviting all people to receive communion at St. Mark’s Episcopal Church in Hood River where she is rector.

“While I understand that as a priest I have taken a vow to uphold the rubrics of the prayer book, I feel that sometimes pastoral care and pastoral sensitivity are equally as important as our theology behind what we do,” she said, adding that the Episcopal Church is always striving to extend its welcome to all people “and I hope that at some point our welcome will include unbaptized at the communion rail.”

— The Rev. Mary Frances Schjonberg is an editor/reporter for the Episcopal News Service. The Rev. Pat McCaughan, an ENS correspondent, and Melodie Woerman, a member of the ENS General Convention news team, contributed to this report.