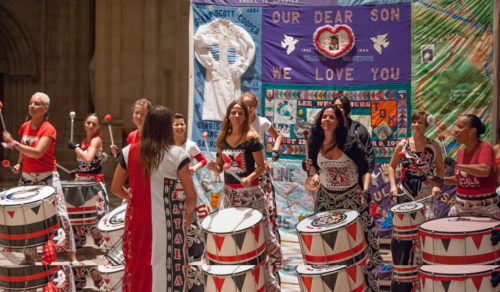 [Washington National Cathedral] Washington National Cathedral hosted a gathering of more than 850 individuals from many faith traditions on July 21 for “From Darkness to Light,” an evening service to memorialize those lost to AIDS and uphold a spirit of hope and commitment during the NAMES Project Foundation’s 25th anniversary display of the AIDS Memorial Quilt in Washington, D.C.

Nine 12-foot select blocks from the quilt, the world’s largest living memorial, were on display throughout the nave, with two blocks hanging from the north and south balconies.

Batalá Washington, D.C., a band of Afro-Brazilian samba-reggae percussionists, provided a lively welcome to attendees arriving outside the cathedral. Five individual three- by six-feet panels of the quilt were also part of the procession. More than 50 service participants comprising Christian, Jewish, Hindu and Muslim faith leaders, people living with HIV/AIDS, their families, friends, loved ones, caregivers and members of an international planning committee, processed as Karen Rugg performed “Threads,” a solemn composition for Native American flute.

Sandra Thurman, executive director of the Interfaith Health Program at Rollins School of Public Health, Emory University, which was a primary sponsor of the service, and the Rev. Francis H. Wade, interim dean of the cathedral, welcomed attendees.

“The place where you are gathered is called, in the Christian tradition, the nave,” said Wade. “It is a Latin word for ship. And what it means literally is that when we gather, we are in this boat together — literally in this boat together. … This Cathedral has been in this boat for a long time, and we will be in it for as long as it takes and we are honored to share this particular moment with you.”

Calls to prayer from each faith tradition sung from the cathedral’s west balcony alternated with Scripture readings by the Rev. Canon Gideon Byamugisha of the Anglican Church of Uganda; Rabbi Aaron Miller of Washington Hebrew Congregation; Abhay Das of ISKCON, a Krishna-Hindu organization in Washington, D.C.; and Imam Johari Abdul-Malik of the Dar Al-Hajirah Islamic Society.

A special commemoration included prayers written by Marcia Falk — “It is ours to be praised,” “Hallowing our namings,” and “Each of us has a name” — and chanted by Ana Hernández with congregational refrain. All were invited to offer silent prayers as service participants and cathedral acolytes lit four stations full of votive candles in the middle of the nave.

Dr. James W. Curran, who in 1981 coordinated the task force on acquired immune deficiency syndrome (AIDS) at the Centers for Disease Control and Prevention (CDC), was the featured speaker. Curran led the HIV/AIDS division at the CDC and went on to attain the rank of assistant surgeon general while there. He is currently professor of epidemiology and dean of the Rollins School of Public Health, Emory.

“The quilts from the NAMES Project are with us as reminders of the commitment of their loved ones. They are no longer recognizable by gender, by age, by race, by sexual orientation, by country of origin. But rather, they are united in their death by the cause — as we are,” said Curran.

Calling for a moment of silence to remember those lost, Curran named a few specific individuals lost from the disease, including Elizabeth Glaser, Rock Hudson and Freddie Mercury.

“It is essential that, throughout the world, the communities of diverse faiths unite in their charitable endeavors to provide hope for the hundreds of millions with HIV or at great risk,” Curran said.

Two rarely displayed panels from the quilt were prominently displayed against the intricately carved wooden rood screen of the cathedral, providing a striking backdrop to the platform in the cathedral’s crossing where the service took place. “The Last One,” a panel unveiled for the first time to the public Saturday morning on the National Mall as part of the NAMES Project Foundation’s opening ceremony of its “Quilt in the Capital” events, was received by the foundation (caretakers of the quilt) in 1988. It arrived with a handwritten note that read: “I hope this quilt will find a permanent place and help mark the end of this devastating disease.” The panel itself simply said “The Last One” in white letters on a black background. The NAMES Project recognized its importance immediately and has held on to it — and to the hope it conveys — to be able to sew it into the quilt as the “Last One.”

“The Last One is both a quiet prayer and a stark reminder of all that we are working to achieve,” said Julie Rhoad, president and CEO of the NAMES Project Foundation. “There is renewed hope that the end of AIDS is possible as science has begun to articulate a new narrative. We are sharing the ‘Last One’ with the public now because it’s critical that we all realize how each one of us has an important role on the road to the end of AIDS: the last person to face stigma and discrimination for living with HIV, the last new infection, the last mother-to-infant transmission, the last child left orphaned and the last death from AIDS.”

Also on display against the rood screen was a block of panels on loan from St. George’s Cathedral in Cape Town, which had been blessed by Archbishop Emeritus of Cape Town Desmond Tutu prior to its departure from South Africa last week. Arriving at Washington National Cathedral July 18, it was presented in a ceremony including another blessing led by Bishop Jane Holmes Dixon, former bishop of Washington, pro tempore, with remarks offered by the Hon. Ebrahim Rasool, South African ambassador to the U.S.

Special anthems were performed by three different vocal groups. Among them were Potomac Fever, a small ensemble from the Gay Men’s Chorus of Washington, D.C., which sang Fred Small’s lullaby “Everything Possible” in an a cappella arrangement.

The Cathedral Singers, led by Director of Music Canon Michael McCarthy, sang Leo Sowerby’s “Eternal Light” and later “When Night Fell,” a new composition with music by David Hurd and text by Carl Daw and Adam Tice, commissioned especially for the service by the planning committee. The Washington Performing Arts Society’s Men and Women of the Gospel Choir, led by Artistic Director Stanley J. Thurston, performed an uplifting rendition of the traditional hymn “Oh Happy Day,” with worshipers standing and clapping in rhythm. A final blessing and sending forth followed with all gathered joining together in singing the South African freedom song, “Siyahamba,” or, “We are marching in the light of God.”

The cathedral’s acting director of worship, the Rev. Gina Gilland Campbell, formulated much of the service’s liturgy in conjunction with an interfaith planning committee coordinated by the Rev. Canon Ted Karpf. The Joseph W. Blount Center for Health and Human Rights at Emory University, Boston University’s School of Theology and School of Public Health, as well as the CDC’s Division of Global HIV/AIDS Center for Global Health in Atlanta, Georgia, were co-sponsors of the service.

The service took place as thousands of people gather in Washington, D.C., for the 19th International AIDS Conference, hosted by the United States for the first time in 22 years and anticipated to be the largest conference since the gatherings began in 1985. The day also launched “Quilt in the Capital,” the NAMES Project’s commemoration of the quilt’s 25th anniversary, with a major display on the National Mall and portions of the quilt on display in more than 50 other locations throughout the Washington area.

The National Cathedral’s ministry around HIV/AIDS dates back to 1986, when it hosted a conference on the role that religion might play to bring greater awareness to the issue. The cathedral has also hosted the quilt and held services around it in 1988, 1990, 1993, 1994, and 1996.