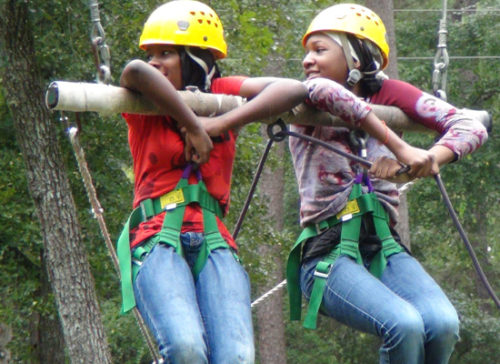 Children from the Holy Land and the United States work together to conquer the ropes course at Camp Allen during “Kids 4 Peace” interfaith camp. Photo/Diocese of Texas

[Diocese of Texas] Over the past decade, countless conventions, meetings and summits have been held in search of a long-lasting peace between faith communities in Israel and Palestine, but for the children who take part in Kids 4 Peace, the solution seems simple because they experience it every day.

Kids 4 Peace is a interfaith program developed through the Episcopal Diocese of Jerusalem and St. George’s College in Jerusalem that brings together Christian, Jewish and Muslim children from the Holy Land and the United States to take part in summer camps. The first camp took place in 2002 at Camp Allen, and 10 years later, Kids 4 Peace returned to the Diocese of Texas to inaugurate an annual gathering for interfaith education.

Typically, 12 children, four of each faith, come together from Jerusalem along with 12 from the United States. They live, play, work and worship together for two weeks while exploring their similarities and differences. Currently, Kids 4 Peace has five two-week summer camps across the United States.

“Ten years ago we had this dream of a summer camp where children would have the chance to meet each other face-to-face, cross the lines of conflict, learn about each other’s lives and religions and lay the groundwork for a better future,” said the Rev. Josh Thomas, executive director.

Looking at the group at Camp Allen in July, it was hard to tell which kids came from which country or religion. They liked the same games, wore the same clothes and spoke at least some English. During dinner one evening, they all sang along to a pop song from the British/Irish band, One Direction, belting out the signature line “You don’t know you’re beautiful” in unison.

“We are all friends,” said 12-year-old Eliya, a Jew from Jerusalem. “Jews, Christians, Muslims. That’s how it is supposed to be, so it’s good.”

The children spent the week observing the practices of other faiths including Jewish Shabbat prayers, Muslim prayers and an Episcopal Eucharist. After each service, they asked and answered questions to learn more about the three faiths.

Building friendships and seeking common ground came easily for the Kids 4 Peace throughout the week. They conquered physical challenges as well as emotional ones. One of the first activities they participated in together was Camp Allen’s challenge course and giant swing. The children had to work together, encourage and help each other to climb obstacles and ride a zip line more than 50 yards. 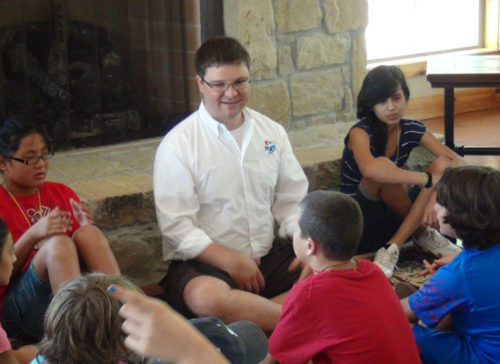 Kids 4 Peace campers engage in discussion with an adult leader. Photo/Diocese of Texas

“It’s fun because I’m not thinking, ‘They are not from my religion,'” said Eyal, another 12-year-old Jew from Jerusalem. “I don’t think like that.

Crossing cultural barriers is the central theme of the Kids 4 Peace camp, and Thomas sees a uniting principle that all three faiths can rally around.

“Kids 4 Peace’s bottom line message is that all the children of Abraham can live together in peace,” Thomas said. “Peace and being a peacemaker is a priority and an imperative of each religious tradition on its own as well as something that is strengthened by our time together.”

Throughout the week, the children displayed endless curiosity and love for each other. If one of them upset another, they were quick to forgive and forget. If another needed encouragement, they would gather together to cheer each other on. The ease with which they achieved a common understanding and the joy they expressed at every moment of the day leads one to wonder if these children could teach adults.

“Adults could learn that maybe not everyone from a certain place or group is bad,” said 12-year-old Serifat, a Muslim from Houston. “We are just like everybody else.”

“A lot of adults are not nice,” Eliya said. “I would just tell them not to behave like that because it’s not nice, and if we keep doing that, the world will never have peace.”

“If you are fighting because of different religions, it’s not a good example for anything,” Eyal said. “It’s just not the right thing to do.”

The simplicity of their message may seem trite when compared with the complexity of the conflict in Israel and Palestine, but perhaps they are on to something.

“I often say the Kids 4 Peace is the closest thing I have experienced to a glimpse at the reign of God,” Thomas said. “The ease at which they come together and form relationships is so natural that it offers a glimpse into human possibility of what we are here on this earth for. It feels as if they have been waiting their whole lives for this chance to be together.”

Thomas thinks that peacefulness is the natural state of these children, and if they can harness it at a young age, they can carry it into adulthood with a deeper understanding of what it means to be different, yet so similar. Kids 4 Peace conducts a continuation program in Jerusalem for 13- to 14-year-olds as well as a new leadership program for older teenagers to learn peace building skills as they transition to adulthood.

“It is possible to love your enemies,” Thomas said. “It really is possible to cross beyond those things that divide people and learn about one another. We can value each other’s dignity and worth while respecting differences.”

Visit the Kids 4 Peace website to learn more about the camps.

— Luke Blount is a staff writer and communications specialist for the Diocese of Texas.