[Episcopal News Service] Faith in the face of discrimination and disease can be difficult, but for more than 750 activists who have arrived in Washington, D.C., ahead of the July 22-27 International AIDS Conference to take part in an interfaith pre-conference, it is also indispensable.

Joining the main event, Turning the Tide Together, which will draw more than 20,000 participants from around the globe, and the two-day pre-conference, Faith & AIDS 2012: Taking Action Together, which kicks off July 20 at Howard University, are 26 witnesses from the 76 countries where being LGBT is illegal.

The witnesses, who each have a faith connection, were brought to Washington by “The Spirit of 76,” a program of the St. Paul’s Foundation for International Reconciliation and the COMPASS Coalition, nonprofits working to end the criminalization of LGBT citizens and to foster dialogue and reconciliation.

They have traveled from as far afield as Singapore and Uganda to share their personal stories and to build partnerships to enable greater engagement and collaboration in the area of faith and rights.

They will take part in plenary sessions, skill-building workshops and daily worship under the theme of health, dignity and justice at the Interfaith Pre-Conference on HIV, before joining the 19th AIDS Conference to hear from HIV experts from a variety of disciplines and learn of the latest advances in HIV science and the most important policy and programmatic issues. They’ll also hear from a wide range of world leaders and celebrities, including former U.S. President Bill Clinton, Microsoft Founder and Chairman Bill Gates and Singer/Songwriter Elton John.

Gathering formally for the first time on July 18 at the First Congregational United Church of Christ in downtown D.C. after a day of sightseeing in 98-degree heat, the group dined together and received a warm welcome from the organizers and from Daniel Baer, deputy assistant secretary of state, who greeted them on behalf of President Barack Obama and Secretary of State Hillary Clinton.

Most had arrived on July 17 and spent their first two nights with hosts from local congregations, among those six Episcopal churches in the Diocese of Washington. (Local coordinator Eric Scharf, of St. Thomas’ Episcopal, D.C., worked with the parishes to find hosts). They will stay at Howard University for the duration of the two conferences, returning to their hosts for the last two nights, when they also will share their stories in their hosts’ congregations. 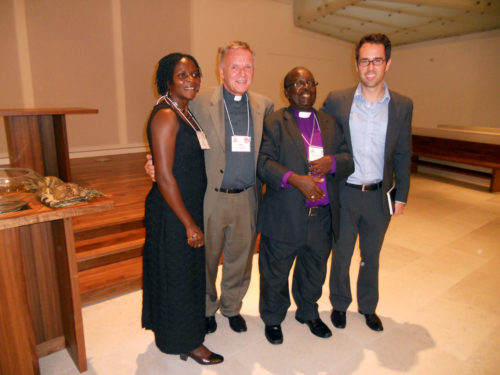 “Often when there’s problems in countries with access to HIV/AIDS medication and treatment, the faith community is in the front seat driving [activism],” said the Rev. Canon Albert J. Ogle, president of the St. Paul’s Foundation and a priest of St. Paul’s Episcopal Cathedral, San Diego.

Baer said one of the questions he’s asked most frequently is how to engage faith communities. “It is the thing everybody seems to identify as the locus of important conversations,” he said.

Commending Obama for lifting the 22-year ban on travel to the United States by people who had tested positive for the virus that causes AIDS — as did Episcopal Church Presiding Bishop Katharine Jefferts Schori and Presiding Bishop Mark Hanson of the Evangelical Lutheran Church in America in a joint statement on the AIDS Conference released July 20 — Baer said it was essential to have these conversations in person.

“In the age of Facebook and Twitter, we can forget how important it is to come together, face to face,” he said. “It’s important not just to exchange information, but to remind each other that we’re not here alone.”

He described the challenge of HIV/AIDS as “the door you can gently open to how to protect issues of human rights of LGBT people,” adding that “you can’t really solve practical problems without protecting human rights.”

Baer said he had learned from retired Bishop Christopher Senyonjo, a gay rights activist from Uganda who was named by the Huffington Post as one of the 10 most influential religious leaders in 2010, that compassion is a two-way street.

“If we don’t acknowledge that the step for many people is uncomfortable, difficult – something they’ve fought for so long – then we won’t get to the second or third conversation,” he said.

Introduced by Ogle as “one of the great spiritual leaders of the movement,” Senyonjo, former bishop of West Buganda, spoke of the need for religious leaders to refocus on the message of love.

Religious convictions aside, Senyonjo pointed out that on a purely practical note, if marginalized people are unable to seek treatment, the AIDS pandemic will become worse.

“It is worse to allow genocide to take place,” he said.

Human rights activist Maxensia N. Takirambule, the Roman Catholic executive director of the Lungujja Community Health Caring Organization in Uganda, said without the support of advocates like Senyonjo, she would not be able to do the work she is doing.

Takirambule has been HIV positive for the last 16 years and in 1999 lost her husband to the disease.

“If I could not get treatment, if I could not find people like Bishop Senyonjo to talk to me… would I be here?” she said. “I had no hope for life. If I had not been empowered enough to do this advocacy, I would not be here.”

Takirambule stressed the need to build strong and enduring partnerships during the conference. “We need a strong advocacy team, because for us in Africa, individually, it is not very easy for us to speak up. But when we form a group…”

During their time in Washington, The Spirit of 76 witnesses will take part in a July 25 advocacy day, said Sandy Sorensen, director of the UCC’s Washington, D.C., office of justice and witness ministries. The group will gather at the Lutheran Church of the Reformation on Capitol Hill for a briefing before forming about 13 teams of three (two international religious leaders and one U.S. accompanier) to meet with government representatives.

“Unless you bring things to the forefront with a visit and a story, these issues can get pushed to the side,” Sorensen said. “It really makes a difference to have real live engagement with people and their stories.”

In addition to these in-person meetings, both the UCC network and the Episcopal Public Policy Network will send out action alerts to gather support for these issues from the wider church.

“We have a very clear mandate to care for the sick and the most vulnerable, and the AIDS pandemic is a very clear manifestation of that in our time,” said Sarah Dreier, the legislative representative for international issues for both the Episcopal Church and the Evangelical Lutheran Church in America.

Dreier described the joint statement released July 20 by Jefferts Schori and Hanson as a “proactive and staunch stance on where these churches stand,” and encouraged members of both denominations to advocate for the allocation of robust funding to make treatment more effective and widespread and to contribute to the de-stigmatization of the disease.

To learn more about how to take action, visit the Episcopal Public Policy Network.

• At 7 p.m. July 21, Washington National Cathedral will host “From Darkness to Light: An Interfaith Service of Hope and Commitment” honoring those who have died and those who continue to struggle to live with dignity and worth in the face of HIV/AIDS. Dr. James Curran will speak at the service, which will be webcast live from the cathedral’s homepage.
• Marking the 25th anniversary of the AIDS Memorial Quilt, the NAMES Project Foundation is overseeing Quilt in the Capital, the display of portions of the quilt at locations around the city. To date, the quilt memorializes more than 94,000 individuals on more than 47,000 panels. Notable panels, blessed on July 18 by Bishop Jane Holmes Dixon, will be on display at Washington National Cathedral through July 24.