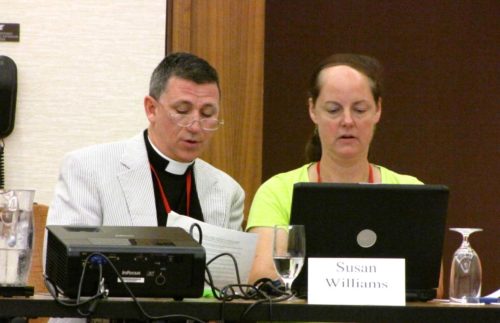 The Very Rev. David Thurlow of South Carolina goes over wording changes in an amendment to a resolution with the Rev. Susan Williams of Western New York during a meeting of the Prayer Book, Liturgy and Church Music Committee.Photo/Sharon Sheridan

[Episcopal News Service] The 77th General Convention in Indianapolis made headlines when it approved a provisional rite of blessing for lifelong same-gender relationships (Resolution A049). But it also considered 35 resolutions on a wide range of other liturgical issues, from authorizing continued trial use of Holy Women, Holy Men to considering the best way to translate the prayer book into other languages.

Nearly one-third of the resolutions involved commemorations on the church calendar.

The Standing Commission on Liturgy and Music will continue revising Holy Women, Holy Men during the 2013-2015 triennium, in part by soliciting responses from the church, according to Resolution A051. Holy Women, Holy Men was first presented to the 2009 General Convention as a major revision of Lesser Feasts and Fasts, the church’s commemoration of various saints and occasions not included as major holy days on the calendar of the Book of Common Prayer. The new version, which added many new commemorations to the church calendar, was in trial use during this triennium. That status will continue during 2013-2015.

The convention directed SCLM (via Resolution A052) to consult with Executive Council’s Committee on the Status of Women, the Episcopal Women’s History Project and other organizations of women in the church to identify women suitable for inclusion in the calendar and to develop liturgical material for their commemoration. It proposed trial use of additional commemorations and propers for: James Solomon Russell, Emily Cooper, Junia and Andronicus, Pauli Murray, the first ordination of women to the priesthood in the Episcopal Church, the baptisms of Manteo and of Virginia Dare, and Thecla.

The convention authorized creating a task force of up to 12 members to study marriage (via Resolution A050). It directed the task force to consult with married couples, single adults and those “in other lifelong committed relationships” as well as with other churches in the Anglican Communion and the Episcopal Church’s ecumenical partners.

General Convention also directed the task force to consult with SCLM and the Standing Commission on Constitution and Canons about addressing clergy’s pastoral needs “to officiate at a civil marriage of a same-sex couple” in states where it is legal. During a July 5 discussion by the General Convention Prayer Book, Liturgy and Church Music Committee, the Very Rev. David Thurlow of the Diocese of South Carolina objected to taking an action he said was contrary to the understanding of marriage in the wider Christian church, including the Orthodox and Roman Catholic churches.

The task force was told to report its progress to the 78th meeting of convention in July 2015 in Salt Lake City.

But Deputy Katrina Hamilton from the Diocese of Olympia, who identified herself as a single heterosexual woman, said she’d like to see the church “have a serious conversation” about marriage. “I think we need this for all of us, not just for our gay and lesbian friends and brothers and sisters, but for me as well.”

The convention approved new rites and prayers for the care of beloved animals (Resolution A054). The resolution calls for the liturgies to be made available “for use in a variety of settings to provide pastorally for people caring for animals.” They include a rite for when a beloved animal dies as well as prayers for when animals are adopted, ill or lost or missing, when an animal is euthanized, when a farm or wild animal dies and when animals suffer during warfare.

Proposed “Liturgical Materials for Honoring God in Creation” (Resolution A053) were referred to the SCLM for further revision in anticipation of their reintroduction at General Convention 2015.

The convention authorized changes in the Book of Common Prayer lectionary to conform with the Revised Common Lectionary (Resolution A059). But it also authorized continued use of the 1979 prayer book lectionary instead of the RCL, with the local bishop’s permission (Resolution B009).

“It’s not the goal of this resolution to supplant the Revised Common Lectionary,” said the resolution’s proposer, legislative committee member Springfield Bishop Daniel Martins. “It is rather a request for some pastoral charity in that, as a bishop, I have received several requests from clergy in my own diocese to allow them to continue using the 1979 lectionary.”

The convention approved Resolution A062 to allow for translations of the prayer book into other languages “so that such translations reflect the idiomatic style and cultural context of those languages.”

It referred Resolution A061 concerning authorizing other Bible translations to the SCLM for further research and review.

In convention discussions and during informal pre-convention discussions on the House of Bishops and Deputies listserv, some had objected to the use of The Message because they said it was a paraphrase rather than a translation. The convention legislative committee initially recommended the resolution pass without adding The Message and deleting the currently approved Good News Bible on those grounds. The resolution explanation had described The Message as a text “that greatly improves upon the Good News Bible.”

Committee member the Rev. Ernesto Medina of Nebraska said he was glad when an amended version of the resolution returned to the committee for consideration because, “in the area of unintended consequences,” deleting the Good News Bible would have meant that the Spanish translation of that Bible – the one most commonly used in Latino ministry – no longer was authorized.

The amended resolution would have included authorizing using the English Standard Version (2007) with the New Oxford ESV Apocryphal (2009). The committee recommended the resolution to the SCLM for further study.

The legislative committee spent some time discussing the electronic availability of liturgical resources, how much it cost to produce such materials and whether they should be available to users at no cost. The committee also requested and heard testimony from Church Publishing Inc. officials about these issues and heard from Martins about an offer from Forward Movement to potentially be involved in producing such materials. Ultimately, the convention referred two related resolutions to the SCLM.

DO60 had asked convention to direct SCLM to start planning during 2013-2015 “for the structuring of all liturgical and musical resources as format- and platform-independent content, so that it may be made freely available to any device or medium,” and return to the 2015 General Convention with a plan to move forward.

D079 would have directed church center staff “to gather and make electronically available and easily accessible, both online for downloads and in electronic media such as CD-ROM, DVD and their successor technologies, all liturgical resources adopted for permanent or trial use by General Convention, as soon as reasonably feasible” but not later than the end of 2013.

• A048, directing the SCLM to form a congregational song task force and to develop and expand the work started in the World Music Project.
• A055, making available “Daily Prayer for All Seasons,” a set of liturgical materials for use by those wishing to pray or meditate throughout the day.
• A056, continuing revision of the Book of Occasional Services.
• A057, authorizing continued use of Enriching Our Worship 1, 2, 3, 4 and 5.
• A058, directing the SCLM “to continue to collect, review and disseminate materials to address Christian anti-Judaism” in Scriptures and liturgical texts.
• A060, continuing work on liturgies for the adoption of children.
• A166, urging participation in the National Week of Prayer for the Healing of AIDS, which begins the first Sunday in March.

— Sharon Sheridan is an Episcopal News Service correspondent and was a member of the ENS news team at General Convention.