I have some bad news. PB&F[1 ] asked Gregory Straub [2] to find the latest audit, and when he went looking in the Archives, he discovered that we have been using the wrong edition of the Constitution and Canons all through our deliberations. The general conclusion is that everything we’ve done here is therefore invalid. Are you ready to start over?

That’s basically what happened with King Josiah. Hilkiah went to investigate the Temple finances and discovered that they’d been reading the wrong rule book for years and years.

We’ve had some struggles here that sound a little bit like that – like whether this body is hierarchical or not, or what kind of governance or structure fits what those guys who held the first Episcopal Church convention had in mind back in 1785.

It will take many more Conventions before we all agree about anything, but, you know what? IT DOESN’T MATTER! We won’t all agree before the Second Coming, but there is only one essential rule – “love one another,” says Jesus, “as I have loved you.” That is the one and only rule of life together in Christ. It is the same one that Augustine of Hippo cited: “love God and do as you please.” Martin Luther’s version was, “sin boldly… and more boldly still rejoice in Christ.” 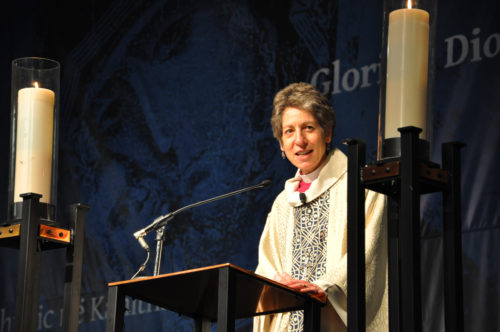 Our task is not to timidly take comfort in the details of our nice behavior – not even in impeccable parliamentary procedure! Life in Christ is risky, it’s about leaping into the uncertain choices before us, like Indiana Jones on that light bridge [3 ] – stepping out over the chasm without knowing if the bridge will be there until we do. Way down in the depths, deep down, the body of Christ has an abiding memory of the trustworthiness of that bridge, even if some of the individual members don’t remember quite so well.

That’s what Lars Olof Jonathan Söderblom offered the world. The body of Christ, indeed the whole body of all faithful people, has much to teach its members about trust and confidence – and it is all about love. 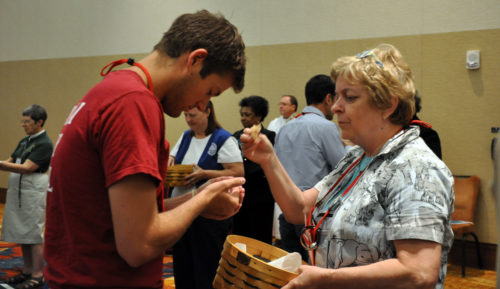 Söderblom – who went by Nathan – was a Swedish Lutheran pastor, theologian, and Archbishop of Uppsala, born in 1866 and died in 1931. He came from a tradition of border crossers, and it was evident even in his early life. His university degree was in Greek, Hebrew, Arabic, and Latin, and he started the formal academic study of comparative religions.[4] In 1890 he came to the United States for a meeting of the Student Missionary Association – something like a General Convention for young adults. He went back to Sweden, was ordained and was appointed chaplain to a mental hospital. Then he started looking for a job that would pay enough to let him get married. Anna Forsell was one of 20 women students among the 1700 men in the University, and she was his writing partner as well as his wife. Söderblom did find a job; he was appointed to the Swedish church in Paris, and stayed there until 1901. That Parisian congregation was filled with Scandinavian artists, diplomats, and merchants, among them Alfred Nobel and August Strindberg, and the several older of the Söderblom’s 13 children.

The Church of Sweden started planting churches abroad in 1626, and that church in Paris was the first one. Several of the ones in the American colonies were later transferred to The Episcopal Church.[5] The Church of Sweden has an ancient tradition of ecumenism, loving and learning and working with others.

Söderblom went back to Sweden to take an academic post in theology at Uppsala University, and he began a theological revival in the Swedish church that spread about the world. He worked on the easy stuff like world peace and liturgical renewal.

Söderblom is remembered most distinctly for starting the modern ecumenical movement, with the Conference on Life and Work in Stockholm in 1925. He insisted that personal spirituality made no sense if it was divorced from work for justice in the larger society, and he repeatedly called on Christian leaders to make common cause for world peace. He received the Nobel Peace Prize in 1930.

Peace begins with loving one another. Start with the people in this room. This body has done a pretty good job over the last few days. We’ve seen quite a few leaps beyond old spheres of safety for the sake of the other. Each person who has stepped out has done so in order to meet another. And we have discovered a new place, a third way beyond what either one knew before.

Take what you have learned here about deep hospitality [6] and keep moving toward the other. Maybe we can even figure out how to love everybody in this church. This reconciling work isn’t like BASE jumping [7] – finding a thrill by stretching some rubber band that ties you to the earth. God’s mission is real faith work, the kind of trusting vulnerability that knows there’s only one rule to keep us safe, the spirit’s tether that will draw us into the arms of a Friend on the other side of that chasm. [8]

So step on out there past this narrow ledge of safety and love one another. Step out there and expect to find your Friend on the other side. Cross the chasm and you will find the other – and every single one of them will bear the image of God. Trust the wings of the morning, and take a flying leap! Take a flying leap into the future, and toward the other. The bridge is there – we call it the Light of the World.

[1] Program, Budget, and Finance – committee that develops the budget
[2] The Rev. Gregory Straub is the Secretary of General Convention
[3 ]Indiana Jones and the Last Crusade
[4] A good biographical review here.
[6] https://www.episcopalnewsservice.org/2012/07/11/the-rev-stephanie-spellers-preaches-at-convention-eucharist/
[7] http://en.wikipedia.org/wiki/BASE_jumping
[8] Draw us in the Spirit’s Tether, music by Harold Friedell; text by Percy Deamer