[ooyala code=”k3OXhjNTrPssyxerv0CTqusJbqQ-aWDc”] [Episcopal Church Office of Public Affairs] The following sermon was presented July 11 by the Rev. Stephanie Spellers at the 77th General Convention of the Episcopal Church, meeting in Indianapolis IN through July 12.

Pray Like You Mean It
Homily for Community Eucharist at the Episcopal General Convention (July 11, 2012)

By the Rev. Stephanie Spellers

Melt me, mold me, fill me, use me. Spirit of the living God, fall fresh on me.

If you want to know what Anglicans believe, hear how we pray. Well, we just prayed, “Give us grace, following the teaching and example of thy servant Benedict, to walk with loving and willing hearts in the school of the Lord’s service.” It’s a beautiful prayer. I sure hope we meant it.

Benedict of Nursia came on the scene in 6th century Italy, when corruption had saturated the church. Even monastics were kind of doing their own thing, indistinguishable from the culture at large.

Faith didn’t change anyone, and it didn’t cost you anything. It was like the man in this morning’s gospel, the one who decided one fine day, “I’m building a tower” – even though he had no idea what it cost, what sacrifice he would bear. In Benedict’s day, people took on the name Christian, but had zero interest in bearing the cross and being transformed into Jesus’ people. Imagine that. 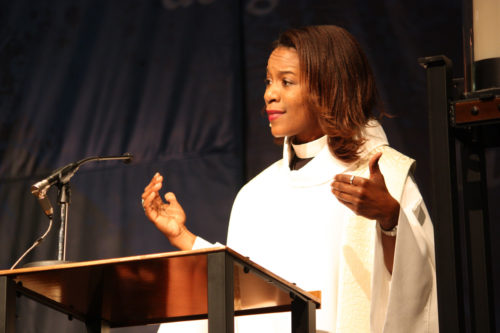 The Rev. Stephanie Spellers preaches at the convention Eucharist on July 11. Photo/Janet Kawamoto

But Benedict wanted to be a Christian. He wanted Jesus to melt him, mold him, fill him and use him, and he wanted to be surrounded by companions who would hold and prod him through that change. So he founded a new monastic community, a “school for the Lord’s service” shaped by three commitments. They were – please join me in some Latin call and response – stabilitas, obedientia, conversatio morum. Let’s break it down:

Stabilitas: is stability, or sticking with your community. Obedientia: obedience, obeying the authority of the community and of God. And finally the commitment toward which everything else pointed: conversatio morum. It’s an untranslatable phrase that means something like committing to this rule, bearing the cross, embracing The Other, and trusting that God is working this out, using all this to convert, confound, transform and ultimately bless you.

That’s following the teaching and example of Benedict. Do we really mean to pray that?

I’m a textbook Generation Xer, so I’ve never been much for stability, even less for obedience. Up to 12 years ago, I was still wandering from church to sangha to fellowship. And when I found this body, I found you. I found so much that I had longed for, and plenty I never would have asked for and now can’t imagine living without. A table where Jesus lives, not in memorium but incarnate. A liturgy that still vibrates with the rhythms of the ancient ordo. A theological tradition that makes sense to me here, here and here. A vowed life as a priest, obedient to the church’s and God’s calling.

I love this church. It’s easily the longest committed relationship I have ever been in. My mom drove up last night from Kentucky, and I’m sure she’ll be standing at the back to thank all of you. The Episcopal Church has given me stabilitas and obedientia, and I know that my salvation depends on the conversion that God is working out in me right here with you. Thank you for that.

But if my Baptist mama drove all this way; if you, my church family, have actually gotten up for the second to last Convention Eucharist, then I have to be honest and tell you the rest of the story.

And what I have seen is, we love to pray these commitments, and we like to live them – as long as they don’t change us too much.

Want to test that theory? Benedict would point to hospitality. In his Rule, he wrote: “Let all guests who arrive be received like Christ, for He is going to say, ‘I came as a guest, and you received Me.'” Benedict told his monks to offer prayers and praises when anyone arrives at the door, especially the poor and dishonored. Send the abbot, send the guest brother, send the whole community to bow and wash that guest’s feet.

And when you do, he said, remember this: you’re not just blessing them. This discipline is about you: you moving out to meet The Other, you being humble and stretched, you being converted and blessed by God. If you’re truly rooted in Christ, if you’re obedient to his commandments, if you have surrendered to the mystery of conversatio morum, you will receive Christ as The Other, you will be changed.

Throughout this Convention, we have prayed and proclaimed our desire to seek and serve Christ in all persons, to welcome emerging generations and cultures. Did we mean to pray that? Do we want the conversion that hospitality entails?

I pray that we do. Because right now, here’s what our legendary welcome sounds like: “The Episcopal Church Welcomes You. We’re so glad you’re here! Now, this is the Book of Common Prayer. Obey it. This is our musical tradition. Master it. This is our English heritage. Adopt it. This is our sense of order. Assimilate it. And the gifts from your home culture, your young culture, your lower-class culture? Would you leave them at the door and pick them up on your way out? They’re not quite Episcopal enough.”

I do not think we mean to be unkind or unwelcoming. I think we love what we have received and the most natural thing in the world is to share it with others in that very form. I think we are afraid that opening to two-way transformation with The Other could shatter or simply erase the foundations of our Episcopal identity.

Benedict would say this is not so. To be Christian is to engage in a dance. To be Anglican is to engage in a dance. Stabilitas keeps us anchored, holding fast to what is holy and true. Conversatio morum makes us free to say, “Here is the way we have known Jesus. May this path bless you. How have you known him? What song sounds like God to you? What dream has the Spirit whispered to you in your ear? I am confused, I am scared. But I embrace this dying and rising, this sacrifice and blessing, this transformation into the fullness of Christ. And, I embrace you.”

The prayer to be like Benedict will shatter our well-drawn boundaries, it breaks our hearts, it grows our capacity to love and to fail, and sends us humble as beggars into the arms of Jesus and the arms of the stranger. It is a dangerous prayer. Pray it anyway. And then watch out. God might just give you what you prayed for.