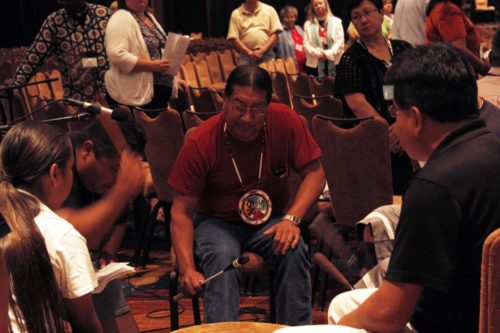 [Episcopal News Service — Indianapolis] Erma J. Vizenor, chairwoman of the White Earth Nation, stepped to the microphone and told the story of a beautiful young woman who, two weeks after being crowned princess during the nation’s June Pow Wow, hanged herself in her basement.

“She’d been sexually abused, raped, and carried all the pain within her, and so she took her life,” said Vizenor, sharing the young woman’s story as an offering “towards awareness and history” during “A Lament Over the Doctrine of Discovery,” a gathering held July 10 at the J.W. Marriott.

The three-hour lament began with an hour-long vigil. It then moved into a prayerful gathering with music and reflection in support of a communal process seeking awareness and mutual understanding to acknowledge and lament the tragic consequences of the Doctrine of Discovery in hope for a transformed reality.

Sponsored by the Episcopal Church’s offices of Indigenous Ministry, Lifelong Christian Formation, and Social and Economic Justice, the gathering featured the Red Leaf Singers from the Rosebud Sioux Tribe and prayers lead by people from native communities nationwide. The Episcopal Church has four dioceses in Indian Country: Alaska, Navajoland Area Mission, and North and South Dakota.

Sarah Eagle Heart, the Episcopal Church’s missioner for indigenous ministry, encouraged those present to open themselves to emotion and vulnerability through which they might find truth even though the transition might be painful.

“Tonight is a gathering of community. We’ll listen and pray together,” said Eagle Heart. “It will be tough, but we’ll continue to move forward in truth and understanding.”

Eagle Heart led the gathering through a prayer for transformation:

O God of all Earth
bless us into the spiritual call
to be agents of unity among all people.
Let us not turn aside for the sake of our own comfort
or convenience,
but let us turn instead to stand
in support of our brothers and sisters.
Let their hope be my hope. 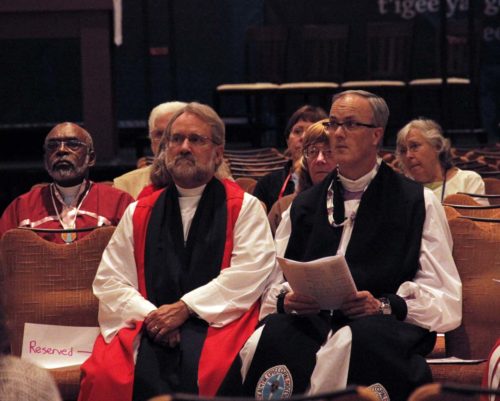 Bishop John T. Tarrant, of South Dakota, and Bishop Mark Lattime, of Alaska, July 10 during A Lament Over the Doctrine of Discovery. ENS photo/Lynette Wilson

The “Doctrine of Discovery” refers to international laws, ecclesiastical documents and policies that were understood to set forth the ways colonial powers laid claim to newly discovered territories, beginning in the early 1500s and continuing through the 1700s. The doctrine gave the church’s full blessing and sanction to the colonizing dispossession — and resulting genocide — of the indigenous peoples and lands of the Americas.

Under what was called “Manifest Destiny,” it was believed throughout the 19th century that the United States, specifically people of Anglo-Saxon descent, were destined to expand across the continent.

The 77th General Convention passed a Resolution A128 directing dioceses to examine the impact of the Doctrine of Discovery.

The Executive Council Committee on Anti-Racism proposed the resolution, noting in the explanation that it believed a resolution repudiating the doctrine that passed at the 2009 General Convention should extend “to address all people of color who have experienced and continue to experience oppression because of policies and practices grounded [in] the Doctrine of Discovery.”

The doctrine, the explanation continued, “sanctioned the slave trade in Africa, and the New World, the killing of indigenous people in the Americas, the forcible placement of native children in residential schools where they were forbidden to speak their own languages, and were physically, emotionally and sexually abused, the taking of native lands and the overall attempt to destroy indigenous cultures.”

Asked in an interview with Episcopal News Service earlier in convention what the church’s actions on the doctrine meant to the Native-American population, Deacon Terry Star, said, “Repudiating the Doctrine of Discovery is very important to us. But what concerns me [is], black, Hispanic and Asian leaders are supportive and participating in our work, but you don’t see many European Americans, and the discovery affects them as well.

“I find that white people find it difficult to accept their historical role in oppression of people of color,” said Star, a deputy of the Diocese of North Dakota and a member of Executive Council.

Repudiating the doctrine acknowledges how native people were treated historically and how they are treated today, said Star, who is part of the Standing Rock Episcopal Community of North Dakota.

“I may not have been rounded up, given small pox-infected blankets or beaten for speaking my language, but I live with the aftermath,” he said.

Before contacted by Europeans in 1492, Native Americans had sophisticated political and education systems and a vibrant culture. Following contact came colonization, displacement and, in some cases, “entire tribes were wiped away,” explained Vizenor.

“That’s the history now embedded in the Doctrine of Discovery,” said Vizenor, the first ever woman elected chairman of White Earth Nation, located in Minnesota.

Later, she said, came the missionaries deployed to “civilize” and “Christianize” the native people, and in 1789 the first of what later amounted to more than 100 boarding schools, where in some cases children as young as 6 were taken from their families and enrolled, and their language and culture were taken away. These children were not taught academics, Vizenor said, but rather girls were taught home economics and boys trade skills, spending half the day in hard labor.

After the boarding schools, came the adoption period from 1950-1970. “Twenty-five percent of our children were adopted out, taken away,” said Vizenor. “Can you imagine the trauma in the home … and the child raised isolated?”

The trauma still felt in Native-American communities today, the result of genocide and the destruction of a culture and a people, and continued oppression have lead to despair, hopelessness, high suicide rates and drug and alcohol abuse, Vizenor said.

Following passage of General Convention’s 2009 resolution repudiating the doctrine, the Anglican Church of Canada took a similar action in 2010, followed by the World Council of Churches in 2012.

Since 2009, the Episcopal Church has produced resources, a video exploring the lasting impact of the doctrine. For Lent 2012, the church issued the third in a series of Lifelong Faith Formation resources for congregations, “Seeking God’s Justice for All,” exposing the Doctrine of Discovery.