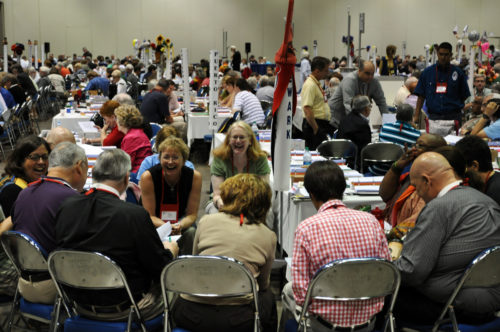 The deputations from Albany and Newark gather July 11 to discuss the proposed 2013-2015 budget at the start of the House of Deputies’ committee of the whole session prior to formal debate on the budget. ENS photo/Mary Frances Schjonberg

[Episcopal News Service] The budget for the Episcopal Church in the 2013-2015 triennium was unanimously adopted by the 77th General Convention July 11 with little fanfare.

Joint Standing Committee on Program, Budget and Finance chair Diane Pollard, deputy from New York, moved the budget’s enabling Resolution A005 in the House of Deputies. The members debated the budget for about 20 minutes, rejecting three attempts to change its revenue or expense categories.

Earlier in the day, the deputies had spent an hour discussing the budget as a committee of the whole before beginning formal debate.

They passed the budget on a voice vote, with no dissenting voice heard, and sent it to the House of Bishops where Maine Bishop Steve Lane, PB&F vice chair, asked his colleagues to concur.

Three bishops spoke to the house, taking just more than three minutes, before the house approved the budget by voice vote.

The budget is available here. 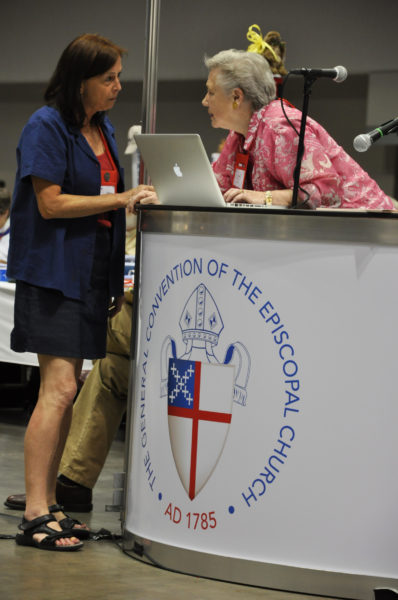 Diocese of Fort Worth Deputy Katie Sherrod, right, and Deputy Barbara Caum of Bethlehem consult July 11 as Sherrod prepares to comment on the proposed 2013-2015 budget during the House of Deputies’ committee of the whole session prior to formal debate. ENS photo/Mary Frances Schjonberg

The spending portion of the budget is allocated according to the Anglican Communion’s Five Marks of Mission, and the categories of administration and governance.

The budget assumes $73.5 million in commitments from the church’s dioceses (line 2), nearly $4 million less than that in the current triennium. That total is based on keeping at 19 percent the amount that the church asks dioceses to annually contribute to the church-wide budget.

While the budget asks for 19 percent from the dioceses each year, not all dioceses give the full amount and thus the projected diocesan income is forecast, in part, on giving trends. For instance, Barnes told the committee earlier in the convention that the average rate of giving in 2012 has been 15 percent, with the asking at 19 percent.

Just more than 41 percent of the dioceses and regional areas have committed to contributing the full amount in 2012, according to a list here.

The budget revenue also includes a five percent draw, or dividend, on the income from the church’s approximately $215 million in unrestricted invested assets. The draw amounts to $25.5 million, compared with $27.5 million in the current triennium (line 3).

In addition, the budget will draw another $4.1 million of the income from unrestricted assets as a one-time grant to pay for a new development office (line 4).

The rest of the budget’s income comes from rental of 3.5 floors of the church center in New York, General Convention income from registration and exhibitor fees, event and program fees and other small income sources

The budget anticipates a reduction in the churchwide staff of 12 positions or 10.75 full-time equivalents. Some of those positions are currently vacant and the other reductions will be allocated by program heads and the chief operating officer, PB&F said.

Canonical expenses are funded at $20.1 million, corporate at $33.9 million and program at $57.3 million. The amounts for each category in each year are specified in the budget resolution.

A major new feature of the budget is $5.5 million in block grants to pay for new mission work. The committee sees the grants as a way to “create collaborative partnerships with dioceses and congregations” for which the Episcopal Church will provide seed money and/or matching grants, along with staff support and expertise, according to Lane. The precise planning of the program and grants is left to Executive Council and the church center staff, the committee said.

Even though not every new program will be successful, the committee said, it urges “experimentation” with a full accounting of the results to the next convention.

During their debate July 11, deputies rejected amendments to:

During the short discussion in the House of Bishops, Connecticut Bishop Ian Douglas said he would vote for the budget, but added that he would be remiss if he did not express his dismay about one line item.

He called attention to the fact that 2013-2015 budget will give $700,000 to the Anglican Communion Office. Douglas, the church’s episcopal representative to the Anglican Consultative Council, note that the amount is 30 percent of what the ACO asks of the Episcopal Church. The church gave the ACO 50 percent, or $1.16 million, of the asked-for amount in the current budget, he said.

“This runs somewhat contrary to the overtures of our support and participation in the councils and as a constituent member of the Anglican Communion and I would plead that if there is in the future renegotiations of this budget that that line item really be reconsidered,” he said.

More details about the budget are here.