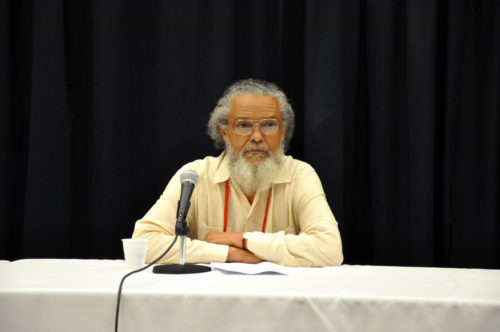 Byron Rushing speaks during a media briefing July 11 following his election as vice president of the House of Deputies. Photo/Matthew Davies

[Episcopal News Service — Indianapolis] Byron Rushing from the Diocese of Massachusetts was elected on the second ballot July 11 to serve as the next vice president of the House of Deputies.

He was nominated by the Rev. Altagracia Perez, deputy from Los Angeles. She said Rushing’s primary ministry is politics, “in the best and most accurate use of that word – the art and science of governance and ordering of our common life.” She said he also “calls people to act on their beliefs in justice and compassion.”

During a July 11 media briefing, Rushing said he is very pleased with the outcome and looks forward to working together with the Rev. Gay Jennings of Ohio, who was elected July 10 to serve at president of the House of Deputies.

According to the church’s constitution and canons, he said, the position of vice president is “to be around and present and known in case anything might happen to the president. I would expect to spend a considerable amount of time in various liturgies in the Episcopal Church praying for the health and wealth … of our president-elect Jennings.”