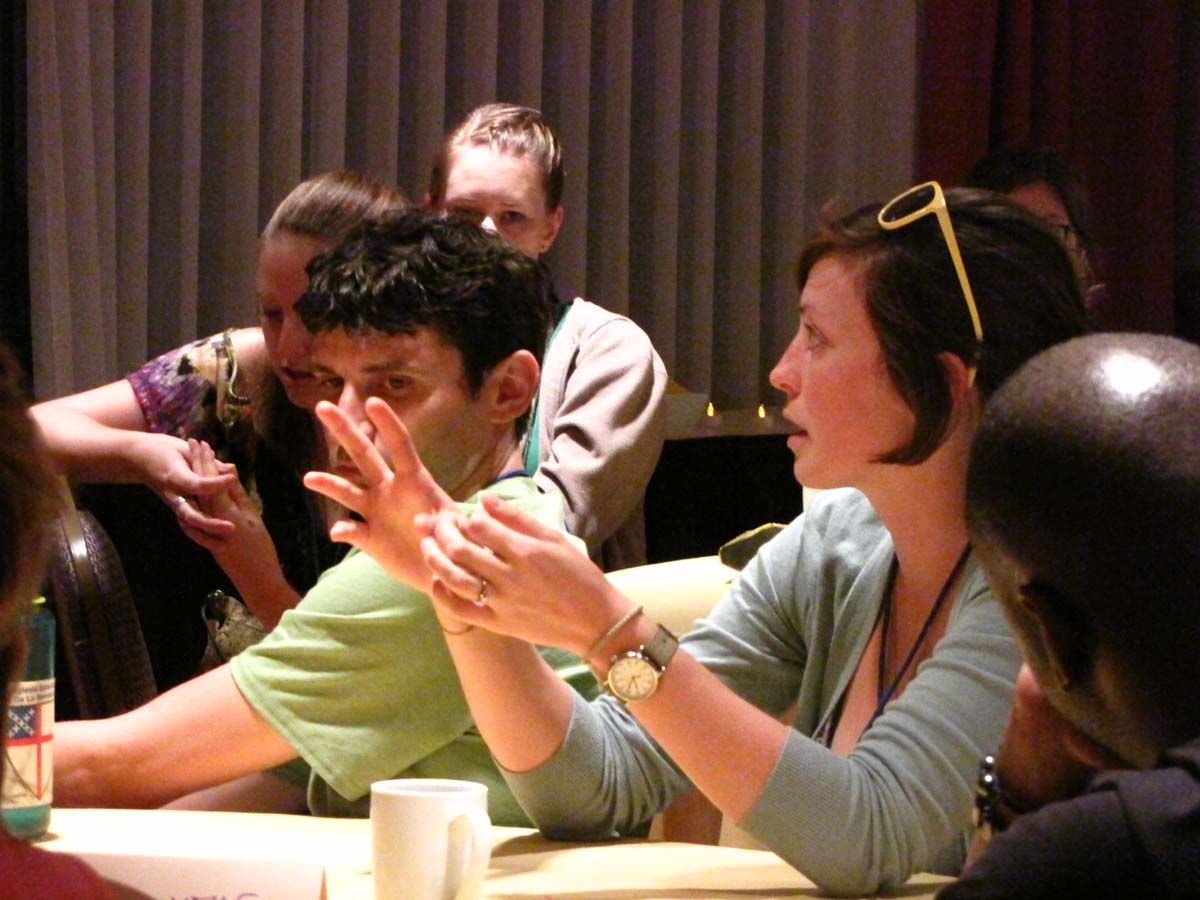 The teens rushed to pull up a website on a cell phone to show General Convention House of Deputies President Bonnie Anderson how those addressing the house were earning points in an online game for such behavior as trying to speak to the same issue more than once (2 points), wearing something strange on their heads while speaking (5 points) or mentioning Bonnie Ball while addressing the chair (15 points).

“That is so fun,” Anderson said. “Did you see the guy with the lobster claw [hat]? … Maybe I could borrow it.”

Anderson spent her lunch break July 9 eating pizza and chatting about serious and not-so-serious matters with the members of the Official Youth Presence. Anderson wrote the resolution in 1982 that created the presence, composed of 18 young people — two per province — who have voice but no vote in the House of Deputies.

Youth and young adults have been a visible presence in Indianapolis, gathering in official groups and unofficial networks to participate in and observe the workings of General Convention.

During the lunch, the teens asked Anderson about how she handled the hectic convention schedule (she admitted to sleeping through her alarm one morning for the first time since college) and commented on her patience in the house.

“I have three promises I made to myself: Be patient, be polite, be professional,” she told them. Another good tip: “Breathe in, breathe out, smile. It works pretty well.”

When one of the youth said that convention remained confusing sometimes, Anderson commented, “It’s hard when you’re tracking something to stop doing that and turn at the drop of a hat and do something else.”

And events can surprise her, too, she admitted. When expected Spanish translations weren’t available during that morning’s session, she said, “I was really thrown for a loop.”

Marlene Rodriguez Hernandez of the Diocese of Puerto Rico and Cole Mayer of the Diocese of South Dakota, the youths’ designated journalists, interviewed Anderson for a video segment on the group’s blog. They asked about youth representation on the Joint Nominating Committee for the Election of the Presiding Bishop, her thoughts about the youth presence, her impending retirement and her favorite part of General Convention. 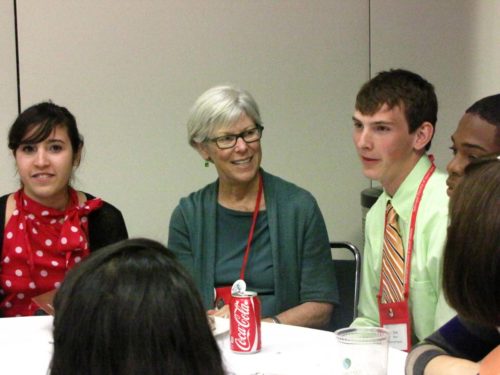 Official Youth Presence members Marlene Rodriguez Hernandez of the Diocese of Puerto Rico and Cole Mayer of the Diocese of South Dakota interview House of Deputies President Bonnie Anderson for a video segment on the group’s blog. Photo/Sharon Sheridan

Reflecting afterward on how the youth program had developed over the years, Anderson said she was impressed by the teens’ vitality, enthusiasm and commitment to knowing what was happening and participating in convention. “It’s just an inspiration to me. They are just the best.”

The teens seemed to enjoy spending time with her as well.

“I think she’s wonderful,” said Emma Grundhauser, 16, of the Diocese of Minnesota. “”You can tell she has a passion for youth ministry.”

The night before, young adults from throughout convention — including young deputies and members of the Young Adult Festival — gathered in the festival’s meeting room at the Hilton before the group’s nightly debriefing and compline.

The gathering followed the formation of a Facebook group for young adults and young deputies to General Convention by the Rev. Megan Castellan, 29, deputy of the Diocese of Arizona, after the draft budget came out. At the July 8 meeting, they discussed why they were Episcopalians and how they had felt empowered or connected at convention.

“It’s important to name why you’re part of the church, especially when the church seems ambivalent about your presence,” she said.

The list of “Why Am I Episco-Crazy” included: “because I was born here BUT my parents got it right”; “because I had a voice”; “because of Scripture, tradition and reason, and the conversation doesn’t end there”; “because of the common Communion cup.”

Castellan said she hoped the group would form an online community via listserv, Twitter feed or Facebook group to stay connected after convention. “Young Episcopalians don’t know each other. You go to a church, and you’re the only person under 50, and it can be an incredibly isolating experience.”

But, she said, “There’s a huge difference between Gen X and millennials” and even between herself and the younger millennials she works with as a campus minister.

“They’ve always grown up in a post-Christendom world,” she said. “Their perception on why you would go to church is generally very different than when I ask older parishioners.”

Sponsored by the Episcopal Church’s Young Adult and Campus Ministries, the festival provides a mentored opportunity for 18- though 30-year-olds to attend the convention.

“It’s just empowering them to be a part of this and helping them to advocate for their presence and advocate for what they’re passionate about,” said Jason Sierra, church officer for young adult leadership and vocations. The festival offers workshops on Episcopal polity and convention, helps participants track legislation and provides opportunities for fellowship and worship.

“It’s an unofficial presence of General Convention,” he said.

This year’s convention has 22 young adult deputies and 95 festival participants, including large groups from the dioceses of Arkansas, Newark, Atlanta and Los Angeles, Sierra said. In a new initiative, 23 young adults are interning with organizations at convention such as Integrity, the Episcopal Peace Fellowship, the Chicago Consultation, Episcopal Camp and Conference Centers, American Friends of the Episcopal Diocese of Jerusalem and Episcopal Relief & Development plus the Episcopal Church Women, he said.

The festival gives young adults a way to engage in convention — some have testified at hearings, for example. And they can participate as much or as little in festival events as they wish.

“They enjoy the flexibility, but they need this jumping off point,” Sierra said.

Youth and young adults gave a thumbs up to their convention experiences.

At the young millennials meeting, Steven Duvoisin of the Diocese of Nebraska said he enjoyed hearing the many stories people shared “about the positive empowering experiences they’re having within the church.”

“I think as young adults it’s easy to get discouraged and feel isolated and focus on the negatives when there’s actually a lot of good things going on and a lot of God things going on,” said Duvoisin, who was helping staff the Tri-Faith Foundation booth in the exhibit hall.

Also from Nebraska, Michael Heller, 28, attended convention as a volunteer, serving as a legislative aide in the structure committee. “I wanted to see how the church works on this level,” he said. “It’s been interesting to work with another legislative aide who is much older. That sort of intergenerational work has been a great experience. There needs to be more of that at General Convention.” 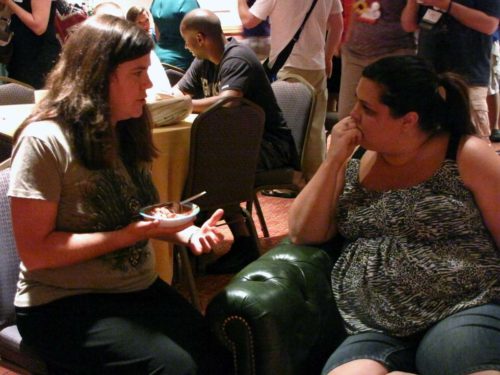 Convention has been “a wonderful experience, other than the ridiculous heat,” said O’Connell, 26. “I haven’t felt segregated or singled out [as a young adult] by any means.”

A client service manager for a software company in Newport Beach, California, she said she seriously was considering participating in the service corps. “I think my life would be better suited in service than it is in software.”

Back at the youth presence lunch, Grace Steele, 16, of the Diocese of Long Island found convention gave her a chance to brush up on her Spanish.

“I thought it would be a really good, interesting experience to meet youth from all across the church, especially Puerto Rico and the Dominican Republic.”

Hernandez, 17, said she wanted to see whether there are differences between Episcopalians in the states and those in her native Puerto Rico. While the language is different, she found, “we’re all part of the same family.”

She also wanted to experience the legislative workings of convention, she said. “It’s a connection between politics and the church.”

“It’s really interesting how we do business as Episcopalians,” said Mayer, 17. “Just being in a group with thousands of Episcopalians is pretty fun and exciting.”