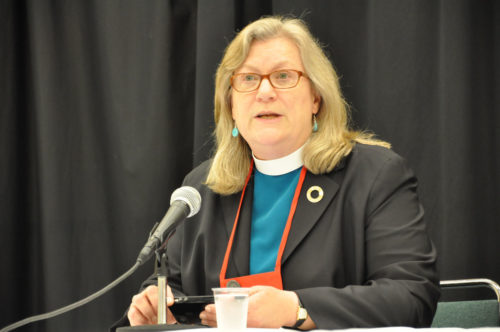 [Episcopal News Service – Indianapolis] The Rev. Gay Clark Jennings from the Diocese of Ohio, an eight-time deputy to General Convention, was elected president of the House of Deputies this morning on the first ballot. She will begin her three-year term at the conclusion of General Convention on July 12.

She will be the third woman elected to the position and the first to succeed another woman. Bonnie Anderson of the Diocese of Michigan is completing a second, three-year term at this convention and chose not to stand for election to a third term.

Jennings addressed her fellow deputies immediately after the vote totals were announced and thanked them for their confidence in her. She said, “I will do my very best to serve you, this great house and the church that we all love.”

She said a special thanks to Deputy Martha Alexander of North Carolina and the Rev. Frank Logue, deputy from Georgia, who also had been nominated, and said she looked forward to working with them. Jennings received 426 votes, five more than the required number to elect. Logue received 266 votes, and Alexander received 140 votes. Alexander then asked that Jennings be elected by acclamation.

Jennings’ husband, the Rev. Albert Jennings, joined her at the podium as she asked deputies to share their ideas with her. “Please let me know how I can best serve you,” she said.

In a written statement released afterward, Jennings said she stood for election because “I believe that God is calling me to work with leaders across the church to change the way we do business in the next triennium. For the Episcopal Church to matter in the 21st century, we have to find ways to move forward together.”

At a news conference, she was asked how the debate over restructuring the church will inform her work as president. Jennings, who was co-chair of the convention’s Committee on Structure, said the group’s deliberations had helped her to see that “this is something that we have to do.” She said, “Bishops, deputies, staff, all kinds of people are saying, ‘We need change.’ I’m not sure we’ve heard a lot of concrete suggestions, but an appetite to delve into a process of exploration and discernment.”

She also said she looks forward to working with Presiding Bishop Katharine Jefferts Schori, whose term ends in three years. “I will do everything in my power to work collaboratively and collegially,” she said, adding, “The presiding bishop speaks for the whole church. I speak for the House of Deputies.”

The House of Deputies is one half of the bicameral General Convention, the Episcopal Church’s legislative body that meets every three years. It includes up to four deputies who are lay people and four who are clergy from each of the Episcopal Church’s 111 jurisdictions represented there. The House of Bishops, made up of all sitting and retired bishops, is the other half. Legislation must pass both houses to be adopted.

In addition to presiding during General Convention, Jennings now also will serve as vice president of the Executive Council and the Domestic and Foreign Missionary Society (the Episcopal Church’s corporate entity). She also will appoint clergy and lay members of all the standing commissions and convention legislative committees.

Jennings left the staff of CREDO, a wellness program of the Church Pension Fund, in June, after working there for nine years. Before that she was canon to the ordinary in the Diocese of Ohio for 17 years. She was ordained deacon in 1978 and priest in 1979, and served parishes in Virginia and Ohio early in her ministry. She just completed a six-year term on the Episcopal Church’s Executive Council. She also is the clergy member of the Episcopal Church’s delegation to the Anglican Consultative Council, the Anglican Communion’s main policy-making body, which next meets this fall in Auckland, New Zealand.