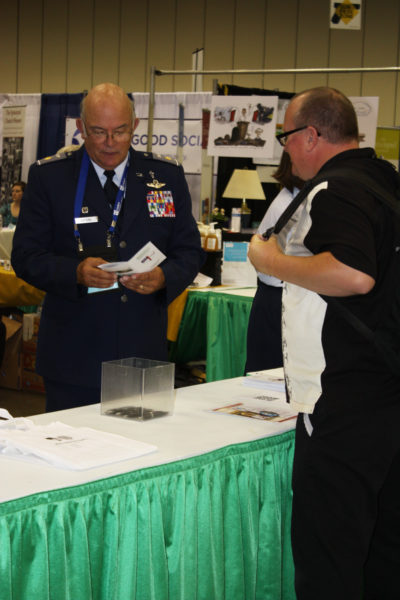 The Rev. Bill Alford of Pennsylvania, a chaplain for the Civil Air Patrol (a civilian auxiliary of the Air Force), shares information about the office of federal ministries with the Rev. Earl Gibson of the Diocese of Los Angeles. Photo/Janet Kawamoto

[Episcopal News Service – Indianapolis] They are members of the U.S. Armed Forces. Day after day they face the challenges of an activity that demands 100% of sacrifice and then some, but that doesn’t diminish their spiritual needs. To serve those who serve is the mission of the Episcopal Office of Armed Services and Federal Ministries, which has maintained a presence in the exhibit hall at General Convention.

Rev. Dr. Wollom “Wally” Jensen from the Office of Armed Services explains that their work is not limited to military personnel on active duty. “We are not limited to the Episcopal community. We also provide pastoral care to other denominations and faiths as well as atheists and free thinkers.”

Ten years of armed conflict in different fronts, prolonged deployments and tours of duty take a tremendous toll on individuals and their families, explains Jensen. “We want to take care of the needs of veterans, many of whom go straight from active duty to homelessness,” he said, adding that the problem is particularly severe among women.

In addition, the Office of Armed Services and Federal ministries is aggressively trying to provide for the needs of Latinos in the armed forces. “We want to attract Latino priest with the calling to join this ministry,” adds Jensen.

In an interview with the Webradio Service of the Latino/Hispanic Ministry of the Episcopal Church, Presiding Bishop Katherine Jefferts Schori spoke on the issue, one that touches her on a personal level. “… I believe that congregations should be more involved with the lives of families of those serving in the armed forces. I have a daughter who is a pilot in the Air Force. I know that chaplains and others have a profound interest in family lives and I think that congregations should educate themselves on this issue.”

The Office of Armed Services and Federal Ministries also serve inmates incarcerated in federal prisons. This is a group that often times is “off the radar” for society, but cannot be ignored, Jensen says. “It is a vocation and a challenge — the reward is the service itself.”

— Cesar Cardoza is a member of the Episcopal News Service team at General Convention.