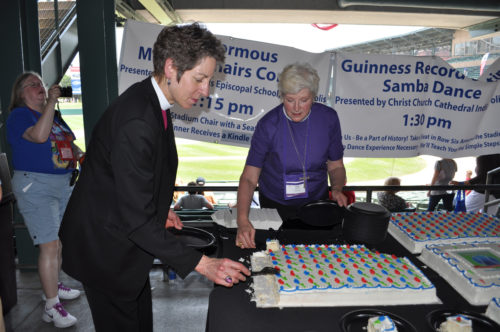 [Episcopal News Service – Indianapolis] The “Indy Experience” event at the Victory Field ball park in downtown Indianapolis on July 8 was filled with color, music and joy. The Indianapolis diocese, host of the 77th General Convention, organized the event to raise funds for the dioceses of Southern Sudan, Brazil and Haiti.

The celebration began with a recognition to Presiding Bishop Katharine Jefferts Schori from Episcopal Camps and Conference Centers (ECCC), which designated Jefferts Schori as it 2012 Hero of Camping, in recognition of her vision and lifelong commitment as educator, priest, bishop and presiding bishop to train new generations of leaders who are changing the world. The ECCC also recognized the presiding bishop’s husband, Richard Schori, for his commitment to help children and young adults discover the beauty and marvel of God’s creation.

Rev. Catherine Maples Waynick, bishop of Indiana, joined the presiding bishop to cut the cake in celebration of the 175th anniversary of the Diocese of Indianapolis. The motto of the celebration is “175 Years Deepening our Faith and Expanding our Reach.”

The party included a game of musical chairs organized by St. Richard’s Episcopal Church. The prize; a ceramic chalice. The music then changed to samba and even the host bishop joined the dancing crowd, in an event organized by Christ Church Cathedral.

Among the revelers were two Latino families from Indianapolis — Gómez-Godinez and Alcauter — both members of Christ Church Cathedral congregation, with the Rev. Canon Zoila Manzanares-Cole, from el Salvador. The other Hispanic ministry in the diocese is at St. John’s Episcopal Church in Speedway.

For a true “Indy experience,” a car race is a must and the Indiana University Campus Ministry built a scale model of a racetrack that allowed guests to “drive” model cars.

Dancers and musicians from the new republic of Southern Sudan took the center stage and filled it with Christian music and African rhythms, along with Bishop Ruben Akurtdit from the Diocese of Bor (Southern Sudan) and Waynick. Both dioceses are working on a project to provide clean water and support Malek Bible College. 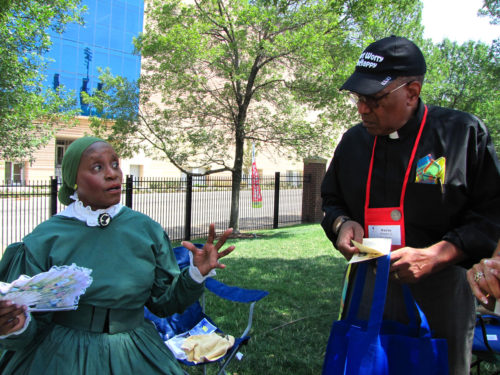 Right across the street in front of the Indianapolis History Museum were Ethel Brewer-McCane and Eunice Brewer-Trotter, who recreated part of their family history as descendants of Mary Bateman Clark. Brewer-McCone portrayed Clark, who was born a slave in Kentucky and was liberated, moved to New York and got a job. Slavery and servitude were illegal in Indiana and Clark demanded her freedom. She later became a leader at the Bethel church in Vincennes, which was co-founded by her husband.

One of the booths also offered visitors the opportunity to learn the art of limestone carving. Nearby another booth offered popcorn, a key agricultural product of Indiana.

It was indeed a very successful party — a real hit at the baseball park from the Diocese of Indiana.

— Araceli Ma is a member of the Episcopal News Service team at General Convention.