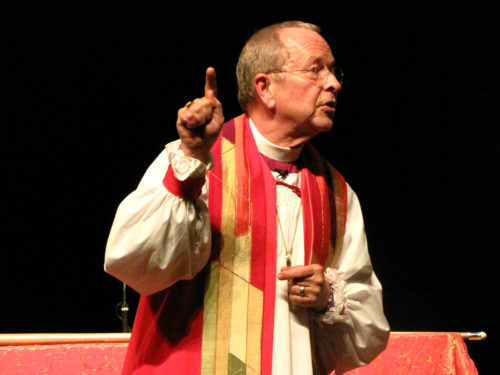 Integrity Eucharist preacher Gene Robinson challenged the congregation to prepare to keep moving. “God is always going to be calling us forward,” he said. Photo./Sharon Sheridan

[Episcopal News Service — Indianapolis] On the day when General Convention affirmed a policy of nondiscrimination against transgender people and the House of Bishops approved provisional use of a liturgy for same-gender blessings, the Episcopal Church’s first openly gay bishop told the LGBT community and its allies to prepare to keep moving.

“Just about the time you get comfortable, God leads you somewhere else,” New Hampshire Bishop Gene Robinson preached to an estimated 1,400 people at the Integrity Eucharist. “We are never meant to stay only right here. God is always going to be calling us forward.”

Confessing that he himself hated camping, Robinson recalled that “Abraham was asked to live in tents. … They dreamed of a real, honest-to-God city — you know, with foundations and that stayed in the same place all the time. But God asked them to live in tents.”

“You know what?” he asked. “I want some answers to things. I want things to stay where I put them and to stay where I think them, and I don’t like to be asked to move on and then move on again and to move on again. And yet, it seems to be the biblical witness that God means for us to live in tents and to move from place to place and to never finally settle down until we’re all in heaven. We are meant to live, in this world at least, in tents.”

“We have been led in our time to recognize and begin to accept and affirm and celebrate gay and lesbian, bisexual and now transgender people,” he said. “What an astounding time to be alive.”

The Eucharist, sponsored by Integrity USA, is traditionally one of the most well-attended related events that take place during each General Convention. This year’s service took place on the fifth day of convention’s July 5-12 gathering here.

Robinson described attending a dinner July 7 for bishops and their spouses the night the transgender legislation passed their house, and how they all wanted to talk about the issue. “We had little tutorials around the dinner table.”

The Integrity service bulletin listed Robinson’s sermon as a “teaching,” and the bishop said he had some “homework” for his listeners.

“To the transgender people who are here, first of all, thank you,” he said. “You have given us an amazing gift. My challenge to you is: Give more. You’re going to have to.”

“There aren’t enough of you to tell enough stories for us to understand so that we can be … a partner in your liberation. You are so important to us, and the world is so dangerous for you, and our job is to make it not so dangerous so that your transgender brothers and sisters can tell their stories. At the end of the day, it’s only our stories that change hearts and minds.”

Addressing gay, lesbian and bisexual worshipers, he said: “Don’t underestimate your learning curve on this. … We are almost as ignorant about this as anyone else, so pay attention.”

Addressing “straight allies,” he said: “I said a long time ago that I thought one of the reasons that homosexuality was being focused on was [that] it was a magnificent way to divert attention from heterosexuals talking about their own sexuality.

And ultimately, he said, “we’ll be asked to move on, because even LGBT work can’t be a tent that we live in forever. As soon as we get a real leg up on this thing, God is going to point out somebody else that we haven’t been paying attention to.”

The real issue isn’t sexuality, he said. “This movement is about spreading the good news of Jesus Christ. We just happen to be pretty dramatic examples at the moment of what happens when you dare to believe that the Lord is this good. … This is about evangelism.” 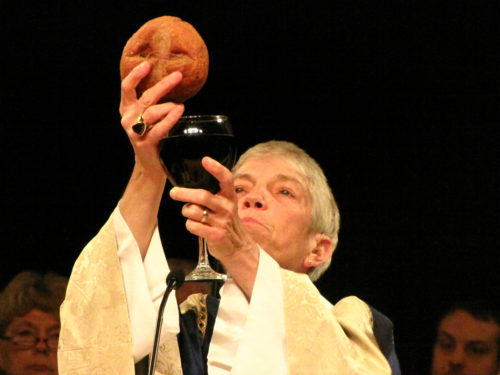 Los Angeles Bishop Suffragan Mary Glasspool, the Episcopal Church’s first lesbian bishop, celebrated the Eucharist, whose theme was “Living our Identities through God.” The Rev. Carolyn Woodall, recently ordained as the first transgendered deacon in the Diocese of San Joaquin, served as deacon of the Eucharist, and all transgender clergy and laity were invited to escort the ministers of the Eucharist to the altar platform. 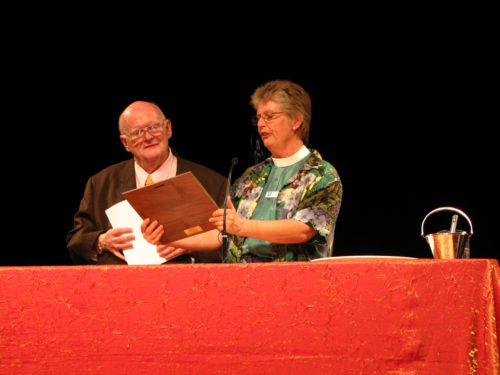 The service began with a presentation of Integrity’s President’s Award to the organization’s founder and first president, Louis Crew of the Diocese of Newark. At a reception before the Eucharist, two longtime friends of his from the diocese paid him tribute.

“I think Louis Crew is perhaps one of the best Christians that I have ever known,” said the Rev. Elizabeth Kaeton. He also is perhaps the most generous and joyful, she added.

“He’s a man who can take insults and persecution and hardships and say, ‘Joy, anyway,'” Kaeton said.

The source of his Christianity, generosity and joy “is a heart that is absolutely brimful with gratitude,” she said. “He’s so grateful for what Jesus has done in his life … for the people Jesus has brought into his life.”

Kim Byham described encounters with Margaret Mead and Archbishop Emeritus of Cape Town Desmond Tutu, telling the audience, “Most of the famous people I have met since I graduated from college have been through the Episcopal Church.”

He called Crew “the greatest person that I have ever met in the Episcopal Church and someone that I’ve come to know extremely well and, other than my husband, is my dearest and best friend. He is the epitome of truth for me.”