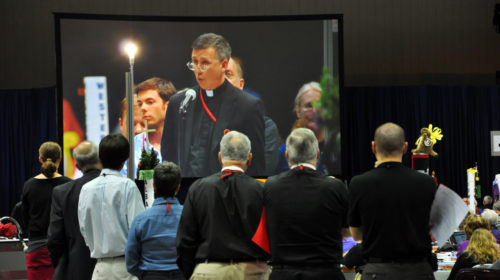 Deputies line up to testify about authorizing a rite of same-gender blessing for provisional use July 10 while the Very Rev. David Thurlow, deputy from South Carolina, gives a minority report from convention’s Committee on Prayer Book, Liturgy and Church Music. The committee’s majority recommended adoption of the rite’s enabling resolution. ENS photo/Mary Frances Schjonberg

In a vote by orders, the House of Deputies concurred with the House of Bishops to pass Resolution A049, which authorizes provisional use of the rite “The Witnessing and Blessing of a Lifelong Covenant” starting Dec. 2 (the first Sunday of Advent). Clergy will need the permission of their bishop under the terms of the resolution.

The motion in the House of Deputies carried by 78 percent in the clergy order, with the clergy in 85 deputations voting yes, 22 no and four divided; and 76 percent in the lay order, with laity in 86 deputations voting yes, 19 no and five divided. The bishops had approved the resolution on July 9 with a roll call vote of 111 to 41 with three abstentions.

The resolution also calls on the Standing Commission on Liturgy and Music “to conduct a review process over the next triennium, making clear that this is a work in progress,” the Rev. Ruth Meyers, deputy of the Diocese of Chicago, said in introducing the legislation to the deputies. She chaired the convention Prayer Book, Liturgy and Church Music Committee’s subcommittee on blessings and the SCLM.

The resolution directs the SCLM to include “diverse theological perspectives in the further development of the theological resource” and to invite responses from throughout the church as well as from the Anglican Communion and the church’s ecumenical partners.

The resolution states that, under existing canons, clergy can decline to preside at a blessing liturgy and says that no one “should be coerced or penalized in any manner, nor suffer any canonical disabilities” for objecting to or supporting the 77th General Convention’s action on blessings. 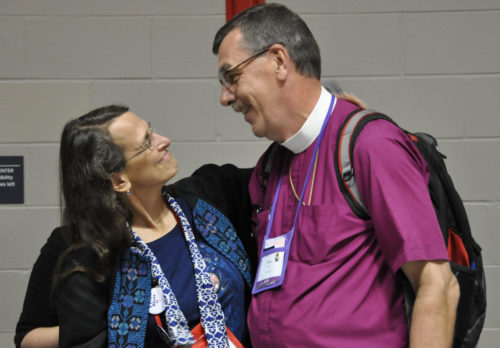 The Rev. Ruth Meyers, Chicago deputy, and Diocese of Vermont Bishop Thomas Ely congratulate each other July 10 after the House of Deputies supported Resolution A049 to authorize a rite of same-gender blessing for provisional use. Meyers and Ely were chair and vice chair, respectively, of the Standing Commission on Liturgy and Music, which proposed the rite to convention. ENS photo/Mary Frances Schjonberg

The liturgy “is a service of blessing for same-sex couples who are in lifelong, faithful monogamous, committed relationships,” Meyers said in a press briefing after the deputies adjourned. “With that service comes a whole package of resources.”

The resources include a theological essay, guidance on canon law, materials to prepare couples for a blessing service and teaching materials inviting all in the church “into some conversation and theological reflection, whether or not they expect their congregations will at any time be prepared to host such services of blessing,” she said.

The package currently can be found beginning on page 184 in the Blue Book. (The convention made some slight revisions to the version of the rite included in the report.)

Before the house debated the resolution, the Very Rev. David Thurlow, a member of the Prayer Book, Liturgy and Church Music Committee and a deputy of the Diocese of South Carolina, gave the deputies a minority report.

“For 2,000 years, the church has had clear teaching regarding marriage,” he said. Noting the committee’s concern about ecumenical relations in other areas, such as maintaining use of the Revised Common Lectionary, Thurlow said, “we haven’t taken heed of the universal voice of the church universal or the Anglican Communion.”

“This resolution marks a clear and significant departure — theological, doctrinal and in worship — from the doctrine, discipline and worship of Christ as this church has received them,” he said. It introduces a “new theology of human sexuality.”

During the debate, House of Deputies President Bonnie Anderson alternately called on proponents and opponents of the resolution.

“The signs outside our church say all are welcome,” said Deputy Pete Ross of the Diocese of Michigan, who urged passage. “Do we need an asterisk?”

The Rev. Charles Holt, Central Florida, commented on the unanimous house vote on a major structure resolution earlier in the session. “That actually very much moved me in a very powerful way. It was the first time I felt united with this group. But then, just a few minutes later, we’re going to receive … something that deeply divides us on very, very core values.”

“Passing this resolution,” said the Ven. David Collum, deputy of the Diocese of Albany, “is just the majority wielding power against those with minority views saying, ‘We don’t care.'” 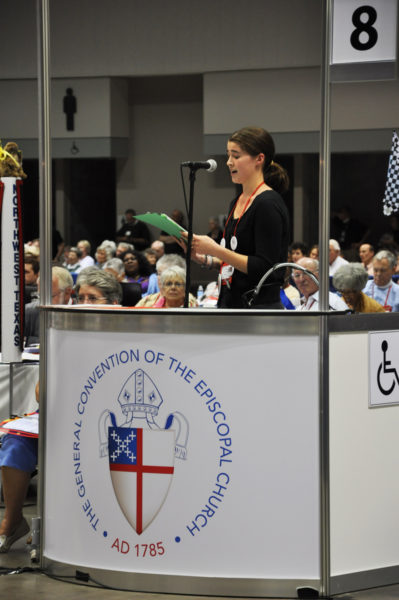 Newark Deputy Caroline Christie explains her support of Resolution A049 to authorize a rite of same-gender blessing for provisional use July 10 during the house’s debate. ENS photo/Mary Frances Schjonberg

The Rev. Jack Zamboni, New Jersey, recalled playing the part of the “groom” in a test run of the liturgy at a Province 2 synod. “My reaction after having participated in that liturgy was that I wished [my wife] and I had had this liturgy when we were married six years ago. It’s a wonderful piece of liturgical work.”

He described how a lesbian couple in his parish, together 30 years, cried when he told them convention would consider authorizing a rite that would bless their relationship. “They had never thought it would happen in their lifetime.”

Some of the house’s young deputies recounted personal stories as they urged passage.

Newark Deputy Caroline Christie, 18, recalled wondering as a child why her two aunts couldn’t marry. “There was no difference in their relationship except that they were both women. As I grew, I began to realize it was an issue of discrimination. … Same-sex couples should be able to be blessed by the church.”

Deputy Ian Hallas, 22, of Chicago, likewise spoke about family: his sister and her civil union.

“The love that she shares with her partner is unconditional and speaks to the ideal relationships all of us should strive to have,” he said.

“I often get asked by churchgoers and non-churchgoers why I am a part of this body,” he said. “The reason I return is for my sister. I seek to assure that she not only has the same rites as myself but also the same privileges.”