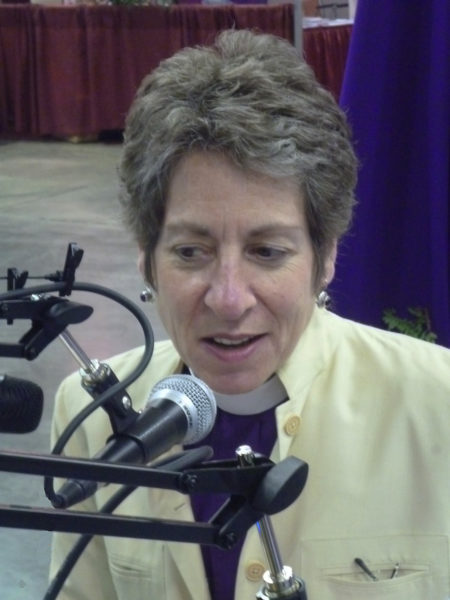 The conversation began with the “next generation”; in particular the so-called next generation Latinos, part of the new face and hope of the Episcopal Church.

KJS:  Yes, the hope but also the present of the Episcopal Church.

Q: Bishop, let’s begin talking about the Anglican Covenant, undoubtedly a long-standing and controversial issue. Many young Episcopalians ask themselves: what does it mean for me? What does it mean for the future of our church, a “yes” or “no” vote on this issue?

KJS: The Anglican Covenant is a very relevant issue for many Anglicans and Spanish-speaking Episcopalians. I believe that the Anglican Covenant is something very British, and it is something that many in the communion see as an attempt to retain or revive the Empire. In some parts of the communion — like in New Zealand, for example — the church, for the most part aborigine, doesn’t like much the idea contained in the fourth section of the covenant. In its conclusion, it sets a process to eliminate part of the communion. I believe, as many people do in the Episcopal Church and other parts of the communion, that right now we have more opportunities to establish relationships and cooperate, and this dynamic generates stronger bonds than those that the Covenant may provide.

Q: Another issue of paramount importance for the youth movement and the NGLs, Next Generation Latinos, at the General Convention is the issue of same-gender blessing. A very controversial topic at many levels; on one hand we talk about amplitude, openness, tolerance, and some sectors believe that tolerance has clear-cut boundaries. How can we bridge the gap within these two positions within the Episcopal Church?

KJS: The Episcopal Church, as other Anglican churches tries to embrace many points of view within the church. We believe that God gives us different gifts and points of view and when we can harmonize these differences we can receive the holy spirit — new creation within the church’s own diversity. If we were to embrace only one point of view, we cannot receive other gifts and opportunities to find God’s creative force.

Q: That was, precisely one of the points you made on this past Sunday’s sermon, when you ask everyone to raise their hands – an individual gesture, yet more meaningful when done in unity.

Q: For these youngsters, they see it as an enrichment of the church. They enjoy – as you said – the fact that there are people with different points of view — a wonderful base for a dialogue.

KJS: This is divine inspiration. Inspiration from the Holy Spirit. It is a gift that can be used for the best or the worse. This could be a blessing for all and we should treat it as such.

Q: Regarding the Hispanic ministry in the Episcopal Church; it could be seen as a small part of the whole. I tend to see it as another door, another portal. The next generation Latinos are fully bilingual … the Hispanic ministry is more of a cultural nature, of heritage rather than linguistic. How do see this emerging group that feels at ease in two different worlds?

KJS: The Episcopal Church in the United States has gone thru experiences like this with other immigrant groups; Germans, French, Swiss. The first generation of immigrants needs to use their mother tongue — we cannot worship in a foreign language. We need to teach [and evangelize] in a context familiar to the worshipers.

Q: I know you have a very busy agenda, but I can’t leave out the issue of Latinos in the armed forces. To serve in the military puts people on a very particular situation. They have their own needs but also their families — and then we have the Latinos. A big problem that we see is veterans that upon going back to civilian life lose everything. Many end up homeless; this is very noticeable within Latino [communities]. What is the Episcopal Church doing for those who gave everything to serve?

— Cesar Cardoza is a member of the Episcopal News Service team at General Convention.