[Episcopal Church Office of Public Affairs] The following is the sermon preached at General Convention for Eucharist on July 9 by the Rev. Dr. Mary Crist (Blackfeet).

Lord, I am yours. Let my words glorify your name.

Greetings, my relatives. I am known as Eagle Woman. I am Southern Robe Indian (Blackfeet). Creator help us all. Hear our cry (prayer). Listen father sun. Watch over all the people.

Occom was also first American Indian to have his writing published. He demonstrated courage, connection, and commitment, qualities that continue to characterize many indigenous people in this church today. He brought the light of Christ to many people.

The qualities of courage, connection, and commitment are the backbone for small church ministry. 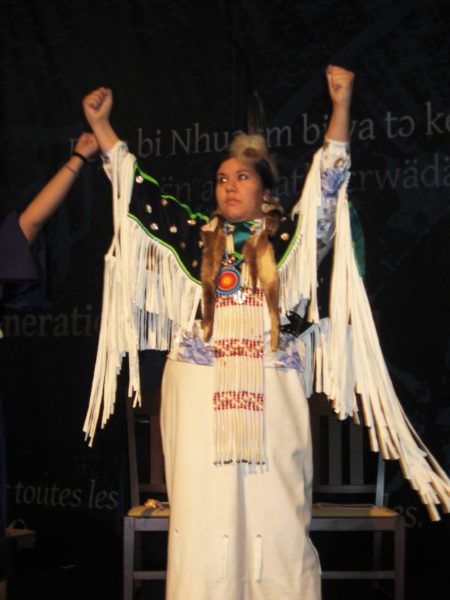 Luke’s gospel today bids us to make this work known. Let it come to light. Celebrate it. Listen to it. In obedience to the gospel of Luke, and in the Native tradition, I share a story of what can happen when we listen.

Shortly after my ordination to priesthood about six months ago, my bishop told me that he was appointing me to serve in a church. I was so excited! This was such good news.

The bad news was that my church had no congregation, no budget, and no salary for the priest.
You see, the congregation at this church had come to the point where as a traditional church it could no longer meet its expenses. This happened even though the former clergy and a few of the faithful had worked very hard and very faithfully. The church in its old form had died.

The faithful few grew a community garden, and it gave life to ministry to the homeless and the hungry.  They sponsored a pow wow with the help of the priest and helped students in a local Native American boarding school. They welcomed new groups to the land.

They listened to the Spirit, and they experienced new resurrection.

Today the church building itself remains beautiful. Located on four-and-one-half acres, it has an expensive pipe organ given by the organ-builder, himself. Silk clergy vestments, beautiful choir robes, and acolyte vestments hang neatly in the sacristy. Silver and gold chalices wait in protective coverings. The brass is polished. The sanctuary light glows. The large altar is covered in spotless linen and brocade. A life-size carved wooded crucifix adorns the wall behind the altar. Sunlight cascades through glass panes set in French doors. Flowering bushes and trees abound. One can almost hear lusty strains of songs sung to a booming organ on a Sunday morning.

Yet, the Spirit called the people to ministry in the community garden.

When the former priest, a Native American, moved away to take care of a sick relative, the bishop appointed me. He asked that we feed the poor, house the homeless, teach the children, and support those struggling with substance abuse and other issues.

When I asked him for more details, he said the Holy Spirit will help you figure it out.

In the first six months of small ministry, my own life has been transformed as it was for Samson Occom. I have learned to listen to that still small voice of the Spirit within, as Luke directs us…to listen deeply.

If you were to ask our community who is the leader, people would say, “we are just following the Holy Spirit.” We pray and we plan as a group. I work from within the circle of our ministry partners.

The church has three staff members. The church secretary, a former Franciscan nun, takes on the toughest people and the most vulnerable with equal grace. She is paid for 20 hours a week and works over 40 hours.
The second staff member, a plumber and welder, was losing his health when he heard a call to take time off “to figure out what that God-thing was all about”. He lived on the street for several months, he fell in love with God.  Although he can fix anything on our property, he says his ministry is to the poor and those trying to escape substance abuse. He says he speaks their language because he was on the street with them. He is unpaid.

The gardener/grounds-keeper/security officer also lived on the street a few short months ago. He began to work in the garden. Today he is healthy and a valued member of the community. His only compensation is a small room where he sleeps at night.

One day I witnessed a woman leaning up against the wall outside the office. She looked lonely, and I asked her if she would like to help us hang some pictures. She now runs the office after the secretary leaves. She is a new person. Her compensation is a monthly bus pass. Recently, she began a new ministry to cook meals using fresh food from the garden.  She wanted to feed some of our homeless friends. “They can’t cook on the street,” she said, and she responded.

Two Talking Circles for First Women of the Land established many years ago are growing. The women come from many Native American Nations, learning from one another. They reach out to students in a nearby Native American boarding school.

Two Spanish-speaking evangelical congregations now worship in our church building. Both are actively involved in developing our community.

Through our Second Harvest, we now distribute food five days a week. We want to improve our kitchen to expand the cooking ministry. We collaborate with the Women’s Sober Living House across the street.

A publicly-funded charter elementary school will open on our property in September. It will develop math, science, and leadership skills for inner-city children. The African- American school principal is also a member of our Partners Planning Council.

In our last report to the bishop, we documented services to more than 500 persons every week.
When I go to the new ministry center, I am filled with joy. It comes from witnessing lives transformed. by people loving their neighbors as themselves. From the many ministries, mission is being born. We are meeting the Five Marks of Mission.

People ask us questions about what is happening at the center, giving us a natural opportunity to speak about our relationship with a loving God. Following the Great Commandment to love another naturally gives rise to following the Great Commission, to share the good news of Christ. We are preaching the gospel in the four directions through our words and actions.

Someone driving by the new ministry center today would probably wonder who planned the signage? The answer is the Holy Spirit. It looks a little bit like signage for a bazaar. One sign invites people to attend Freedom Church. Another tells people about REACH Academy, the new school. Yet another announces in Spanish a family festival that is coming soon. And yes, the Episcopal Church Welcomes You sign is there, too!

It all looks a bit messy. The signs are not color-coordinated. They aren’t the same size or even the same style. All of them are blowing in the wind. And yet, people tell me they are fascinated to see what is coming next. I tell them we are listening to hear what the Holy Spirit has planned for us. We know it will be filled with life, and it will be filled with the love of Christ. We are becoming a new spiritual family – brothers and sisters in the faith…we are the early church resurrected.

What I have learned from this experience is awesome. From what people tell me, the Episcopal Church is dying, but from what I see, the church is being reborn.

We are being called by the Spirit into something new.

I am standing in the middle of the whirlwind.

I can feel the wind on my face. It blows my hair around.

I can hear the Eagle’s call.