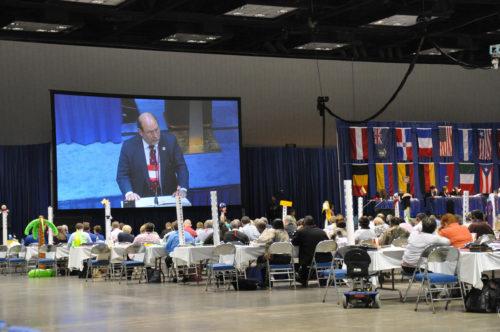 Deputy Russ Randle from the Diocese of Virginia, chair of the national and international concerns legislative committee, addresses the House of Deputies July 9 on resolutions concerning the Israeli-Palestinian conflict. Photo/Matthew Davies

[Episcopal News Service – Indianapolis] The House of Deputies has overwhelmingly supported a call for the church to engage in positive investment in the Palestinian Territories.

A call for corporate engagement with companies that contribute to the infrastructure of the Israeli occupation of Palestinian land also passed but with less enthusiasm.

During the hour-long debate at the July 9 special order of business, the deputies rejected an amendment that would have had the church support a strategy of divestment, boycotts and sanctions against Israel.

The two resolutions will need the backing of the House of Bishops for the legislation to become official Episcopal Church policy.

Resolution B019 affirms positive investment “as a necessary means to create a sound economy and a sustainable infrastructure” in the Palestinian Territories. It also calls on the church to support “the Jewish, Muslim, and Christian study on peace with justice in the Middle East,” and produce an annotated bibliography of resources.

Resolution C060 calls on the church to engage “in corporate social responsibility by more vigorous and public corporate engagement with companies in the church’s investment portfolio that contribute to the infrastructure of the Occupation.”

A minority report, signed by five members of the National and International Concerns committee that has been considering the legislation on the Israeli-Palestinian conflict, also was read out to the deputies. The report expresses “disappointment that the 77th General Convention has not gone far enough in considering measures that would increase awareness and advocacy toward ending the Occupation of Palestine.”

It expressed disappointment in the failure to include in the legislation two documents that had been recommended for study in several resolutions the committee considered.

The texts are Kairos Palestine’s “A Moment of Truth” and an Episcopal adaption of the Presbyterian Church USA’s “Steadfast Hope” that include information about using boycotts, sanctions and divestment to pressure the Israeli government to end the occupation of the Palestinian Territories.

Countering that point of view, Deputy Joanne O’Donnell from the Diocese of Los Angeles said that the documents “are decidedly one-sided. A church that is committed to reconciliation should not be committed to studying just one point of view.”

Deputy Russ Randle from the Diocese of Virginia said the committee, which he chaired, had struggled “to discern how best to provide effective support” for Christians in the Holy Land, for the Episcopal Diocese of Jerusalem and its leader Bishop Suheil Dawani, who has said that a divestment strategy is unhelpful at this time. Dawani told ENS that investment in the Palestinian Territories and in the ministry of the Jerusalem diocese is what is needed.

Randle said that it is important for the church to work in close partnership with Palestinian Christians who can “provide us with the knowledge of the difficulties they face. Engagement at this time will make us far more effective advocates.”

Allison Duvall, a deputy from the Diocese of Lexington and a member of the sub-committee that worked on the resolutions, said the legislation “honors what Bishop Suheil Dawani has asked of us.”

“What we say here will directly impact the lives of our Anglican brothers and sisters in the Holy Land. They need to lift up a document that does not incriminate them in the eyes of the Israeli government,” she said. “The political situation is exceedingly complex and volatile and requires incredible diplomacy.”

The Episcopal Diocese of Jerusalem operates more than 30 social service institutions throughout Syria, Lebanon, Jordan, Israel and the Palestinian Territories. Dawani, addressing the House of Bishops earlier in the week, said that as a diocese that has a presence in five Middle East countries “we have to keep a presence and balance among all the faith communities and governments of that region that will help us to play an important role to continue to be a bridge for peace and reconciliation.”

Presenting Resolution C060, Randle said “the controversial part deals with economic issues” but that the objective is to improve the situation for Palestinians. Some efforts, he said, have called for economic sanctions, and drawn parallels between the occupation and apartheid South Africa.

“Unlike the situation in South Africa where the church supported such sanctions, the bishop in Jerusalem has not supported such a measure,” Randle said, noting that calls for boycotts are “provocative and are unlikely to be effective.”

One deputy reminded the house about the church’s official policy of “positive investment” and “corporate engagement” is recommended in the 2005 report of the Social Responsibility in Investments committee that was endorsed by Executive Council.

The Rev. Vicki Gray, a deputy from the Diocese of California, called for the amendment to introduce the language about divestment and boycotts. “I recognize that this amendment requires courage. I recognize that we will be called names, among them anti-Semite,” she said. “It’s high time that we addressed the elephant in the room and reject that criticism of the Israeli government is not in any way anti-Semitic.”

Four deputies rose to oppose the amendment, including the Rev. Michael Russell from San Diego, a member of the legislative committee. “I don’t find in divestment any generous tit-for-tat or anything that builds trust,” he said.

Also on July 9, General Convention passed Resolution B017 urging the bishops and dioceses of the Episcopal Church “to join in fundraising efforts to help meet the shortfall created by the reduction in funding, and to advocate through the Episcopal Church for restoration of humanitarian fiscal aid to Al Ahli Hospital in Gaza from the global community.”

The United Nations Relief and Works Agency announced June 1 it was ending its financial support to the hospital, an institution run by the Episcopal Diocese of Jerusalem and the Middle East. The decision cuts the hospital’s budget by approximately $1 million per year, or nearly half.

The American Friends of the Episcopal Diocese of Jerusalem last week sent $50,000 to the hospital as part of its ongoing mission to support the institutions of the diocese.

Previous stories on resolutions and public testimony related to Israel and Palestine are available here.