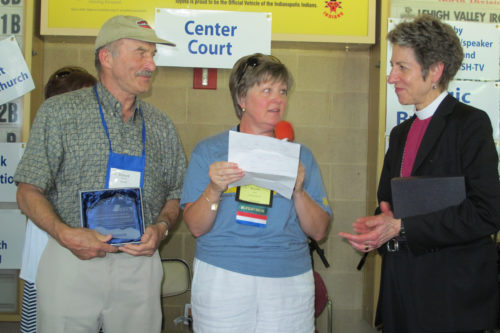 Not only are they outdoor enthusiasts, but Jefferts Schori and Schori also support ECCC’s mission to sustain and enhance the ministry of all camps and conference centers of the Episcopal Church.

Amidst Indianapolis Day festivities in Victory Field, which included samba dancing and carnival games, Jefferts Schori and Schori both received the triennial award, which honors those who have supported the ministry of Episcopal Camps and Conference Centers through personal involvement. Schori is a former board member and Jefferts Schori was the first presiding bishop to be the keynote speaker at ECCC’s annual conference in Mississippi in 2009. She has been supportive of ECCC’s mission throughout her episcopate, and has visited many camps and conference centers.

Weir’s 40-year involvement in Waycross, the camp and conference center in the Episcopal Diocese of Indianapolis, has shown her the “transformative impact that a community of unconditional love, centered in the beauty of creation has in people’s lives,” she said. She recognized the presiding bishop for understanding “the formational role that camps and conference centers play in the spiritual formation and leadership development of youth, young adults, and the young at heart throughout the church and the world.”

In honor of the award ceremony, hundreds turned out in T-shirts from their own Episcopal camps and conference centers.

“As we look around the stadium at all the folks who are wearing their camp or conference center T-shirt, we can see that campers are leaders in the church, and the work we are doing at our camps and conference centers really is changing the world,” said Weir.

“We also understand that spending time in God’s creation, even on a very hot day like today, has a profound impact on our ability to understand and address the complex issues we face daily in our lives as we do the work God has given us to do, in our workplaces, our communities and the world.”

In presenting the award to Schori, Weir said, “you have left your handprint on the hearts of many through your efforts to ensure no Episcopalians are left inside.” A former college athlete, Schori is a highly skilled mountain climber and has made a solo, un-roped ascent of the Matterhorn, climbed Mt. McKinley and other lofty peaks.

Weir recognized the presiding bishop for her efforts in placing a priority on leadership development for youth and young adults alike. A trained oceanographer, the presiding bishop has always displayed her love of the outdoors, and respect for God’s creation. The award given to the presiding bishop read, “in recognition of her vision and lifelong commitment as educator, priest, bishop and presiding bishop to the training of generations of young leaders who are transforming the world.”

The Hero of Camping Ministry Award is the brainchild of the ECCC board of directors and Executive Director Canon Peter Bergstrom. In an address to the House of Bishops July 7, Bergstrom said, “summer camp is more important today than ever, as so many children spend most of their waking hours indoors in front of one screen or another. Direct connection to nature, to God’s creation, is important in so many ways, as is really living together with other children from a variety of ethnicities and economic backgrounds.”

“It is a pleasure to honor them,” said Bergstrom. “We’re grateful for leaders who understand the connection between Episcopal camps and conference centers and the future of our church.”

During General Convention in 2009, ECCC honored the Rt. Rev. M. Thomas Shaw, bishop of the Episcopal Diocese of Massachusetts, with the Hero of Camping Ministry Award.

The House of Bishops recognized Canon Bergstrom July 7 for his 40 years of service to Camp Stevens, the Episcopal camp in the Diocese of Los Angeles and San Diego. He retires this summer from his responsibilities as executive director, but will continue his leadership of ECCC.

Smith, who is an executive at the American Camp Association, a national organization representing more than 7,000 individual members and more than 2,400 ACA-Accredited® camps, spoke about the role that leaders in the faith community have, and their responsibility to enrich lives through the camp experience. She noted the connection between spirituality and nature, saying, “many people have their first encounter with spirituality in the outdoors so when I see these two things together – spirituality and nature – it gives me hope.”

She recognized Schori and Jefferts Schori for their lifetime achievement award and then addressed the audience: “You are all heroes. You have influence as leaders of the church. Use it well.”

— Hannah Wilder is communcations director for the Diocese of San Diego.