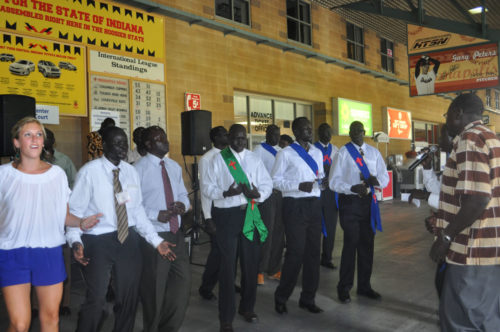 A group of Sudanese men from Chicago attended Indianapolis Day festivities in Victory Field during a General Convention event hosted by the Diocese of Indianapolis July 8. Photo/Araceli Ma

[Episcopal News Service — Indianapolis] On the first anniversary of the formation of the Republic of South Sudan, the Episcopal Church, meeting here in its 77th General Convention, re-affirmed advocacy support for peace in Sudan through the passage of Resolution A019.

“When Sudan divided into two countries, it created lots of challenges,” said Rev. John Augustino Lumori, acting provincial secretary of the Episcopal Church of Sudan and an international guest of convention, adding that continued support is important so that the church can continue to prosper.

The Episcopal Church’s long-standing support for Sudan is manifested through its partnerships and companion diocese relationships, programs supported by Episcopal Relief & Development, and advocacy work of the Washington, D.C.-based Office of Government Relations, which is rooted in General Convention resolutions.

The Episcopal Church of Sudan, home to 2 million Episcopalians, has 31 dioceses — 26 of them in South Sudan where it is one of the nation’s largest non-government organizations and has played a role in reconciliation in the aftermath of a two-decades-long civil war fought largely between the Arab and Muslim north and rebels in the Christian-animist south.

In 2005, the warring parties — the north’s Khartoum-based Government of Sudan and the south’s Sudan People’s Liberation Movement — signed a Comprehensive Peace Agreement (CPA), ending the civil war that killed more than 2 million people and displaced an estimated 7 million more.

In January 2011, as specified in the CPA, a plebiscite was held allowing residents of what was then southern Sudan to decide whether to stay a unified country or become an independent nation. Six months later on July 9, 2011, the Republic of South Sudan was born.

“The church is still one, we have not been split,” said John Bior, development officer in the Diocese of Bor in the eastern South Sudan state of Jonglei, where post-independence, inner-ethnic violence has killed some 900 people from the end of 2011 into February of this year.

(The United Nations Mission in South Sudan has faulted the South Sudanese Government for not being able to protect civilians in Jonglei state.)

The government of South Sudan is basically broke, because it hasn’t received any oil revenue and the fledgling country is almost without infrastructure, said Bior, who is attending General Convention along with others from the Diocese of Bor as guests of its companion, the Diocese of Indianapolis.

Among other things, the CPA called for equal oil revenue sharing between north and south; fair demarcation of north-south boundaries; and resolution citizenship issues, all of which remain unresolved. Christians living in the north have faced continued violence and persecution.

“There was war and we just came out,” said Atong Chaw in the Sudanese dialect Dinka, as interpreted by Bior. “There is a lot of poverty, and when there is poverty there is nothing. There are a lot of needs and wants.

“Women and children are suffering,” she said, adding that many men died fighting the war. “[Women] are left to take care of everything.”

As secretary of the Mothers’ Union in the Diocese of Bor, Chaw is working to establish a women’s center to provided education and training and childcare.

Women, both Chaw and Bior said, need to be educated about HIV/AIDS and negative cultural practices. For instance, they said if a woman’s husband dies his brother inherits the wife. If the husband died of HIV/AIDS and the wife is also a carrier, the brother, and subsequently his other wives, may also become infected.

Bor Town, the county seat of Bor and where the diocese is located, the town and the church are struggling with the large number of rural South Sudanese, who escaping the violence, have fled to the city.

“Ninety to 95 percent of the population in Bor County is Christian,” said Bior, adding the first thing the villagers do upon arriving in Bor is find the church.

During a July 4 open hearing of the National and International Concerns Committee held at the Downtown Marriott, Richard Parkins, the executive editor of the American Friends of the Episcopal Church in Sudan testified that AFRECS described the situation as an “unparalleled humanitarian disaster,” and recognized the role the Episcopal Church of Sudan has played in reconciliation, and the importance of the U.S.-based Episcopal Church’s continued support for the church in Sudan.

The Episcopal Public Policy Network in May issued an action alert asking its members to contact their congress members in support of the Sudan Peace, Security and Accountability Act of 2012, which calls for the “development of a comprehensive strategy to end serious human rights violations in Sudan,” and also for an investment in agriculture.

Meghan Johnson, a visitor from the Diocese of Minnesota and an Episcopal Peace Fellowship young adult representative, gave impassioned, tearful testimony during the July 4 hearing imploring the Episcopal Church to continue its support for peace in Sudan.

“If we want to live up to our Baptismal Covenant,” she said. “This has to be something that we advocate for.”

Johnson also expressed frustration at the American public’s limited awareness of the humanitarian crisis that continues in Sudan, a crisis dating back to the 2003 war in Darfur, where hundreds of thousands of people were killed and more than 2 million displaced.

In 2005, as a freshman in high school in De Pere, Wisconsin, Johnson often wore a “Save Darfur” T-shirt and started an awareness campaign aimed at educating her classmates, she said in a July 5 interview with Episcopal News Service.

She couldn’t remember, she said, exactly how Darfur got on her radar, but once it did, she became impassioned.

At the very least, she said, the Episcopal Church should support international efforts promoting peace in Sudan.

“I don’t want our support to be a prayer,” Johnson said. “That’s not enough.”

— Lynette Wilson is a reporter/editor for Episcopal News Service.