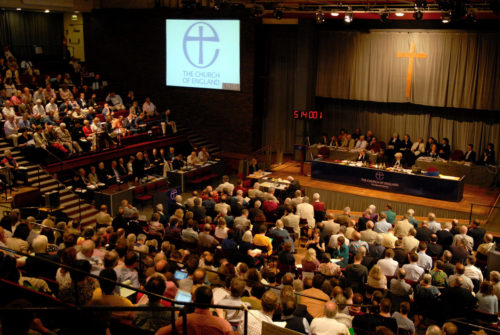 [Church Times] The General Synod has voted to send the draft women-bishops Measure back to the House of Bishops, and not to vote on final approval until November.

An adjournment motion, moved by the Bishop of Dover, the Rt Revd Trevor Willmott, was carried by a two-thirds majority, after about two and a half hours of debate. 288 voted in favour, 144 voted against, 15 abstained.

Shortly after the vote, the Archbishop of York told the Synod that the House of Bishops will meet on 12 and 13 September to review the amendment. The Synod will meet in November to vote on final approval.

Moving the final-approval motion, before the adjournment motion was moved, the Bishop of Manchester, the Rt Revd Nigel McCulloch, said that the difficulties with the legislation “centre on a dilemma which is easy to state but far harder to resolve.

“On the one hand, there is a clear majority view across the Church of England that the ministry of women priests has greatly enriched our life over the past two decades and that all orders of ministry should now be open to women and men equally, without clarification or equivocation.At the same time, there remains a strong desire to be faithful to our heritage as a broad Church open to all who assent to our historic formularies.”

Moving the adjournment motion, Bishop Willmott told Synod members that the steering committee had advised the House of Bishops not to amend the legislation, but insisted that the proposal to adjourn the debate was not made “from any sense of pique or frustration.

“It is no part of our desire to set our own judgement over against that of the House of Bishops or to call into question the right of the House of Bishops to take the decision that they did.But the plain fact is that the amendment has caused widespread dismay among many of those who have supported the Measure up till now, including a large number of the Church’s senior female clergy. Many who have previously voted for the Measure have now said that they could no longer vote for it in its present form.”

He acknowledged that the Bishops would need to “weigh very carefully” the impact that removing or amending the new clause would have on those “for whom it was a welcome acknowledgment of their own position” and suggested that a revised illustrative Code of Practice should be published alongside revised draft legislation.

In a ten-minute contribution to the debate on the adjournment motion, the Archbishop of Canterbury sought to explain “what was in the minds of the House of Bishops” when it voted for the “controversial” 5(1)(c) amendment. This action came, he said from the “very deep desire” of the “overwhelming majority” that the Measure should be carried “confidently”.

Dr Williams said that the bishops had diagnosed “unfinished business”. They were not convinced that it would be carried. This was not because they had been “got at”, but because of their reading of their own diocesan situations and the views of their diocesan representatives at Synod.

There was a danger that the Measure could be seen as accommodating “sheer prejudice” or “unthinking conservatism”, which would be “offensive to women at least as profoundly as what has been suggested as an amendment”.

Bishops had “underrated” the sense of hurt and offence caused by the amendments, and would need to “examine themselves” and “feel appropriate penitence that they did not recognise that”.

Dr Williams warned, however, that an adjournment was “not a panacea” and should not be seen as “squaring off to the House of Bishops”, but was an opportunity, and, “although it might sound a bit over-optimistic”, perhaps an adjournment “might be good for us”. It was an “opportunity to do something better”.He didn’t feel, himself, “convinced that we were wrong in the wording we selected”; but that was “a conviction that needs to be tested and discussed”.

The Second Church Estates Commissioner, Sir Tony Baldry, gave Synod a warning. He said that there was “no way that I am going to be able to explain to the [House of] Commons that when this Church had voted by 42 dioceses to two, that it was not possible for the Synod to manage to develop a Measure which commands the support of the whole Synod; and in particular commands the support of those who campaign for such a Measure.”

He said that Parliamentarians were familiar with the concept of “ping-pong” when the Commons and Lords could not agree, and suggested that during an adjournment “the usual channels” should “use the space and time to resolve the outstanding differences”.