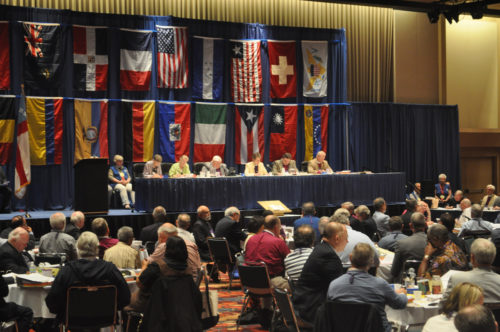 The day included some tense moments as well as a few lighter ones and more than an hour of conversation as bishops voted 111-41 with three abstentions for Resolution A049, authorizing the use of liturgical resources for blessing same-gender relationships. Shortly afterwards, bishops also voted 108-13 by roll call for Resolution B016, setting diocesan giving at 15 percent for the triennium. The measures now move to the House of Deputies for consideration.

Bishop John Bauerschmidt of Tennessee  requested the roll call vote before urging bishops to defeat the resolution. “It is reasonable to believe that vowed fidelity that is exclusive and lifelong to one other person is predicated on sexual difference,” he said. “This liturgy that is proposed does not have the basis in scripture, tradition or reason for us to authorize its use.”

The resource would authorize the liturgy for provisional use and call upon the Standing Commission on Liturgy and Music (SCLM) to conduct a review process over the next triennium.

“That will mean different things in different locales,” Bishop Thomas Ely of Vermont said when discussing the resolution. “There is a place in this process for every Episcopalian regardless of their level of support for the material. Read it. Reflect upon it. Use it, but please don’t ignore it.”

Bishop Edward Little of Northern Indiana urged a no vote because the resolution would “put the Episcopal Church out of the Christian mainstream. The Christian world is going to understand us as having changed the nature of the sacrament of holy matrimony,” he said. “The Christian world will look at that liturgy world and see vows, and exchange of rings, a pronouncement and a blessing and they will understand that to mean the Episcopal Church has endorsed same-sex marriage and changed a basic Christian doctrine. I do not believe that we are free to do that.”

But Bishop Nathan Baxter of Central Pennsylvania called the bishops to “theological, pastoral and canonical inclusion” and to keep going a conversation that has been more than 40 years in the making.

The pastoral character of the liturgy allows us “to respect the differences we have in our diocese and continue the conversation and to be strong in our mission and witness to accept that there are many religions and political neighbors who strongly disagree and in my case many, many African American pastors are upset with me (about this issue) but I really believe this is God’s call to us to continue the conversation as we go forward.”

Bishop Bill Love of Albany noted that in all likelihood the 77th General Convention will reject the Anglican covenant and reduce giving, constituting along with A049 a “triple whammy” to the Anglican Communion from the Episcopal Church.

But Bishop Leo Frade of Southeast Florida evoked laughter and applause from both bishops and members of the crowded gallery when responding to an assertion that passage of the legislation would drive Hispanics and Latinos from the church.

Bishops also voted by roll call for Resolution B016, which had been referred back to the committee for more work.

Bishop Stephen Lane of Maine said he was happy to see the bill reappear. “As a result of testimony we heard we are presenting a budget with a 19-percent asking through the upcoming triennium,” he said. “But we recognize the need across the church to look at this issue and think this resolution motivates us to have that conversation and gives us three years to prepare to do so.”

But Steven Miller of Milwaukee said he didn’t think he could vote for the measure because “I believe it is contrary to our polity. I cannot commit the Diocese of Milwaukee without an action of convention to pay for something and I don’t believe any other bishops in this house can,” he said.

Conversations were tense earlier in the day when Bishop Gene Robinson of New Hampshire prevailed upon the house for “a point of personal privilege”.

Robinson said that nine years ago to the day, and again today, false allegations had circulated about him. Nine years ago the allegations surfaced before his confirmation hearings. On July 8, he received information about other mischaracterizations, one day after the bishops spent extended time in private conversations about reconciliation.

“Last night I received an e-mail from (Bishop) John Howe (of the Diocese of Central Florida) saying that he had been contacted by two bishops of this house, saying that I had said on the floor of this house that I had no intention of reading the communication from the nine bishops that we have been discussing,” he said.

“It was either a lie on those two bishops’ part – the purpose of which I cannot imagine, and I cannot understand how that builds up the body of Christ – or it was something that I said that was misconstrued, and I want to be very clear that I have read every word communicated to us since arriving here at convention and I took it seriously and it helped me understand where those bishops were coming from,” Robinson told the house.

He also received an email from someone claiming to be a correspondent for VirtueOnline, asking for a comment about “relationship problems” between him and his partner Mark.

After bearing for nine years “a level of scrutiny the likes of which I believe most of you can only imagine,” he told the bishops “there is a limit to what one person can bear. And to think that while we were discussing reconciliation yesterday, two of you were emailing Bishop Howe to mischaracterize or lie about what I had or had not said on this floor wounds me deeply. I believe that I have treated every one of you and maybe even especially those of you who have disagreed with me with nothing but honor and respect and I have listened to you every time you have wanted to speak to me. And most of you have listened when I have spoken to you.”

In other business, Jefferts Schori announced the nominations of Bishops Michael Milliken of Western Kansas, Mary Glasspool of Los Angeles and Scott Mayer of Northwest Texas to the court of review, the Episcopal Church’s highest ecclesiastical court. The nominations were accepted by acclamation.

On a lighter note, Jefferts Schori informed the house about an article in “The “General Convent-Onion (where) apparently I’m being presented for substituting the word earth for world in a collect. The SCLM is filing Title IV proceedings. I commend this to you. It also says that 815 has moved to the matrix and that wifi is not available.”