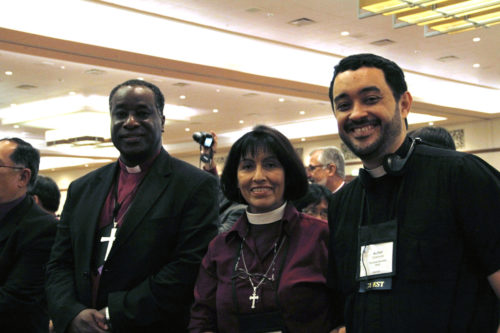 [Episcopal News Service – Indianapolis] Representing more than half of the Anglican Communion’s 38 provinces, and many ecumenical and interreligious partners, guests attending General Convention spoke of their gratitude for the Episcopal Church’s hospitality as they gained a deeper understanding of its polity and legislative processes.

Bishop William Mchombo of Eastern Zambia, provincial secretary of the Church of the Province of Central Africa, is attending General Convention for the first time. He described the Episcopal Church’s legislative processes as “unique” and “very complex,” but said that he is impressed by the background, detail and hard work that inform the discussions.

“The final product comes from all the people,” he said, citing convention’s “careful deliberations” and noting that nobody can say they have been left out of the conversation. “We need to include everyone so that they have ownership” of the decisions taken at General Convention, he said.

Addressing the media on July 8, Presiding Bishop Katharine Jefferts Schori said that including international, interfaith and ecumenical guests at General Convention is a “wonderful reminder of how we are connected across boundaries.”

“When we learn from one another, we seek ways of working that we might not have expected,” she said. “We are learning what it means to be present in contexts that are unfamiliar and it’s one of the biggest challenges that we face right now.”

The more than 40 international guests include many of the Anglican Communion’s primates, bishops and provincial secretaries, along with their spouses, from provinces throughout Africa, Asia, Europe, the Middle East, North America, Oceania, the Pacific, and Central and South America.

Many were invited and hosted by the presiding bishop’s office, in partnership with the Church Pension Group. Others came as guests of President of the House of Deputies Bonnie Anderson and church-affiliated groups such as the Chicago Consultation.

Jenny Te Paa, dean of Te Rau Kahikatea (College of St. John the Evangelist) in Auckland, New Zealand, was invited by Anderson to serve as guest chaplain to the House of Deputies.

Te Paa described the invitation as a “real honor,” and the experience as “mutually enriching all the way.”

A delegation of Sudanese Episcopalians from the Diocese of Bor is attending at the invitation of their companion Diocese of Indianapolis, which is hosting the 77th General Convention.

“It is important to help leaders from the other parts of the Anglican Communion to understand who we are as a church and how we come to decisions,” the Rev. Chuck Robertson, canon to the presiding bishop, told ENS. “But it’s also important for us to learn from them.”

Mchombo said that, “despite our differences, there is a desire by many to continue to work together.” He was encouraged by the House of Bishops’ desire to continue the church’s financial support of the Anglican Communion Office’s operating budget, which had been reduced in draft budgets being considered at General Convention.

The Rev. Paul Feheley, principal secretary to Archbishop Fred Hiltz of the Anglican Church of Canada, said that he sensed a mood of “helpful tension” at this General Convention, his third. “Instead of issues coming from the outside, there’s a tension within on structure and budget,” he said. “I’m hoping that tension might lead to creativity.”

Basing a budget on the Five Marks of Mission is helpful, he said, because “it is something communion-wide that we can agree on.”

Bishop Francisco Xico Silva of Southwestern Brazil said the Anglican Communion “is taking new steps towards strengthening companionships by focusing on horizontal rather than vertical relationships.” Of General Convention, he said that the international guests feel very welcomed and that it has been a “deep, spiritual experience.”

Robertson, who has coordinated much of the international visitors program, upheld the work of the “shepherds,” who have “hosted the guests and been ambassadors for the Episcopal Church,” under the leadership of the Rev. Sam Smith from the Diocese of New York.

The Evangelical Lutheran Church in America and the Moravian Church, two of the Episcopal Church’s full-communion partners, also sent leaders to represent their denominations at convention.

“We have only begun to imagine the possibilities that come by virtue of our full-communion relationship,” said Hanson, speaking earlier in the week to the legislative committee on ecumenical relations.

“Together, we can achieve things on a scale and scope we could never do otherwise,” he said, addressing Resolution A036 that gives thanks for the Episcopal-Lutheran full-communion relationship and asks that new mission and ministry opportunities be explored among the two churches.

“In a culture that too often fears diversity, regarding it as cause for division and distrust and suspects unity to mean the demand for uniformity, we together have the opportunity to witness to God’s gift of unity within diversity,” Hanson added. “We are churches deeply rooted in Scripture, with our own theological traditions and distinctive histories, and we are always being made new.”

More importantly, she added, “we are so aware that these guests are not just outsiders but they are also partners in the work of the common mission. Outside General Convention we work together on everything from conversations around doctrine, and common worship to engagement in common advocacy and common ecumenical projects.”

At a dinner honoring the ecumenical and interreligious guests, Dr. Sayyid Syeed, director of interfaith and community alliances for the Islamic Society of North America, suggested to the presiding bishop that their two conventions should “get married.” He explained that the ISNA’s annual conference, which gathers 30 to 40 thousand Muslims for family workshops and celebrations, does not include much legislation. He suggested that the Episcopal Church might enjoy such a family gathering a little more and that the ISNA could learn something about legislation. Jefferts Schori repeated this story when the guests were introduced in the House of Bishops, Rose said.

Another important reason to welcome the guests “is the realization that we are not alone in our various dealings,” said Rose. “Our Christian counterparts and one rabbi even said: ‘If I closed my eyes, I might not know this was an Episcopal gathering.’ We are all dealing with many of the same issues and it is good to share both the joys and the struggles.”

The ecumenical, inter-religious and international visitors devoted one day to a field trip to experience the programs and local ministry of the Episcopal Diocese of Indianapolis. “We wanted to expose them to what our church is doing on the ground,” Robertson said.

“It’s important to realize we’re members of a larger family, to renew relationships and to enjoy the diversity of the Episcopal Church,” said Anglican Church of Mexico Archbishop Carlos Touche-Porter, who is visiting General Convention for the fourth time as a bishop. “Being a family is about being in conversation, not about being in agreement.”

Touche-Porter said that at past conventions he spent much of his time in the House of Bishops, but in Indianapolis he has found the opportunity to experience a broad diversity of the events that mark the church’s triennial gathering.

Many of the guests said they were impressed with the size and structure of General Convention, whose legislative body is composed of about 845 deputies and more than 280 bishops.

Touche-Porter said that he feels General Convention can be overloaded with resolutions. Almost 400 resolutions are being considered by the 77th General Convention in Indianapolis. By comparison, Touche-Porter said his own General Synod, as in all other Anglican Communion provinces, is a unicameral body in which bishops, clergy and laity sit together as one house. His synod is composed of 60 members and meets for two days every three years.

Te Paa, discussing her role as House of Deputies chaplain, said the deputies realize how important it is to have a moment in their day when they “can simply be fed.” As a lay person, Te Paa told ENS that she feels that she offers “a very special diet” born out of her experience as a teacher, as a mother and grandmother, and as a lifelong woman of faith.

She has been using the New Zealand prayer book to lead the house in prayer and offer a reflection each day. “I am trying to imagine a large family dinner and what the elder would say before the meal,” she said. “They’d just say something that is gathering, honoring and calming and appreciated. I’ve tried to use those principals. Certainly, I haven’t tried to be theologically sophisticated.”

On one day she said that she talked about the omnipresence of God and “how important it is for us not simply to be sensing God, but looking toward God more intently in order that we might hear what God is saying to us.” She said she sees God everywhere in the House of Deputies and that there is a “tremendous yearning … amongst all of those present to get it right.”

Te Paa said it’s extremely helpful for the guests to witness the bicameral polity at work.

But for Te Paa, the highlight at convention is the liturgy. “No one does it as beautifully as the Episcopal Church,” she said, acknowledging the diversity of cultural and ethnic expressions that feed the church’s liturgical hunger. “You’ve just got the whole world going on here.”

— Matthew Davies is an editor/reported of Episcopal News Service.