[Episcopal Church Office of Public Affairs] The following sermon was presented today at the 77th General Convention of the Episcopal Church, meeting in Indianapolis IN through July 12.

We Need Some Crazy Christians

by the Rt. Rev. Michael B. Curry

This day we are commemorating the witness of Harriet Beecher Stowe, a woman who used her words to set the captive free.  I’ll say more about her later, but right now I want to note that in 1944 her witness was celebrated in a Broadway play titled Harriet. It was Helen Hayes who played the part of Harriet Beecher Stowe. At the end of the play Beecher Stowe’s family stands around Harriet and sings the words of “The Battle Hymn of the Republic,” affirming the Christian witness of this brave and bold woman.  Part of the hymn goes like this:[1]

For a text today, I offer these words from Mark 3:19-2: “Then [Jesus] went home; and the crowd came together again, so that they could not even eat. When his family heard it, they went out to restrain him, for people were saying, ‘He has gone out of his mind.’”

The King James Version of the Bible translates the concern of Jesus’ family for him in these words: “He is beside himself.” The old J.B. Phillips New Testament translates it, “People were saying, ‘He must be mad!’” But my favorite is from the 1995 Contemporary English Version which says, “When Jesus’ family heard what he was doing, they thought he was crazy and went to get him under control.”

So, forgive me for saying it this way, but Jesus was, and is, crazy! And those who would follow him, those who would be his disciples, those who would live as and be the people of the Way, are called and summoned and challenged to be just as crazy as Jesus. So I want to speak on the subject, “We Need Some Crazy Christians.”

I don’t want to be too quick to judge Jesus’ mother and the whole family. They had good reason to be concerned.  We just read from 1 Peter a teaching that reflects what Jesus taught in the Sermon on the Mount: “Do not repay evil for evil or abuse for abuse; but, on the contrary, repay with a blessing” (1Peter 3:9). That’s crazy.  In the Gospel reading from Matthew, read just a few moments ago, Jesus says, “The greatest among you will be your servant” (Mt. 23:11). That’s crazy. 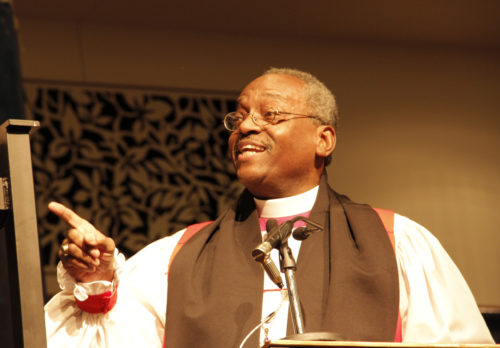 Let me suggest one example of such a call from the New Testament: Mary of Magdala, Mary Magdalene.  For whatever reason, Mary often gets a bum rap.

Think back to the crucifixion of Jesus. Crucifixion was execution by the Empire for crimes against the state. It was public torture.  It was an intentionally brutal means of capital punishment, an execution designed to send a message that revolution and revolutionaries would not be tolerated. If you were a supporter or follower of the person being crucified, it was dangerous to stand too close by during the execution. The rational and sensible thing to do was to go into hiding or exile.

Having said that, let’s call the roll of those Jesus called to follow him, let’s take the attendance of the apostles at the crucifixion of their Lord. Simon Peter? Absent. James? Absent. Andrew? Absent. Bartholomew? Absent. Thomas? Absent. Judas? Definitely absent. Mary Magdalene? Present and accounted for! That’s a disciple! When the old slaves sang, “Were you there when they crucified my Lord?” there was a woman named Mary who could answer, “I was there!” Now that’s crazy!

Now it may not be obvious at first, but we actually have a day to remember crazy Christians. I think we call it All Saints’ Day. It’s not called “All the Same Day,” it’s All Saints’ Day, because, though they were fallible and mortal, and sinners like the rest of us, when push came to shove the people we honor as saints marched to the beat of a different drummer.  In their lifetimes, they made a difference for the Kingdom of God. As you know, we are even working on a book to help us commemorate them. We are calling it Holy Women, Holy Men.  But we might as well call it The Chronicles of Crazy Christians.

One of the people we celebrate in the book is Harriet Beecher Stowe, a descendant of Mary Magdalene.   She was born in 1811 into a devout family committed to the Gospel of Jesus and to helping transform the world from the nightmare it often is into the dream God intends. She is best known for a fictional work titled Uncle Tom’s Cabin.  In this fiction, she told the truth. She told the story of how chattel slavery afflicted a family, afflicted real people. She told the truth of the brutality, the injustice, the inhumanity of the institution of chattel slavery. Her book did what YouTube videos of injustices and brutalities do today.  It went 19th-century viral.  It rallied abolitionists and enraged vested interests. The influence of that book was so powerful that Abraham Lincoln is reputed to have said, upon meeting Harriet Beecher Stowe for the first time, “So this is the little lady who started this great war!”[3]

A woman of her era was supposed to write nice stories, not stories that would disturb the conscience of a nation.  She was supposed to marry well, raise well-bred children, participate in a few charitable activities, and be fondly remembered by all who knew her. That was the life she was supposed to have.  But she had been raised in a family that believed that following Jesus means changing the world from the nightmare it often is into the dream that God intends. And sometimes that means marching to the beat of a different drummer. Sometimes that means caring when it is tempting to care less, or standing up when others sit down. Sometimes it means speaking up when others shut up. Sometimes it means being different – even being crazy.

When Steve Jobs, one of the founders of Apple Inc., died last year, an old Apple commercial from the 90’s went viral on YouTube. It was a commercial that aired in 1997 and that attempted to rebrand Apple products. The tag line for the commercial and the company was, Think different, a phrase that is grammatically incorrect, which is part of the point.

In the commercial they showed a collage of photographs and film footage of people who have invented and inspired, created and sacrificed to improve the world, to make a difference. They showed  Bob Dylan, Amelia Earhart, Frank Lloyd Wright, Maria Callas, Muhammad Ali, Martin Luther King, Jim Henson, Mother Teresa, Albert Einstein, Pablo Casals, Mahatma Gandhi, Albert Schweitzer, and on and on and on. As the images rolled by, a voice read this poem:

Here’s to the crazy ones. The misfits. The rebels.
The troublemakers. The round pegs in the square holes.
The ones who see things differently. They’re not fond of rules.
And they have no respect for the status quo.
You can quote them, disagree with them, glorify or vilify them.
About the only thing you can’t do is ignore them.
Because they change things.
They invent. They imagine. They heal. They explore.
They create. They inspire. They push the human race forward.
Maybe they have to be crazy.
How else can you stare at an empty canvas and see a work of art?
Or sit in silence and hear a song that’s never been written?
Or gaze at a red planet and see a laboratory on wheels?
While some see them as the crazy ones, we see genius.
Because the people who are crazy enough to think
they can change the world,
are the ones who do.

In the beauty of the lilies, Christ was born across the sea,
With a glory in his bosom, that transfigured you and me:
As he died to make men holy, let us die to make men free,
While God is marching on.
Glory, glory hallelujah,
God’s truth is marching on.