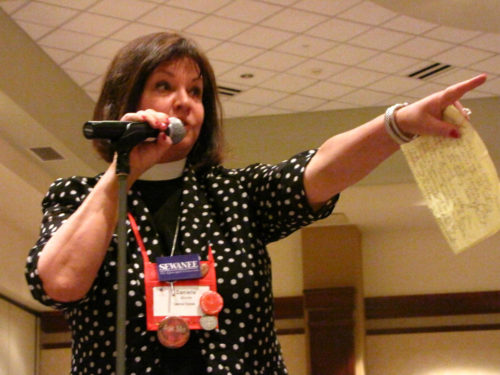 Those testifying alternated between proponents and opponents of the resolution, but supporters outnumbered opponents, at least six of whom came from the Diocese of Central Florida.

At the evening’s end, Prayer Book, Liturgy and Church Music Committee bishop Chair George Wayne Smith, bishop of the Diocese of Missouri, commended the speakers. “There was a sense of mutual respect. I’m grateful for that, and I hope we can move forward with that same understanding that we are all of us part of one body, and we are all a part of life in Christ.”

“I am an out and proud young gay man, and I am a Christian. That’s an impossible concept for many people to get their heads around because for so much of the church’s history the terms gay and Christian have been mutually exclusive,” he said.

He described gay and lesbian young people who “know that the Spirit is calling them into a deeper experience of Christ” but who have “been told time and again that God hates them. So many gay people feel like they’re being forced to make a choice: They can have their place in their church, or they can have their identity.”

He urged General Convention to pass the resolution to show “that they do in fact have a place in God’s home.”

Later, the Rev. Danielle Morris of the Diocese of Central Florida began her testimony by addressing York: “You are okay. Jesus loves you, and I would be proud to have you in my church.”

But she went on to urge defeat for the resolution, whose passage she said would endanger the lives of Christians in predominantly Muslim countries. “We know people who live in terror of our decision. … Let us sacrifice not the blood of new martyrs but our own personal desires, all for the good and betterment of the world.”

“When beliefs create a culture of death … beliefs need to change,” he said.

The Rev. Carola von Wrangel, deputy from the Convocation of Episcopal Churches in Europe, spoke against the resolution, urging the church to wait for discussion of the theology of marriage. “I believe that we are stepping ahead of where we are supposed to be.”

Several speakers told personal stories of their own or friends’ relationships, blessings and marriages.

“I don’t feel like we’re moving so quickly,” said Marcia Ledford of the Diocese of Michigan. She described her nearly 30-year relationship with her partner and how, when they held a commitment ceremony at a parish in 1992, “we had protesters and threats, death threats for our cleric and our bishop.”

The church needs the resolution to pass “because we need to be pastoral for our people within the church,” she said. “We need to send a message outside that this is not some kind of curiosity. This is not some kind of bizarre anomaly. This is about people. I take out the garbage and mow the grass, and Linda does the laundry and cooks. … We pay our taxes. We do everything that a couple does.”

The Rev. Dennis Parker, alternate deputy of the Diocese of Oregon, said he and his partner had waited 15 years. “We have made a conscious choice to not celebrate [our] union in front of anyone until my church is willing to bless that relationship.”

Should the resolution pass, he predicted, “my bishop has something to do on Saturday morning when we leave.”