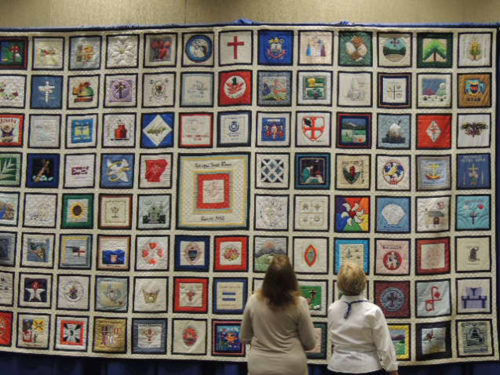 Triennial delegates inspect a quilt with squares representing the dioceses of the Episcopal Church. Triennial is the meeting of Episcopal Church Women that runs concurrently with General Convention.

[Triennial Today] In a day marked by anticipation and celebration, church women and board members and delegates from nine church provinces gathered (285 members in the voting delegation, and 89 dioceses are in attendance), the 47th Triennial Meeting of the Episcopal Church Women (ECW) was called to order by ECW National President Marcia Himes.

The theme of this ECW Triennial Meeting, “Many Paths, One Journey,” was celebrated in hymns, led by musician Adam Graham; prayers of thanks and gratitude, and a spiritually inspirational presentation by the Rev. Debora Jennings, Triennial Meeting chaplain.

One of the most highly-anticipated events of the day was Presiding Bishop Katharine Jefferts Schori’s arrival, and participation in the traditional ECW cross-blessing ceremony. The presiding bishop offered a prayer, then blessed and personally dispensed commemorative crosses into the hands of each attendee.

During the first plenary, the Rt. Rev Catherine Waynick, bishop of the Diocese of Indianapolis (host city of the Triennial meeting) welcomed attendees from around the country to the opening ceremonies. Waynick expressed her gratitude for ECW, saying that she was “very grateful” for the organization, and for its role in helping to create a series of “firsts for women” in the Episcopal Church. She made reference to early ECW women “who were tough … in the most feminine way.”

Additionally, she also spoke to the works of the United Thank Offering (UTO), and her belief that the organization “can lead us into being faithful, which leads us into generosity–which is so important to grow.” Waynick lends credence to the anthropological theory that the women in a culture keep religious faith alive. “However,” she said, “we need new ways to communicate and discern what is shifting and then in what needs to take place. It will require us to be honest, fervent, and disciplined in faith.”

Indianapolis ECW co-presidents Charlene Watson and Lisa Matucheski also greeted the assembly, providing a summary of their outreach and communication support for women. The team also provided an overview of their support of national and local ECW service projects.

After the business of roll call, introductions, and adoptions of standing rules and programs, keynote speaker the Rev. Lindsay Hardin Freeman took the podium. The author of The Scarlet Cord: Conversations With God’s Chosen Women ended the day’s plenary with a wise, insightful, and humorous offering of a woman’s perspective of the seven days of creation.