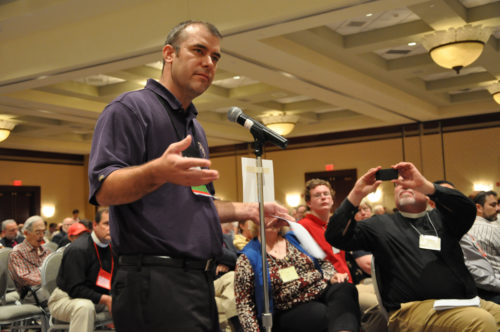 The Standing Commission on the Structure of the Church is the right body to coordinate the Episcopal Church’s effort to change the way it is organized, the Rev. Morgan Allen, a deputy from Texas and vice chair of that commission, tells members of the General Convention’s legislative committee on structure during a hearing July 5. ENS photo/Mary Frances Schjonberg

[Episcopal News Service – Indianapolis, Ind.] General Convention’s Committee on Structure formed a subcommittee July 6 to draft a resolution to substitute for a plethora of existing ones calling for structural change in the Episcopal Church.

The action came the morning after an evening hearing during which bishops, deputies and visitors told the committee that the church was in the middle of what some of them called an emergency that prevents it from doing the mission work of spreading the gospel in the world.

The committee spent an hour July 6 discussing what it heard during the hearing. Members said they were impressed by the passion and commitment of those who spoke but said the testimony offered “a paucity of ideas” about specifics, in the words of the Rev. Michael Barlowe, deputy from California.

Deputy Judith Conley of Arizona said, “People don’t know exactly what they want but are asking for change, something different.”

In response, a writing subcommittee was appointed, with a first draft of proposed legislation to be presented at the committee’s July 7 morning meeting. The goal, according to deputy chair the Rev. Gay Jennings of Ohio, is to have the committee’s proposals finished by July 8.

During the July 5 hearing, with each witness speaking for two minutes, and the hearing lasting just more than 90 minutes, the testimony was short on the specifics about the nature of the emergency and what changes each would like to see made in the church’s structure in response. There were repeated calls for putting “everything on the table.”

Diocese of Northwestern Pennsylvania Bishop Sean Rowe led off the testimony insisting that “the church structure as it is now is on the verge of imploding.”

“We don’t need out-of-the-box thinking,” he said. “We need to proclaim that there is no box.”

Close to an hour later, Joan Geiszler-Ludlum, deputy from East Carolina, objected to that sort of characterization. “Let’s stop thinking and saying our church is broken. Our church is not broken,” she said. “We have in place structures and concepts and values that have served us well for more than 100 years … many of the parts and values still work and remain important to our Episcopal identity.

She called for a six-year process that would begin with spending the first three years focusing on the church’s theology and vision, and then working on its infrastructure.

“Anything else will have us building a bridge to nowhere rather than a bridge to a new, alive Episcopal Church,” she said.

Atlanta Bishop Neil Alexander warned that “we can’t have any idols, we can’t have any sacred cows” while deciding how to develop “a new structure and a new approach to doing mission in the 21st century.”

“I believe that every baptized person, ordained or not, shares in the governance of the church, but we’ve also frankly got some idolatry, I believe, around some of our structures and I think it’s time we put them all on the table and gave them a really hard look,” he said.

Lynn Schmissrauter, chair of the East Tennessee deputation, said her diocese is “longing for a different, joyful, life-giving, energizing, nimble, courageous, aerodynamic structure for our church.” But, she said, if something is tried and it fails, “we’re not going to get all wadded up about it.”

“The tomb is empty and we want to behave like a church that really believes that and allows some gifted people to propose some courageous changes in pursuit of the risen Lord,” she said. 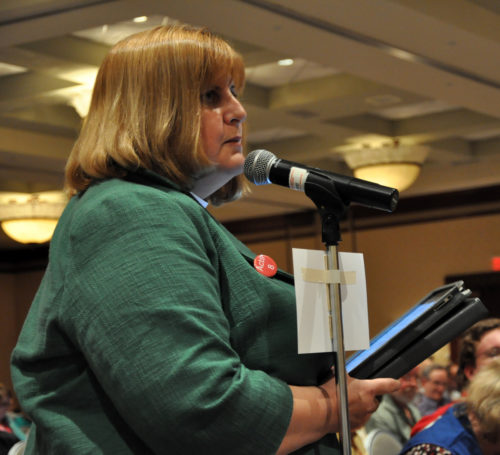 “It is sometimes a challenge for people who are deeply involved in current structures to change them, the Rev. Susan Snook, an Arizona deputy, tells members of the General Convention’s legislative committee on structure during a hearing July 5. ENS photo/Mary Frances Schjonberg

The July 5 hearing technically covered 51 separate resolutions, 46 of them from dioceses. Most of the diocesan resolutions are based on a model resolution suggested to the House of Bishops in September by Bishop Stacy Sauls, a member of the house who is also the church’s chief operating officer.

The model resolution would have convention call for a special commission appointed by the presiding bishop and the president of the House of Deputies to present, possibly to a special meeting of General Convention before the 78th General Convention in 2015, “a plan to the church for reforming its structures, governance, administration, and staff to facilitate this church’s faithful engagement in Christ’s mission….”

One resolution, C057 (available here) from the Diocese of San Diego, would amend Article XII of the church constitution to allow for a constitutional convention that could approve and immediately enact other constitutional changes.

The Rev. Michael Russell, a San Diego deputy, said a constitutional convention is needed because the other models “are just going to be an opportunity to recycle the same old things by folks who are already well-embedded in the system.”

He suggested, instead, that the church needed a “reboot” so that it can more widely incorporate mission work being done by “people in the pews and at the grassroots.” A constitution convention would be a way “to bring all the issues that we have with the constitutional, the canons, the Book of Common Prayer, all those pieces and get everybody at the table who wants to discuss making change in the church.”

The Rev. Morgan Allen, a deputy from Texas and vice chair of the Standing Commission on the Structure of the Church, was on the other end of the spectrum of how to structure a church-wide debate on structure. The structure commission’s combined membership of lay, clergy and bishops makes it “suitably situated to respond to the concerns and energy of this convention to change the way that we order ourselves,” according to Allen.

“A special convention, a special council, a special commission is an extra step and while it is being made in the effort to become more nimble, I suggest it will actually impair this process,” Allen said. He added that he is concerned about “semi-spurious change” being proposed through only marginally canonical means and “extra canonical methods being used to effect canonical change.”