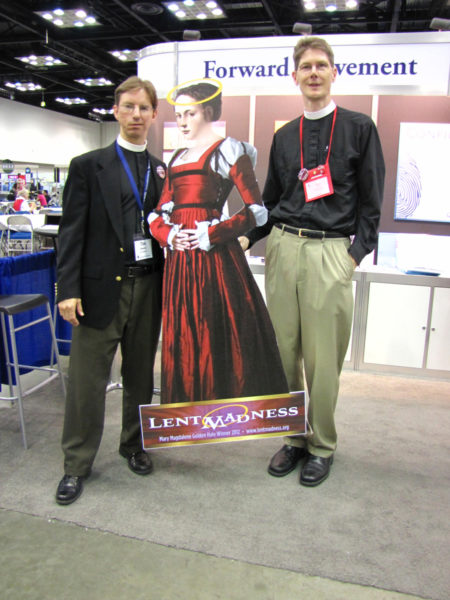 [Episcopal News Service — Indianapolis] For the Rev. Diana Wilcox, the invitation to pose with Mary Magdalene at the Forward Movement booth in the General Convention exhibit hall was irresistible.

“You know, I’ve always wanted to meet her,” said the transitional deacon from the Diocese of Newark, stopping to pose with the first witness to the Resurrection — well, a cardboard cutout of her in medieval garb. “She’s just such a rocking woman!”

“People always say she’s shorter than they expected,” said the Rev. Tim Schenck, rector of St. John the Evangelist Episcopal Church in Hingham, Massachusetts. Questioned by another visitor about her not-so-biblical garb, he reassured: “We did an archeological dig, and we determined that she was precisely this height and wore precisely these clothes. If you look closely you can see a nard stain.”

The saint’s advent on July 6 marked Lent Madness Day, a moment of levity when the Lent Madness “supreme executive committee”– aka Schenck and the Rev. Scott Gunn — introduced the 2013 bracket for the annual online contest, modeled after basketball’s March Madness tournament, with participants voting among pairs of saints in successive elimination rounds to choose the winner of the coveted “golden halo.”

“Today, in honor of Lent Madness, every bishop is wearing purple,” said Gunn.

Visitors were invited to pose with Mary, last year’s halo winner; check out the matchups for next year’s contest; and vote for Gregory of Nyssa or Gregory the Great to enter the bracket in a new feature of the contest. This was the first of three “play-in rounds” to determine the last four entries in the brackets.

“This is the most important vote of General Convention,” Gunn said.

Schenck started the saint-vs-saint online competition on his blog in 2010. The idea caught on, and the madness spread to include celebrity bloggers and, this year, its own website and Facebook fan page and a partnership with Forward Movement, where Gunn is executive director.

It’s a fun contest with a serious purpose, educating people about the saints and involving people of all ages, Schenck said. “It’s a unique blend of fun and learning, and it’s also become a true online community. We get hundreds of comments.”

“It’s a devotion that lets the church show that we take our faith but not ourselves too seriously,” he added. 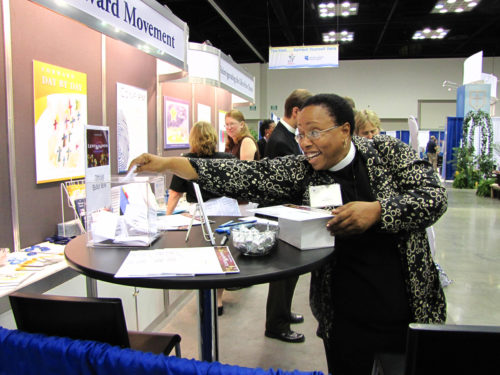 The Rev. Cheryl Parris casts her vote for one of the Gregorys. Photo/Sharon Sheridan

The contest got her confirmation students interested in the saints, studying their biographies each Sunday to prepare for casting their votes during the week. It educated them about the saints, many of whom they’d never heard of, but also showed them why it’s important to remember them, she said.

This year’s contest introduces the possibility of a “hanging Chad” (Chad of Litchfield) and includes play-in round face-offs between musicians (Thomas Tallis vs. John Merbecke), poets (John Donne vs. T.S. Eliot) and seminary founders (Samuel Seabury vs. George Berkeley).

Not everyone approved the choices they’d have to make in Lent.

“You didn’t do that!” Wilcox protested.

“That’s the cruelty of the madness of Lent Madness,” Schenck replied.

Wilcox predicted Oscar Romero vs. Macrina the Younger for the final matchup for the golden halo.

“We should start a band: Macrina and the Waves,” Schenck suggested.

“Lent just wouldn’t be fun without you guys,” Wilcox said.

Exiting the booth, she bade farewell to the cardboard Mary. “I’ll catch you later, hun!”