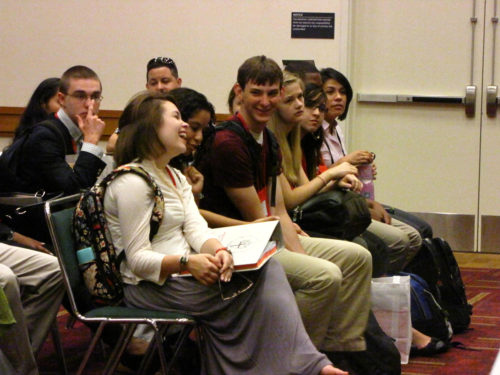 [Episcopal New Service — Indianapolis] When Caroline Christie attended the 2009 General Convention with a group of other high school students from the Episcopal Diocese of Newark, she didn’t know what to expect.

“I was just going because my friends were going,” she said. “I didn’t know that the Episcopal Church was so big, and everything that they did. It was a really eye-opening experience.”

And it whetted her appetite for more. Christie is back for the 77th General Convention, a lay deputy elected at age 17 to represent the Newark diocese along with Gibson Oakley, who was 16 when he was elected in January 2011.

Electing two young deputies in one diocese is “unusual but not unique,” said the Rev. Canon Gregory Straub, executive officer and secretary of convention.

Most deputies are older. This year 12 are younger than 25, and 20 are ages 25 to 34, said House of Deputies President Bonnie Anderson. 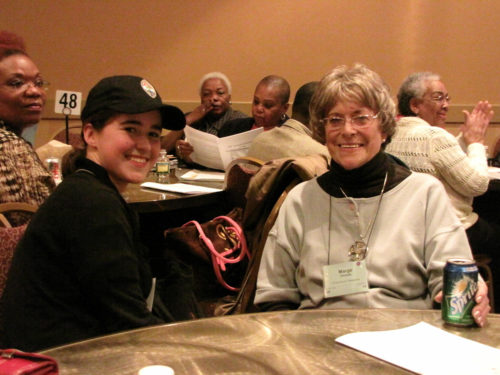 Caroline Christie of the Diocese of Newark will attend her first General Convention as a deputy with her grandmother, first alternate deputy Marge Christie, a deputy or alternate since 1976. Photo/Sharon Sheridan

But young adults are a steady and visible presence at General Convention, from young deputies to members of the Episcopal Church Official Youth Presence to the Episcopal Peace Fellowship Young Adult Presence to groups of young people attending from individual dioceses.

Many young deputies first experience General Convention as part of the official youth presence, composed of 18 young people — two per province — who have voice but no vote in the House of Deputies. Anderson wrote the resolution that created it in 1982.

“I don’t think there was as much awareness then as there is now about the necessity and desire and real hope to have more young people in the House of Deputies, because now young people are getting elected, whereas then a young person just wouldn’t get elected,” Anderson said. “That’s sort of what set the need for it.”

“I think now there’s a thirst in the dioceses — some of them, anyway — to elect younger deputies,” she said.

“There’s no doubt in my mind that especially in more recent years there has been an encouragement among dioceses for young people to run and for diocesan conventions to elect young deputies,” he said.

The Diocese of Chicago elected Ian Hallas, 22, as a first alternate deputy in 2006 and as a deputy for 2009 and 2012. The diocese is “very supportive” of youth, not as “being the future of the church, but actually being a present part of the church,” he said. He first visited General Convention in 2003 as an eighth-grader as part of an Episcopal Youth Event.

The legislative process “and the whole Robert’s Rules of Order” captured his attention. “I was really interested in the logistics of how the body comes together and operates and still gets things done with 850 or so elected deputies. … I enjoyed paying attention and seeing how things were constructed and how things came together.”

He first spoke on the House of Deputies floor at his deputation’s urging when Katharine Jefferts Schori was elected presiding bishop in 2006. “I have no idea what I said, but I was supporting her and I thought it was great,” he said. “It was pretty exhilarating, actually.”

In 2009, with the help of his diocese and the Chicago Consultation, he was among a limited number of speakers allowed to speak on a resolution to repeal the 2006 Resolution B033, widely seen as a de facto moratorium on the consecration of gay or lesbian bishops. “I was definitely the youngest person to say something,” said Hallas, who described it as “a defining moment for me in that house.”

In Newark, Christie and Oakley met with the rest of the diocesan deputation to prepare for convention. 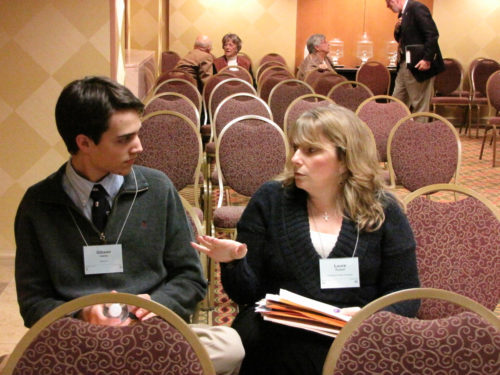 “I was actually shocked. We were treated just the same” as the other deputies, Christie said. “In my experience, when young people are appointed, it’s usually just to show that young people are there. I really did feel that we had a voice and we were there as actually members of the deputation and to speak and to have a purpose.”

At convention, she particularly will follow the work of the National and International Concerns Committee.

Liza Anderson, who just turned 30, followed the last two conventions closely and created and shared a summary of the Blue Book in preparation for this one, the first she’ll attend.

She was new to the Diocese of Connecticut when she was elected to serve as a deputy in Indianapolis.

“I think the only thing they knew was that I was a young female and a doctoral student at Yale,” she said. “I do think I was elected because I was young. In some ways, that’s frustrating.”

Being a member of a sparsely represented demographic also can create pressure. When young people speak, Liza Anderson said, “people want to interpret everything you say as speaking for all young adults. … We’re just as diverse as any other demographic.”

Megan Anderson of the Diocese of Northern California served as a deputy in 2009 and is co-leader of the Episcopal Peace Fellowship’s young adult presence in Indianapolis. She first visited convention via the Episcopal Youth Event in 2003 at age 15 and then was a member of the official youth presence in 2006. “I really did feel like I was taken seriously and listened to,” she said.

“A difficult entrance point, especially when you’re a part of these presences, is the tendency for people to see you as just another interest group,” she said “It takes a bit to move people to seeing a young person as something other than just a young person because we’re so rare. But once you kind of get over that initial hurdle, then people are people, and that’s just a part of my wonderful experiences.

Older deputies do listen carefully to the words of younger ones, Bonnie Anderson said. “I think they’re listened to because of the hope and expectation that the older deputies have that something new and exciting will come from them.”

Likewise, the house pays close attention to the official youth presence, she and Straub each said.

“The official youth presence has a tremendous amount of authority in the house,” she said. “The deputies pay a lot of attention to what they have to say.”

“I also invite them to choose two members of the youth presence to address the house, so they have an opportunity that the deputies don’t,” she said. “They’re very precious to the House of Deputies. And I also invited young people ages 18 to 30 to make 90-second videos that I’m going to show in the house during the lulls. The question is: What’s your dream for the future of the church?”

“If we think of the youth presence as like a diocese, no diocese is at the microphone more often than the youth presence,” he said. “I mean that in a positive way. They seem to be fearless. They don’t seem to be cowed by the fact that they’re addressing the House of Deputies, and they’re not afraid to ask questions or to express opinions. They use the position very well and often.”

For some, participation in the youth presence and then as a deputy leads to further leadership positions.

Bryan Krislock of Seattle learned about the youth presence at an Episcopal Youth Event and was appointed for the 2000 General Convention in Denver. He served as a deputy from the Diocese of Spokane in 2006 and 2009 and now is vice chair of the Government and Administration of Mission Committee as a member of Executive Council.

Thinking back to 2000, he said: “I didn’t know much about General Convention beforehand. I didn’t really know about the governance or the polity. The experience through the youth presence was really eye-opening. It made me want to come back and run for deputy and … put my name into the hat for executive council.”

Megan Anderson followed a similar path, from EYE in 2003 to youth presence to deputy and now to her role with the Episcopal Peace Fellowship, co-leading a young deputation with Jessie Vedanti. She also is secretary of the Standing Commission for Mission and Evangelism.

“Some of the [commission] members at first confided in me that they thought I was the token youth representative but came up to me after the first meeting and had to apologize and really say, ‘It’s just such a privilege to have you as a full member of the team.’ That moved me beyond belief,” she said. Serving on the commission has “been one of my favorite experiences thus far in the church.”

Anderson is entering her final year as a seminarian at Yale Divinity School.

Watching General Convention from a distance this time as he prepares to take the bar exam in a few weeks, Krislock had some advice for new young deputies:

“Don’t be afraid to put yourselves out there. Stand up and speak, share your opinions, but also listen and observe. … Listen and see what people are doing and try to learn how your voice can best be heard — kind of see where your opportunities are to make the biggest impact.”

And, he said, be willing to change your mind. His philosophy is to “never approach a meeting knowing how I’m going to vote or having my mind made up.”