[Episcopal Church Office of Public Affairs] The following sermon was presented today at the 77th General Convention of the Episcopal Church, meeting in Indianapolis, Indiana, through July 12.

This is not just an Episcopal Church gathering.  We’re here to represent the world of God’s creation, which Jesus came among us to redeem and sanctify.  We ARE here as Episcopalians from Taiwan, and Micronesia, and Haiti, several parts of North America, Central and South America, the Caribbean, and Europe.  We have Anglican, ecumenical, and interfaith guests from many parts of Asia, Africa, Europe and the British Isles, the Middle East, New Zealand, the Americas, as well as right here in Indianapolis. 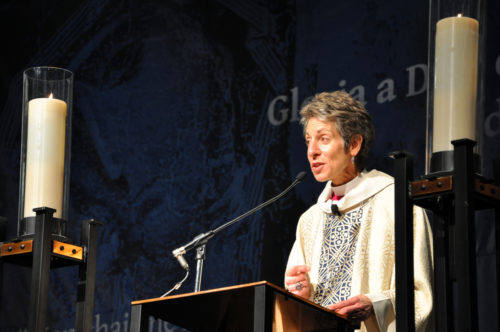 I am particularly thankful we have Evangelical Lutheran Church of America Presiding Bishop Mark Hanson and the Rev. Dr. Betsy Miller, President of the Provincial Elders’ Conference of Moravian Church Northern Province.
We are all here to make common cause for the healing of this world – of its many peoples and nations, as well as the rest of creation.  God’s dream of that healed world is what you heard Isaiah is talking about:  “My purpose shall stand, and I will fulfill my intention.”

Our ongoing challenge is to look beyond our own interests to God’s intent for this world.  That will continue to be our challenge until the end of all things, for there is nothing so characteristic of sin as the centrality of our own self-interest.  We will have repeated opportunities here to remember and to turn around.  We will have opportunities to reach beyond ourselves to neighbors here and far away.  The good gifts that we crave for ourselves and our own families are the same ones that God intends for all his children.  Deputies and bishops are elected to consider the common good, not just their own congregations or dioceses, or only this Church.

The saints we remember here are a reminder of that catholicity – some of them familiar, and some are new to many of us.  The three we celebrate today were activists for the kingdom of God in their own day.  Each one insisted, in his own way, that the reign of God was meant to be realized on earth as it is in heaven, and not just something anticipated after death.  Each of the three was born in the mid-19th century and died during the time of the First World War.  Together they did the hard work of theology, journalism, and advocacy for a more humane and more divine society on earth. 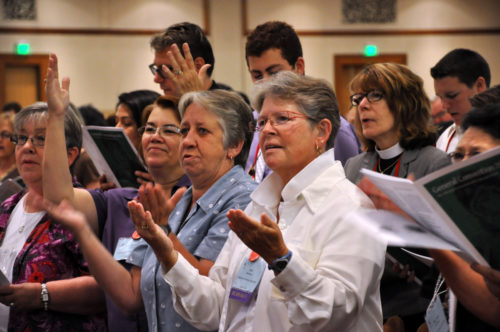 Walter Rauschenbusch was a New York, Baptist theologian who laid the foundation for what’s called the Social Gospel.  He didn’t mince words. He insisted that private sin begets social sin when he named six sources:  “Religious bigotry, the combination of graft and political power, the corruption of justice, the mob spirit… and mob action, militarism, and class contempt – every student of history will recognize that these sum up constitutional forces in the Kingdom of Evil.”[1]  He insisted that a historical tendency to substitute personal salvation for the kingdom of God meant that people “seek to save their own souls and are selfishly indifferent to the evangelization of the world.”  The good news to the world, in his eyes, was about the reign of God on this earth.

Washington Gladden was a Congregational minister and journalist in New York, and Pennsylvania, and Massachusetts, and for a brief time a city councilor in Columbus, Ohio.  He understood Christianity as “a religion that laid hold upon life, and proposed first and foremost, to realize the Kingdom of God in this world.”  He was the first cleric to stand up in favor of labor unions, and after he met WEB DuBois early in the 20th century, and saw some of the realities of African-American life in the South, he began to actively oppose segregation.  He exposed corruption in urban government, advocated public ownership of municipal resources, and is probably best remembered for a letter of denunciation that we wrote to his church’s mission board for accepting “tainted” money from a captain of industry.[2]

Jacob Riis was a Danish immigrant who arrived on these shores in 1870.  As an immigrant, he suffered poverty, discrimination, and exploitation, and eventually becoming a well-known journalist.  He wrote about and photographed the tenement life of poor New Yorkers, in a book called How the Other Half Lives.  He helped Teddy Roosevelt to clean up the New York Police Department. He also worked to clean up the New York City water system, being polluted by sewage upstream.  His anti-tenement work also led to the development of many small parks and gardens in New York City.

These three evangelists, proclaimers of the good news of the reign of God, insisted that it is meant to be realized and worked toward  in this life, as we pray so often, “on earth as it is in heaven.”  We still live in a world of corruption, bigotry and contempt toward many sorts and conditions of God’s people, and we retain a fondness for the use of force – what Rauschenbusch called militarism and mob behavior.

We have opportunities here in abundance to forswear those evils, to lay down our various weapons of division, and to work together for the commonweal of God’s created world.  Is our faith lively enough to do works toward that kind of abundant life?[3]  In everything we do here, remember those whom we serve, that we may do unto them as we would have done to us – for this is the law and the prophets, and indeed, this is the good news of the reign of God.