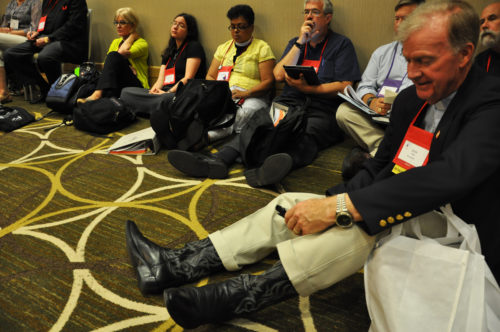 It was standing- and floor sitting-room only July 4 during a Joint Standing Committee on Program, Budget and Finance hearing. In the foreground, the Rev. Dr. Colin Kelly, Rio Grande deputy, foreground, checks his iPad. ENS photo/Mary Frances Schjonberg

Committee members said in their discussion and vote during their first meeting here on the morning of July 4 that they were choosing the “template” of the presiding bishop’s budget proposal, and not necessarily its figures.

PBF issued a statement later in the day saying the budget was chosen because “it provides a clear missionary framework for budgeting and is based on updated information regarding income” and that the decision came “without commitment to any of the specific line items” in the budget.

The alternative budget has a different structure than the draft proposed budget approved in January by the church’s Executive Council and given to PBF as required by church canon (in Canon I.4.6) and the General Convention’s Joint Rules (in II.10 10 (a)). It is structured around the Anglican Communion’s Five Marks of Mission, which the General Convention endorsed in 2009 (via Resolution D027) and said the church’s 2013-2015 budget ought to center on the marks as “strategic priorities.”

The Rev. Douglas Sparks, deputy from Minnesota, moved that the committee adopt the structure of the presiding bishop’s budget “without supporting any monies and any line items” in the proposal.

But, cautioned Diocese of Maine Bishop Steve Lane, PBF vice chair, “when the template comes, it’s not going to be full of zeroes; it’s going to have line items in it and then you are going to decide about those.”

However, the Rev. Canon Mally Lloyd, Massachusetts deputy, called for the template to be zeroed out because using the numbers from either budget “gives too much weight to that particular budget.”

Lane said zeroing out the numbers in each line item or either budget would greatly increase the work of the committee’s subsections that will work in detail on different sections of the budget “rather than looking at it and making adjustments.”

Sparks and others began referring to the template as the Five Marks of Mission budget during their debate.  And, because the presiding bishop’s decision to propose an alternative budget met with some objections, committee member William Fleener, deputy from Western  Michigan, encouraged his colleagues to “deflect some of the baggage that goes along with it” by referring to the budget as the Five Marks of Mission.

Committee member and Diocese of San Diego Bishop Jim Mathes said that by using the template the committee would provide a platform for describing the work of the Episcopal Church. He said “we need to be able to tell the story” in dioceses of “why we should take these precious resources [out of a diocese] and put them to work here” in a church-wide budget.

He called on PBF members to decide what would be included in the budget and then reorganize their decisions into the Five Marks of Mission framework of the presiding bishop’s budget.

“I’m concerned we’re letting too much baggage and lack of trust and the way this church has unfortunately been operated for a number of years to come into this process,” Oklahoma Bishop Ed Konieczny told his PBF colleagues. “We as a committee have an opportunity to set a different tone with the way we are going to do business.”

“Let’s forget about how we go those numbers. Let’s stop being distrustful of each other, that there’s some hidden agenda that somebody’s trying to take over the church, and let’s get down to the work of figuring out how we are going to be the church going into the future that’s about the mission of Jesus Christ, and not about a bunch of political garbage.” 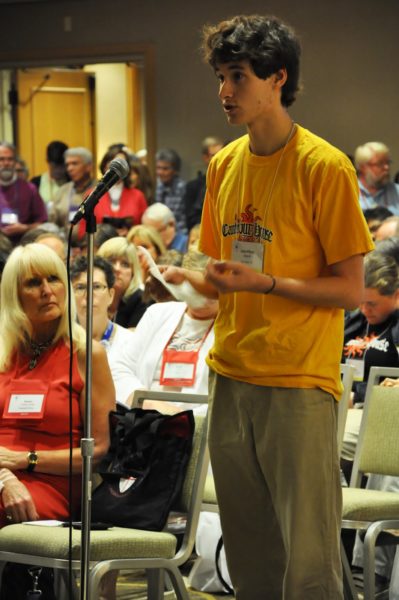 Later on July 4 the committee held hearings aimed at listening to members of the church discuss how the Five Marks of Mission apply to the programs they support. Many witnesses advocated the church investing in Christian formation and youth and young adult ministry.

“If we don’t support formation, there will be nobody left to have these other five goals of the budget because we have to form the people in our church,” Beth Ferguson, an alternate deputy from Utah, told the committee.

The Rev. Megan Castellan, Arizona deputy and a campus chaplain with the Northern Arizona University Canterbury Fellowship, told the committee that her ministry came as a result of the church’s investment in youth and young adult ministry.

“I’m 28 years old and I have been a priest for four years. That’s because a generation ago the Episcopal Church thought it necessary to have church-wide programs for people who were young adults,” she said.

“The gospel that we bring as Episcopalians, the Jesus that we know— the God that we know —  that loves everyone unconditionally and that will never let them go is something that this generation is crying out for,” she said. “Every penny that we take away from this mission field is a penny that could give a young person the hope that they need to carry on.”

On July 6 from 7:30 p.m. to 9:00 p.m. PBF will hold a hearing on funding the 2013-2015 budget and at the same time on July 7 the committee will hold its third and final hearing on the spending side of the budget. Both hearings are scheduled to be held in the Indianapolis Marriott Downtown.