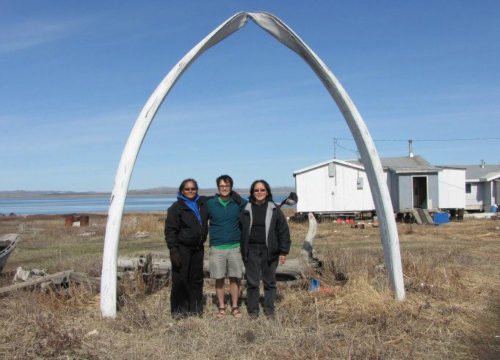 [Episcopal News Service] As forest fires rage across Colorado and unprecedented storms pummel the country from Florida to Minnesota, it’s pretty clear we are facing a “new normal.” It’s also increasingly obvious that climate change is not so much about future generations as it is about our most marginalized brothers and sisters, right here, right now.

This unfortunate truth is well known about one hundred miles above the Arctic Circle within the Iñupiaq community of Kivalina, Alaska, a village of 400 persons and home to the Kivalina Epiphany Church. “We’re an adaptable people, we’ve always been,” recalls Colleen Swan, who served as tribal administrator for 18 years, now sits on the Kivalina City Council, and serves as treasurer for Episcopal Church Women. “But since 2004 we just can’t adapt this fast.” That was the year when Kivalina started to experience rapid land failure—a story covered here by the Episcopal Digital Network, Wayfarer Project.

Perched atop a barrier island, the village sits between a freshwater lagoon to the east and the Chukchi Sea to the west. With sea ice forming later and later each year, Kivalina is washing away from seasonal fall storms. Flooding remains a terrifying risk and traditional hunting grounds are increasingly unreliable. But community leaders in Kivalina are determined not to become “climate refugees” and have chosen relocation over nonexistence.

The Rev. Enoch Adams Jr. chairs the Kivalina Relocation Planning Committee, which is tasked with moving the community so as to save his peoples’ place-based culture and human identity. “We get a lot of sympathy from a lot of people,” he told me, “but what we need is empathy.” With the construction of the first school in 1905, the federal government forced an autonomous and semi-nomadic society, the Kivalliñigmiut, to settle on what had been a summer hunting camp. Despite its role in the forced sedentarization and assimilation of Kivalina’s people, U.S. government support remains unavailable for climate-induced relocation projects.

As General Convention deputies, the Rev. Enoch Adams Jr. and Austin Swan Sr., a village elder, will carry the concerns of their people to Indianapolis. “It’s about time,” Enoch said, “we’ve been waiting for so long to find an ally and we couldn’t find it anywhere. Not in government agencies… in nobody at all. It’s the church, it’s really incumbent on the church, I think, to take the lead on this.”

In a few short days, the Episcopal Church will have an opportunity to do just that—to affirm our commitment to Kivalina and other environmentally vulnerable communities around the world. In faithfulness to the House of Bishops recent Pastoral Teaching on the environment and sent by their parish mission committee, the Kivalina deputation will introduce a resolution that asks the Episcopal Church to pledge its solidarity with “overburdened ‘frontline’ communities… already experiencing the impacts of climate change.”

But the proposed resolution goes one step further.

Seizing upon novel conditions, made possible only through global warming, Shell will begin offshore oil exploration in the Arctic later this month. The logic of “manifest destiny” embedded in our fossil fuel economy has carried Shell to the Chukchi Sea, threatening a critical food source and the migration routes of the bowhead whale, central to Kivalina’s Iñupiaq spirituality. The threats posed to culture, ecology, health—to human and ecological dignity—by the growth of an economy powered by fossil fuel are unspeakable.

In submitting this resolution, the members of Kivalina Epiphany Church were emboldened by the 2009 General Convention’s repudiation of the Doctrine of Discovery. “I’m glad the Doctrine of Discovery concept was struck down when it was,” Enoch stated. “It is like God told somebody to write this stuff down so that when we reach an issue like oil discovery up here, we have a means to help people understand where we’re coming from when we oppose oil exploration in our waters.”

At this year’s convention, the Kivalina deputation and their allies will do the world a great service when they ask the church to commit to the kind of transition we badly need. The resolution calls on the Episcopal Church to resist not only offshore oil extraction, but all forms of increasingly unconventional and destructive fossil fuel development: strip-mining for coal in Appalachia and the Intermountain West, tar-sands oil development in Canada and Utah and “fracking” for methane gas throughout the U.S.

For indigenous cultures throughout the world there is a direct link between the violence of colonial racism and an endlessly expanding fossil fuel economy. The Rev. Enoch Adams Jr. calls us to another way: “I saw this repudiation and I knew that God’s hand was on it. Now the church has got to give it backbone. People are going to have to sacrifice their way of thinking, to repent. If they want to see this, to understand this, to know where we’re coming from, they’re going to need to repent. That’s why I started pointing out the difference between sympathy and empathy. Sympathy requires nothing. I refuse to seek anybody’s sympathy. Come and live, come and see, take a look… live every day with the fear that what you’ve been using all your life could be gone. Something that you took for granted all your life, [and] all of a sudden its possible that it will not be there next year. And that’s the gravity of the situation, my friend. I just want to do God’s will.”

— The Rev. P. Joshua Griffin, priest Associate at St. David of Wales Episcopal Church in Portland, Oregon. “Griff” received his M.Div. from Harvard Divinity School in 2009 and is a doctoral student in cultural and environmental anthropology at the University of Washington. He previously served as the environmental justice missioner for the Diocese of California.