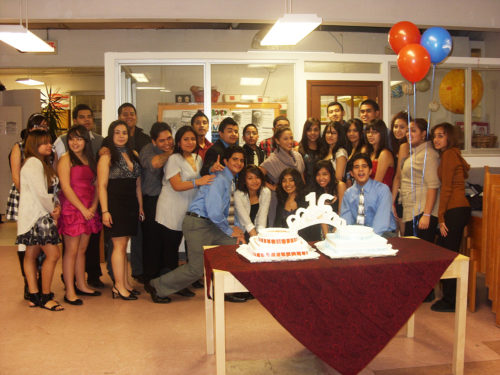 [Episcopal News Service] When identical twin brothers asked the Rev. Yamily Bass-Choate for a quinceañera-like ceremony for themselves a few years ago, a new liturgy, “Los Cumpleañeros,” was born.

With the twins’ input, Bass-Choate created a male version of the Latin American culture’s coming-of-age celebration for girls reaching their 15th birthday. After the 16th-birthday celebration for Raul and Guillermo Renderos, the new rite caught on quickly with teen-aged boys at San Andres Church in Yonkers, New York, she said.

“They want to be blessed going into the world, just like the girls,” Bass-Choate said during a June 18 telephone interview from her office.

“They come and talk to me. It’s a beautiful ceremony. We select the music, and the readings and there’s a big party afterwards; the teenagers love it.

“I think that’s what liturgy is all about, to glorify God in a way that is honoring our ancestors as we go forward in the Episcopal Church,” she said. “It tells them that, with us, they are who they are.”

Elsewhere, other communities of faith also are expressing culture and identity through creative approaches to liturgy.

An African processional offering in California

At least one Sunday a month ushers at Holy Faith Church in Inglewood, California, leave the collection plates at the front of the church and line up with other parishioners in the back.

They call what happens next the African processional offering and the whole body is involved. Drums are playing; the choirs are playing musical instruments.

“It starts in the back of the church. Some people take their pledge envelopes. Some take cash, whatever they have, and they process to the altar. They keep singing and dancing and worshiping,” said Patricia Amadi, a long-time church member.

“Back home in Nigeria we do it as a thanksgiving or a ceremonial service, when people bring a lot with them to church from their farm crops,” she added. “They go to the front and say, ‘this is what I’ve brought to you, what came from my garden, my house, to give to the glory of God.'”

It is one way the congregation — whose members are African American, Latino, and Anglo as well as hailing from various African, Caribbean and Central American countries — expresses its diversity, said the Rev. Altagracia Perez, rector.

“We’ve tried making consistent changes in the liturgy that reflect the variety of the cultures here” including bilingual services and experimenting with a range of music, from classical to reggae or jazz, even youth or intergenerational culture, she said during a recent telephone interview from her office.

On a recent Sunday that coincided with the 20th anniversary of the civil disturbance in Los Angeles, the youth created a tableaux inspired by the Rev. Martin Luther King’s sermon “Experiment in Love” about nonviolence.

The tableaux-as-sermon depicted scenes of anger and violence, things being taken away, as well as forgiveness. The congregation was given an opportunity to reflect and respond but “it threw off some visitors,” Perez said. “They expected something else and walked out.”

But Amadi likes the liturgical change-up when “it incorporates a little bit of how other countries worship,” especially the African processional, she said.

“I like it because sometimes people come to church and they’re not so much involved. But once you start playing the music, and praising and working your way up the altar, you just see them getting involved.”

Hawaiian song: ‘responding to the people of this land and sea’

Epiphany Church in Kaimuki and St. Andrew’s Cathedral are among the Honolulu congregations incorporating Ke Aoha A Ke Akua, a song written by Queen Lili’uokalani and known as the Queen’s Prayer, into weekly worship.

Sung in Hawaiian after the confession and before the absolution, it was composed during by the queen during her imprisonment at Iolani Palace by the Missionary party that overthrew the Hawaiian government, according to an explanation in Epiphany’s bulletin.

“She was referring to the illegal overthrow of the Hawaiian monarchy by U.S. business interests backed by the U.S. government,” according to the bulletin. “The values in her prayer of forgiveness, love, faith and hope exemplify the twin influences of ancient Hawaiian spirituality and Christian ethics through her Episcopal faith.”

For the Rev. Malcolm Chun, who serves at Church of the Holy Nativity in Honolulu, “it’s a good step, a very tiny baby step,” but adapting liturgies to local culture needs to go further.

Worshipping in the Hawaiian language is important “so people realize this is a whole service that responds to the people of this land and sea,” said Chun during a June 20 telephone interview.

“Many people have said, ‘I don’t understand the language but I love to hear it,’ … and that’s what it takes to change people,” added Chun, who holds a doctorate in indigenous studies and has written several books on Hawaiian culture.

He believes it will help evangelize and spread the message “that you have a host culture … that you are among people who have something to contribute but they don’t do it the way you do it. They need to be recognized because that’s one of the tenets of our church, to welcome the stranger.”

Without inculturated liturgies, he said, “people who are curious about the Episcopal Church come, sit in the back pew and you never see them again.” 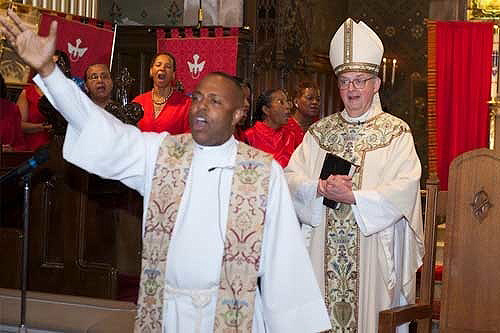 The Rev. Martini Shaw, rector of the African Episcopal Church of St. Thomas in Philadelphia extends an invitation to Christian discipleship during worship. Photo/St. Thomas’ Church

Philadelphia: ‘opening the doors of the church’

Some denominations describe it as an altar call but the Rev. Martini Shaw says it’s an invitation to Christian discipleship and he extends it every Sunday after he preaches at the African Episcopal Church of St. Thomas in Philadelphia.

The practice originated with the 19th century evangelical movement, but Shaw, rector of the historically African American congregation for about nine years, said he incorporated it weekly when perplexed visitors couldn’t figure out how to join the church.

“When you go to the Baptist, the African Methodist Episcopal, the Methodist Church, there’s an opportunity within the liturgy to come forward and join. The question was often asked of me how does a person join this church, there is no opportunity for a person publicly to profess their faith and join when he or she may have been moved by Scripture or the preached word or some musical expression,” he recalled during a recent telephone interview.

It’s “opening the doors of the church,” Shaw said. “It’s simply an invitation to anyone who is present who either wants a closer relationship with Christ or who doesn’t belong to a church to come forward.”

So far this year at least 50 people have accepted the invitation. When they come forward, Shaw inquires about their intention to join the faith community; vestry representatives meet with them, record personal information and even take a photo, which is placed on a new member bulletin board.

“They start new member classes and each person is assigned a shepherd to help their transition within the life of the church,” added Shaw. “If he or she is not baptized, or if they haven’t been confirmed, we prepare them for both.”

St. Thomas, founded by the Rev. Absalom Jones, the Episcopal Church’s first African American priest, is “an Anglocatholic, charismatic and Afrocentric” community with an average Sunday attendance of about 300, Shaw said.

“For us it’s a glorious time,” he added. “Usually when the person comes forward they are met with great applause by the congregation and usually several other people will come forward and stand with that person or persons.”

Funeral services at St. Mary’s Church, a historically Japanese American congregation in Los Angeles, include two separate ways to pay respects; a floral tribute on behalf of church groups and another final tribute for everyone attending.

Carolyn Morinishi has done both; often representing the Women of St. Mary’s she approaches the casket or urn after prayers for the deceased are offered. She reverences and places a flower on or beside it, reverences again, and then bows to grieving family members before returning to her seat.

The tradition is similar to those she has seen at other Japanese American and even Buddhist funerals. “I just went to a Buddhist funeral this past Saturday and they did the same thing,” she said during a June 20 telephone interview. “At that funeral, it was done with incense and they called it an incense offering. They approach the incense pot, take a pinch and place it in the incense burner, then bow to the family.

The other opportunity happens after the dismissal, as each person approaches the casket or urn, and in turn, bows to it and then to family members before greeting them on the way out of the church.

Funeral services may also include an offering from St. Mary’s Kotobuki Kai dancers, whose simple, smooth and graceful movements were adapted for church audiences from classical Japanese kabuki dance-theatre.

Morinishi, 52, began dancing at the church at age nine and now teaches under the professional name Kikusue Azuma, but said until recently that she didn’t think of it as liturgical dance. “It was just nice Japanese dance in church,” she said.

When the Rev. Anna Olson was installed as rector a few months ago, Morinishi and other dancers interpreted “Here I Am, Lord” during the celebration. Wearing traditional Japanese kimonos they matched movement to music in soulful, expressive ways. A lot happens in the head and hand movements, Morinishi said.

The performance included a subtext, as a four-year-old and two older girls danced before the altar. “Their movements indicated them teaching her, to illustrate the ‘let’s go serve’ theme of the song,” Morinishi said. Two older dancers illustrated the ‘finest bread I will provide’ lyrics in the second verse, executing hand over hand motions, graceful turns and pointing to the cross behind the altar.
When dancing “I feel happiness and joy inside that comes out through your face and fingers,” Morinishi said. “When I dance, I feel this joy inside of me and it’s hard to hide.”

‘Smudging’ and incense in Minnesota

The Rev. Robert Two Bulls, vicar of the All Saints Episcopal Indian Mission in Minneapolis, said he uses smoldering sage and sweetgrass as incense during worship in the traditional Native American practice known as “smudging.”

“It’s the same thing as censing. During our Eucharist when I’m getting ready to set the table is when I’ll usually smudge the elements and if I’m using inculturated liturgies I’ll have people smudge themselves with the sage and sweetgrass,” he said.

But he said that some elders “just want the plain liturgy out of the prayer book because they were taught to keep everything separate. That the traditional practices should be kept separate from what we do in church.”

But, he added, “To me, at the end of the day it’s all worshipping God. You use whatever it is to express that and I don’t think God would separate it all out.”

Ultimately, though, melding culture and liturgy can be a starting place, an open door into the church, he said.

“They’re all aids in worshiping God, our liturgy, our practices, and I think a lot of people right now that are disconnected from a lot of traditions are seeking some kind of connection,” he said. “And if we as a church can offer that, that’s good.”

— The Rev. Pat McCaughan is a correspondent with the Episcopal News Service. She is based in Los Angeles.