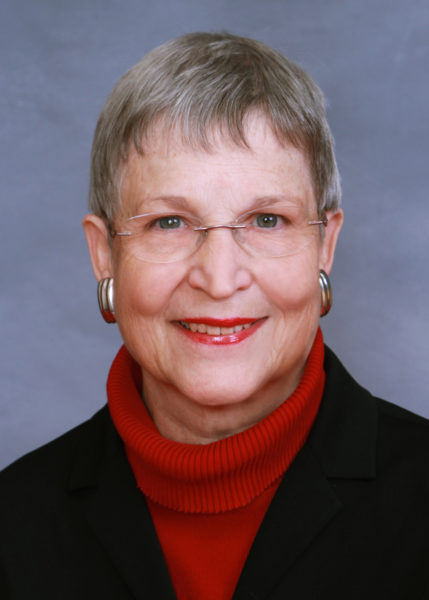 [Episcopal News Service] Martha Bedell Alexander, a trustee of the Church Pension Fund and a North Carolina state legislator, had announced that she will stand for election as president of the House of Deputies.

“I see it as a wonderful opportunity to serve God and His Church — and to make a difference,” Alexander, 72, said in a June 20 press release from the Diocese of North Carolina.

Saying the idea of her standing for election originated through conversations with others, Alexander added, “I gave the possibility of the nomination a lot of prayerful, thoughtful and careful consideration.”

Alexander is serving her tenth two-year term as a Democratic member of the North Carolina House of Representatives. She was first elected in 1992 and is standing for re-election on Nov. 6.

The election will take place during the 77th meeting of General Convention July 5-12 in Indianapolis, Indiana.

Alexander is the second candidate to announce her intention to stand for election. The Rev. Gay Clark Jennings, who just completed a six-year term on the Episcopal Church’s Executive Council, announced her plans on June 5.

The person elected will succeed Bonnie Anderson, who has served two three-year terms as House of Deputies president. Anderson announced May 23 that she would not ask convention to elect her to a third and final term as president.

Nominations from the House of Deputies floor for the office of president will open July 9. The deputies will host a “meet the nominees” gathering the evening of July 9 from 6:30 to 8:30 p.m. (the location to be announced). The election for president will take place on July 10.

A cradle Episcopalian, Alexander has served in a variety of roles throughout the church, as well as serving in a variety of organizations on a local, state and national level, according to the release.

In addition to serving on the Church Pension Fund board of trustees, Alexander is on the General Convention’s World Mission legislative committee for the upcoming session.

She is a member of the Diocese of North Carolina Standing Committee and is the companion diocese coordinator for the church’s Province IV. Alexander serves on the Botswana-North Carolina Companion Link Committee, chairs the dispatch of business for the diocesan convention and is a member of the Micah Initiative’s microfinance committee at Christ Church in Charlotte where she lives.

“I have had lots of responsibility over my lifetime on different committees and assignments throughout the church, and I bring a willingness to serve and work, a passion for social justice issues and a desire to ensure all people are welcome in this church,” Alexander said in the release.

Alexander lives in Charlotte and has two children and five grandchildren.

With more than 800 members, the General Convention is one of the largest legislative bodies in the world.

The president of the House of Deputies serves as vice president of the Executive Council and the Domestic and Foreign Missionary Society (the Episcopal Church’s corporate entity). The president presides over the House of Deputies at General Convention, appoints clergy and lay members of all the standing commissions and convention legislative committees, and performs many functions of liaison, development, and opportunity between conventions.

The position is unpaid, but in the 2010-2012 triennium General Convention provided a budget of nearly $589,000 to cover Anderson’s expenses, to compensate staff to assist her and to cover the costs of maintaining an advisory council, which the president appoints.

Meanwhile, the office of vice president has been vacant since Feb. 15, 2010, when Diocese of Minnesota Bishop Brian Prior, who had been vice president, was ordained bishop.

At the organizing session of the House of Deputies on July 5, the house will elect a vice president to serve at the 77th convention. Diocese of Eau Claire Deputy Scott Kirby has agreed to be nominated to serve as vice president, Anderson has said. Other persons may also be nominated from the floor. If Kirby is elected, he has indicated that he will not stand for election for any office for the next triennium.