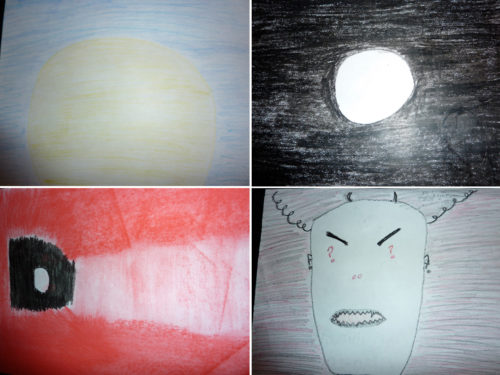 [The Episcopal News, Diocese of Los Angeles] Feeling beloved is a tough sell for “Serena,” 15, and the other students in the “Good Seed” classes taught by Episcopal nun Sr. Greta Ronningen at a California juvenile jail.

Their schoolwork says so.

Like Serena, whose series of colored pencil self-portraits depict “parts” of herself and also illuminate her inner battles:

A small white spot showing “God” inside a well of darkness, all of which is nearly swallowed up by bright red anger.

Another, of a demon she called “Rebelision,” is a derivative of rebellion and confusion, with question marks for eyes, jagged teeth in a mouth opened in rage, scary enough to evoke tears.

Enabling Serena and the other girls to connect with themselves, with one another and with God through art therapy, meditation, journaling, prayer and counseling are aims of Ronningen’s program, also called the “Peace Project.”

On May 14, at the urging of her classmates, Serena read from a poem she wrote and titled “Inner Demon”:

Dressed in prison issue black pants and gray T-shirts, Serena and five other girls who live in the special housing unit at Los Padrinos Juvenile Hall in Downey file into the classroom Ronnignen has carefully prepared. (The young women’s names have been changed to protect their identities).

Their laughter and good-natured banter belies deep hurts, troubled pasts, and overwhelming histories of victimization, abuse, violence. A total of 400 minors are in the facility awaiting trial on a variety of charges; 75 are girls.

This particular day, a Monday, Ronningen is teaching on the “sun side” of the unit, a pink building that houses older girls like Serena, ages 15 to 18, charged with serious felonies. The other, or “moon side,” houses younger girls facing less serious charges and is where she teaches on Wednesday afternoons.

Though minors, these girls are often labeled by society as monsters, but each was “wounded, hurt and abused” prior to arriving at the facility, Ronningen said. She is a former yoga instructor and business owner turned “subversive” Episcopal nun, who sees traces of herself in these girls, and hopes they can benefit from her own evolution.

Through a three-year grant from the Episcopal Church Foundation for transformational ministries, she is able to offer informational classes on stress, anger, forgiveness, power and control, abusive relationships and healing as well as teaching breathing, meditation and other coping skills. She also offers opportunities for Christian formation and faith-building, for deepening relationships with God.

“I usually start the class on healing by telling them that I was raped when I was 17 by my stepfather’s best friend,” Ronningen said. “That opens the door for a deeper level of sharing. One class, when I spoke about that, every girl sitting at the table — there were four of them — all four shared their experience of rape. Many tears were shed.”

But she adds: “In this environment, it’s tricky to be revealing. Some of these girls are in gangs; some live in neighborhoods that are in conflict with one another. I’m very careful about sharing, but when this came up, it was quite amazing. It helps them build compassion for each other, for the suffering they’ve gone through, and it was very powerful.”

The path to healing involves facing past demons and learning new ways of coping, Ronningen added. Her own experiences led her to “risky behavior and drugs and abuse and it prepared a fertile ground from which I do this ministry.”

She has served for nearly four years as a chaplain for Prism, the restorative justice ministry of the diocese, visiting inmates at the Twin Towers facility in downtown Los Angeles and other locations. She has also completed three units of clinical pastoral education and is working toward a master’s degree in spiritual formation at the Claremont School of Theology.

She is a founding member of the Community of Divine Love, an Episcopal religious order in the Benedictine tradition, in San Gabriel. She had founded the two largest yoga businesses in the United States and continues to teach yoga, including breathing and meditation classes, to cancer patients at City of Hope Hospital in Duarte.

This particular Monday, 15-year-old Christina wanted to stay after class to talk. “There’s a lot of anger in me I wish would be out,” she tells Ronningen, worried that she will spend yet another birthday in jail. She has essentially been on her own since she was nine years old and was arrested at 14 and charged with murder, she says.

She isn’t sure how she got to Los Padrinos. “I never did drugs, didn’t drink, I always went to school, I didn’t get into trouble, how am I here?” she says. “I feel like this is a bad dream. I don’t want to be here. I want to be free and with my family, not waking up with strangers, eating at a precise time, lights off at a certain time, with time limits on the phone, my mail is opened, wearing these clothes.

“I keep thinking about all the other stuff I could be doing.”

Ronningen interjects: “Take a deep breath and get some perspective,” she says. “You are here and you can use this time …

“… to be productive,” Christina finishes the sentence. “I have faith,” she concludes. “I hope God has my back. He knows what’s in my heart, who I am, that I don’t want to do bad, that I’m just waiting and ready to go home. I have a lot of hopes that the Peace Project is helping me see what’s truly there.”

“I love this,” Ronningen said of her ministry at Los Padrinos. “There’s such a need. There’s such a huge hunger. I just want more people to actually join us. People who have volunteered with Prism just love it.

“People who are incarcerated are so hungry,” she said. “They’re so humbled by this brokenness in their lives, by this crisis that there’s an opportunity to bring this nutrient-dense word of God into their lives.”

Recently, she was asked to be the godmother for one of her students.

Destiny, 15, grew up in Compton. Fresh-faced, soft-voiced, shy, she rakes her hand through her shoulder-length hair as she describes first connecting with Ronningen seven months ago.

That was after she graduated from “Level 3 … when they say you want to kill yourself or somebody else.”

Ronningen’s revelations about her own experience of rape struck a chord with Destiny, also a victim of sexual abuse. She soaked up all the Good Seed classes she could, repeating the lessons aloud.

“What got me was how we can breathe, try different types of breathing, and learning about anger issues and calming ourselves down, to think before we act,” she said.

She has learned a great deal, she said, especially about forgiveness and redemption. She hopes to someday work in a hospital, conducting sonograms for expectant mothers. “It represents a new life, new children from God. A healthy life.”

“When the holy water was poured on my forehead, I wanted to cry, but I didn’t,” she said of her baptism. “It felt like a new beginning, like I was God’s child.”

“I know my life will never be perfect,” she added, “but I will try to maintain the ten commandments from this day forward.”

She wants people to know, she said, that whatever the circumstance or situation “whether you’re being abused or bullied, whatever things people do to put you down or see you sad, don’t believe what they’re saying. Love your life.”

Destiny, Ronningen said, “is so beautiful, she has hope, she’s such a bright light, she has such a tender heart, having suffered so much. We’ve talked about the idea that she would someday be of great inspiration and hope to others who also suffer.