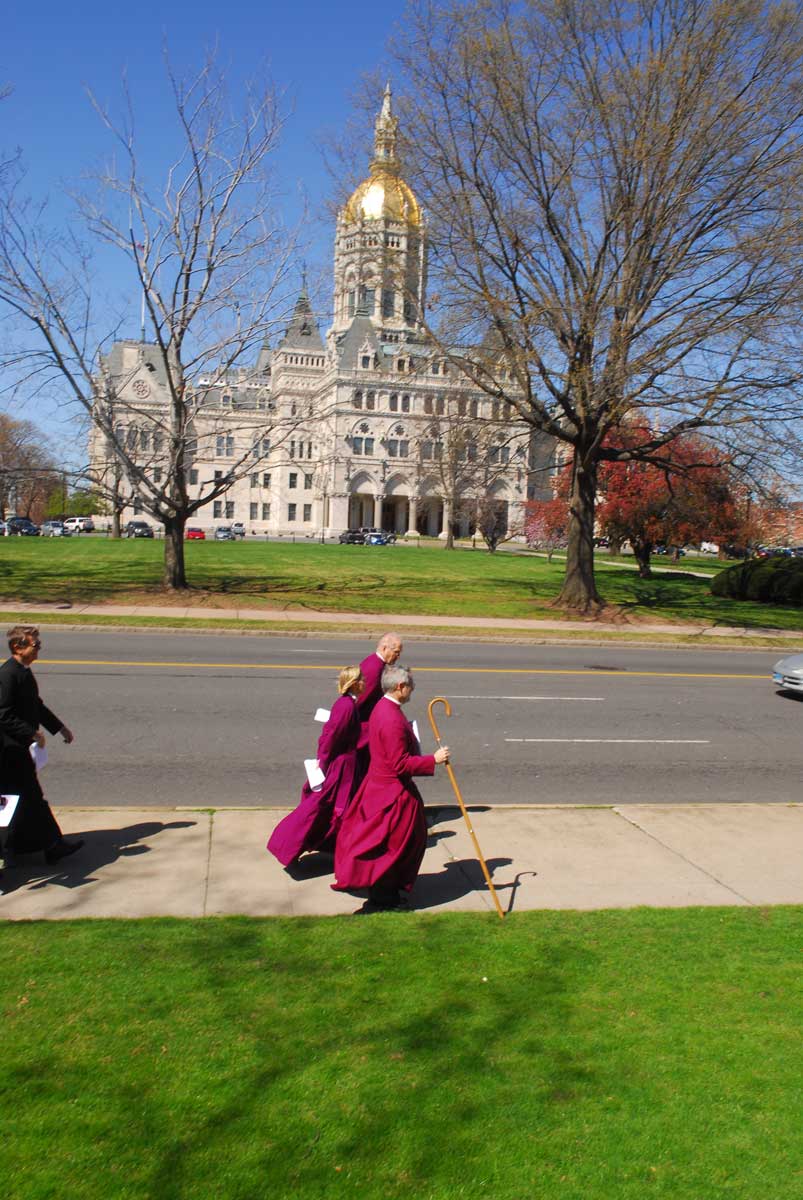 [Episcopal News Service] When Gov. Dannel Malloy signed a bill in April making Connecticut the fifth state in five years to abolish the death penalty, Episcopal Diocese of Connecticut Bishop Suffragan James Curry’s attendance at the ceremony testified to the influence of Episcopal leaders on ending capital punishment in the state.

Curry and other members of the diocese had worked with the Connecticut Network to Abolish the Death Penalty since the 2005 execution of serial killer Michael Ross, the first prisoner put to death in New England in 45 years.

Abolishing the death penalty became “a very, very contentious issue” in Connecticut after two recently released prisoners invaded a home and “brutally murdered” two girls and their mother in 2007, he said.

“In the midst of that, it was very hard to have a conversation in this state about not demanding the death penalty for such horrific crimes,” Curry said. “It was also a time in the church where we started to shift the conversation from that this is punishment to [that] the death penalty is really about the kind of statement we want to make about what we want our society to be.”

The Episcopal Church officially has opposed the death penalty for more than half a century, and its advocacy is gaining traction as momentum builds across the country to end capital punishment. Bishops and other church leaders are writing letters, joining coalitions, testifying before legislators and publicly demonstrating their opposition to the death penalty.

Seventeen states and the District of Columbia have ended capital punishment. In total, 3,189 people remain on death row in the United States, including some in Connecticut and New Mexico, which repealed the penalty without making it retroactive, according to the Death Penalty Information Center.

The Episcopal Church first passed a resolution opposing the death penalty in 1958, said Alexander Baumgarten, Episcopal Church director of government relations. “It’s been reaffirmed in multiple conventions since then, so our position as a church has been clear for a long time.

“I think the fact that we’ve seen a recent pattern of bishops and other leaders in the church in the dioceses of the United States raising the profile of our advocacy is a reflection of the climate in which public opinion in the United States seems to be moving against the death penalty for the first time in a number of years.”

A 2011 Gallup poll showed about one in three Americans opposing the death penalty, a 19 percent drop in support for capital punishment over 17 years and down from an all-time high of 80 percent supporting it in 1994. Baumgarten attributes the trend to an understanding of “the inherent flaws in the application of the death penalty.”

Repeated studies, for example, have documented that capital punishment does not deter crime, he said. The death penalty also carries inherent racial and socio-economic biases and the chance of killing innocent people, he said.

According to the Death Penalty Information Center:

“As people start to understand the complexities of how the penalty is applied in practice,” Baumgarten said, “I think we start to see people who on its face might not be opposed to the death penalty now start to say: As a matter of applied justice in this country, this doesn’t really work.”

While the Episcopal Church has an official stance against the death penalty, this primarily is a state issue, and church abolition efforts have originated mostly at the local level, noted Baumgarten, who works in the church’s Washington, D.C., office.

In Connecticut, the diocese worked with the Connecticut Network to Abolish the Death Penalty on legislative efforts that fell short more than once before the governor signed the April 25 bill abolishing the death penalty in the state. Then-Gov. M. Jodi Rell vetoed a bill in 2009. A 2011 abolition bill failed by two votes in the state Senate.

The 2012 bill ended the death penalty, but not for those previously convicted – including the two men sentenced to death for the high-profile 2007 murders.

During the push for the successful abolition legislation, the Connecticut network helped organize conversations in churches around the death penalty, he said. “We started organizing letter-writing campaigns to state representatives and senators. We made ourselves available for conversation. We were lobbying at the legislative office building.”

The diocese’s public witness included inviting clergy to renew their vows during Holy Week this year while participating in a Stations of the Cross service that meditated on issues of justice in society and particularly on abolishing the death penalty. Between 175 and 200 people participated, mostly Episcopal priests but also some clergy from other denominations, Curry said. “We had one rabbi join us … It speaks to the power of this issue and the power of the coalition, because the very language of our Stations of the Cross was unsettling to him.”

While they walked in prayer, the last senator needed to pass the abolition bill held a press conference saying she had changed her mind after opposing similar legislation last year, Curry said. The church made a difference in the bill’s passage, he said, from the letter writing to the image of three Episcopal bishops and numerous clergy in their cassocks processing through the state capital.

“For me, the other reality is that the church learned that we have the possibility to affect public discourse by staying true to who we are and by creating alliances with other groups like the Connecticut Network to Abolish the Death Penalty, and that’s a learning that were going to keep as we’re looking into social justice,” said Curry. ” We need to always keep looking beyond ourselves, outside of ourselves for other voices that we can ally with.”

In the Diocese of Montana, Bishop C. Franklin Brookhart Jr. belongs to the Montana Abolition Coalition, an umbrella group of religious and other organizations seeking to end the state’s death penalty. He has written editorials and letters to legislators opposing the death penalty and testified before a state Senate committee.

“It’s difficult in some ways because, in doing this, you have to speak to people with a broad range of ethical and religious backgrounds,” he said. “It’s easiest for me simply to speak as a Christian.”

“I think we have to say that there is no question from the Scriptures that the state has – the traditional phrase is ‘the power of the sword’ — to do this, but is it in this day and age really a Christian witness to say let’s kill people? I don’t think it is.”

Like Curry, he believes the church’s witness makes a difference.

“I believe there is power in being a bishop and speaking on behalf of the church. I know I get listened to more carefully because of that,” he said, adding, “The other side is, I think that for some people it is easier to dismiss me: Well, what would you expect a soft-headed Christian to say?”

The Montana legislature meets for 90 days every two years, and death penalty abolition is an issue every session, he said. “It nearly got through last time.”

“Every time it comes up … the idea of the death penalty seems to have less power and appeal to it, and it will come up again this time when the legislature meets in January 2013,” he predicted.

Episcopal leaders advocate against the death penalty in other states as well.

In 2008, at an anti-death-penalty rally in Annapolis, Sutton said, “There is no room for state-sponsored killing and state-sponsored revenge. To kill and to revenge for the killing of another person contributes to a cycle of killing. … Love is doing what is right precisely when it is hard. Jesus taught his disciples to go beyond an ‘eye for an eye’ and ‘a tooth for a tooth,’ for that would inevitably lead to what Dr. Martin Luther King Jr. and others would call an ‘eyeless and a toothless society.’ Instead, he taught us to love even the unlovely and stop the cycle of violence.”

In the Diocese of Los Angeles, Bishop J. Jon Bruno and Bishops Suffragan Mary Douglas Glasspool and Diane Jardine Bruce endorsed the SAFE California Act, which will replace the state’s death penalty with a sentence of life in prison without chance of parole as the maximum punishment for murder.

Helping to recruit signers in the successful petition drive to get the initiative on California’s November 2012 ballot were the diocesan Program Group on Peace and Justice Ministries, the diocesan PRISM Restorative Justice Ministries and All Saints Church, Pasadena, and St. Michael and All Angels Church, Studio City, among other congregations, said Robert Williams, diocesan canon for community relations.

In the Diocese of Ohio, the Rev. Will Mebane, canon for Trinity Cathedral in Cleveland, testified in February before the Senate Judiciary Committee to support a bill to abolish the death penalty.

In Kansas, Episcopal and other bishops have participated in letter-writing campaigns and other efforts encouraging abolition of the death penalty.

Such efforts are consistent with the church’s mission, Baumgarten said.

“If we look at the catechism in the prayer book,” he said, “it tells us that the church lives out its mission as it prays and worships, proclaims the gospel and promotes justice, peace and love.”

“As Episcopalians, as Anglicans, we would understand the promotion of just structures in society and peace in God’s kingdom on earth as something that is central to the mission of the church, not a distraction from the mission of the church,” he said. “We would be remiss if we did not look at what our faith says about justice and peace and then work for it in the world around us.”

“Our biblical witness is about transforming the world, and it’s not about hoarding the good news of God’s redemptive love,” he said. “I think that we have to be out in the world and that one of the primary reasons for church community is to equip every single Christian to take that faith out in their own lives. So I have great respect for legislators who are living out their faith or social workers or organizers. It’s almost counterintuitive that clergy would feel they can’t do that.”

Church polity allows Episcopalians to shape the church’s stance on public-policy issues, Baumgarten noted. “One of the important things about the Episcopal Church’s system of governance is that there really is a straight line from the congregational level to the General Convention level. … Everybody has the ability to participate in the church’s discernment of where it stands on particular issues.”

This doesn’t mean that every Episcopalian must agree with every stance the church takes, as Brookhart noted.

“I think our church has the sense that we don’t expect everyone to agree with the official so-called positions,” he said, adding that there’s no “punitive side” for disagreeing with General Convention resolutions on public-policy issues.

“On the other hand,” he added, “I think it’s important to say that there are some issues that are important enough that the church needs to make a witness about it, even if a substantial minority of its members don’t agree.”

And that witness doesn’t remain at the institutional level.

Advocacy is part of the mission of every person of faith including Episcopalians, Baumgarten said. “It’s not uniquely the role or responsibility of churchwide structures or bishops or church leaders.”

“In one sense, we provide a representative face of the church in Washington on an ongoing basis,” he said. “But in the most important sense, the heart of our work, the heart of our ministry as an office, is to equip Episcopalians around the country for their own ministry of advocacy.”